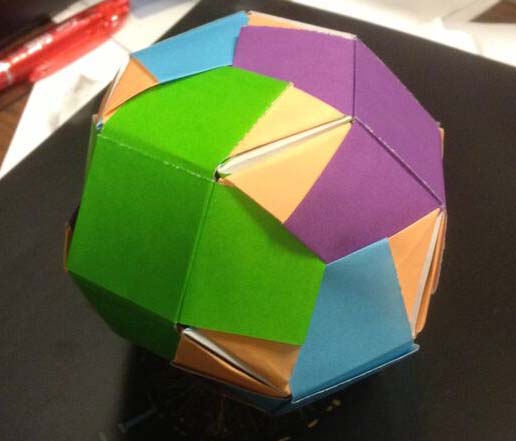 Truncated Octahedron, designed by me.  I kept this on my office desk.

Today’s model is one of my earliest original designs.   This is a truncated octahedron, which is the shape you get when you take an octahedron, and chop off the 6 tips.

I was interested in designing a model with this particular shape, because it has some special significance in condensed matter physics.  There’s a certain kind of crystal structure, called the “body-centered cubic structure”, which looks like this:

Each circle represents a single atom.  (a) shows the spatial arrangement of atoms in a single cell.  (b) shows the same thing with atoms more realistically sized.  A crystal is made up of many repeating cells, as shown in (c). Source

For technical reasons that I’m not going to bother explaining, my primary association with a truncated octahedron is not a Wigner-Seitz cell, but instead a Brillouin Zone.  Curious readers are encouraged to become physics majors and study condensed matter physics.

As far as the origami design goes, I’ve lost the design for this one!  I made it back in the day when I didn’t think to document the folding steps.  I could probably figure it out if I tried to reproduce it though.  I believe it’s made from 56 pieces: 1 per hexagonal face, 2 per square face, and 1 per edge.

My responses to TERF concerns » « The ghost of atheist past