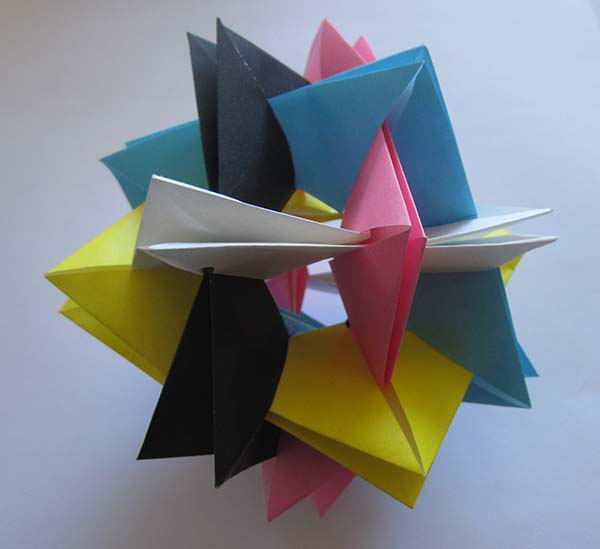 Double-pointed VWXYZ squares, a design by me

So as part of that whole thing, I wanted to make at least one model with 5 intersecting planes.  There is a design, by Francis Ow called VWXYZ Squares that does just that.  But either I couldn’t find diagrams, or I wasn’t satisfied with it, or else I just wanted to try designing my own.  So, that’s what we have here.

Mind you, this is not especially great origami design.  I would describe it the model as “delicate”, but it hasn’t fallen apart yet, so that’s something.  The fact that the points of the squares pull apart (thus the “double-pointed” in the name) was actually a surprise to me.  The hole at the center of the model was deliberate though.  The fact that such a simple design works so well is a testament to the power of planar models.

For the geometry geeks: can you figure out what polyhedron this is based on?  It’s not one of the named polyhedra, and it’s not very symmetrical.