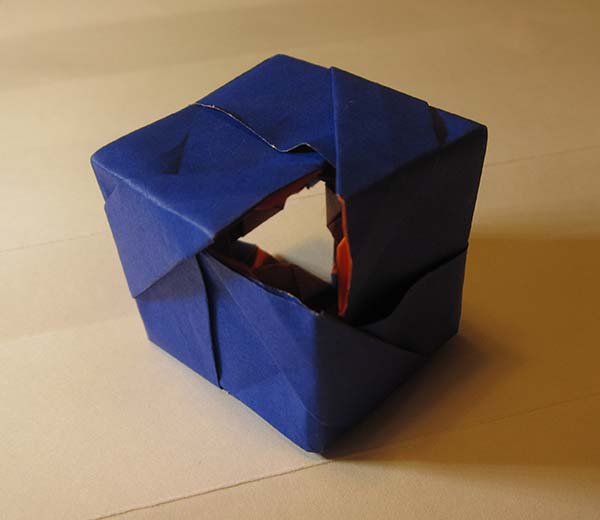 Toroidal Cube, a design by me

In case it’s not clear what’s going on in the photo, the model is in the shape of a cube, and we are looking at it directly onto one of the vertices.  However, the vertex has been cut out, and there is a triangular hole in its place.  There is also a triangular hole on the opposite end, so that you can see directly through the cube.  The triangles aren’t really triangles, but they look triangular from just the right perspective.

The mathematician Laos Szilassi proved that every regular toroid with one hole has faces that are triangles, quadrilaterals, or hexagons.  This is easy to understand if you’re familiar with Euler’s formula, which states that V-E+F=2 (where V, E, and F are the number of vertices, edges, and faces).  For a torus with one hole, Euler’s formula is modified to V-E+F=0.  If each face has A sides, and each vertex connects B edges, then we can show V=F*A/B and E=F*A/2.  Thus we have A/B-A/2+1=0.  The only possible solutions have A = 3, 4, or 6.

The toroidal cube is in the shape of one of the examples provided by Szilassi.  This isn’t the first time I’ve made a regular toroid, I also posted another one last year.  Both this model and the other one have A=6. 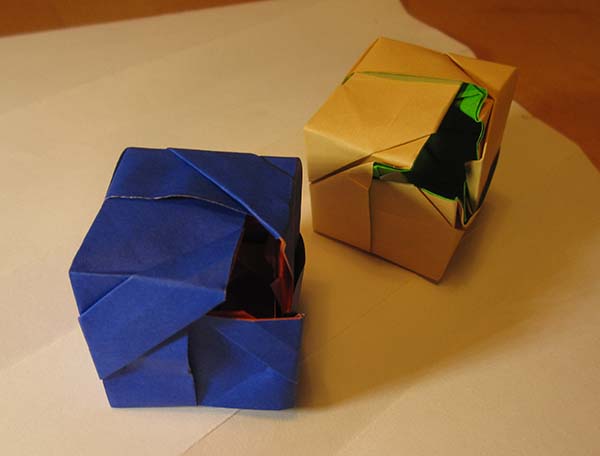 I made two of these. The one on the right has a slight modification, but I decided I liked the version on the left better.

In which I destroy marriage » « Great classics