(Content note: this is a spoiler-free review, though I can’t speak for commenters.)

The Witness is a puzzle game created by Jonathan Blow, famed creator of Braid. The central mechanic of this game is a path-drawing puzzle, which looks like this: 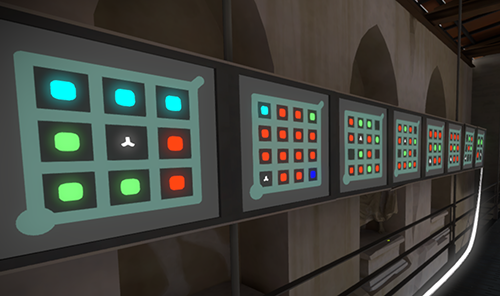 When I first saw this mechanic, my reaction was, “So adventure game designers finally discovered Nikoli-style puzzles, eh?” Nikoli is a Japanese publication that popularized a certain genre of puzzles using numbers or symbols on a grid. The best known puzzle of this genre is Sudoku, but there are many others, like Fillomino, Heyawake, Numberlink, Masyu, Slitherlink, and Nurikabe (almost all of which I think are better than Sudoku).

Outside of Nikoli, you can find many more created by Grandmaster Puzzles, and you can try the annual US Puzzle Championship. I should mention that I am fairly competitive in the USPC.

The advantage to Nikoli-style puzzles is that they’re scalable. Contrast with the Myst series, where most puzzles revolve around poorly-designed user interfaces for fantastic mechanisms. Could you really pack hundreds of such puzzles in a game? It would be too hard to write all those puzzles, much less make the graphics to support them. And since there are so few of those puzzles in the game, you have to make sure each one counts for every player, without being so challenging that players start looking for solutions online.

On the other hand, as far as Nikoli-style puzzles go, dedicated puzzle-crafters will have video game designers beat. Sorry, Professor Layton! What I want to see in a video game are puzzles that could only be done in a video game. Luckily, The Witness passes this test, being a lot less like a Nikoli puzzle than it first appears, and not just because solutions are non-unique.


The Witness is centrally a game about hypothesis-testing. In Nikoli puzzles, you are given a set of rules, and the main challenge is finding a solution which satisfies the rules. In The Witness, the main challenge is to figure out what the rules are in the first place, based primarily on feedback that tells you whether your answer is right or wrong. Clearly this is the kind of puzzle you cannot do with pencil and paper. On paper, the only person to verify the rules is yourself, and you can’t do that without knowing the rules in the first place. 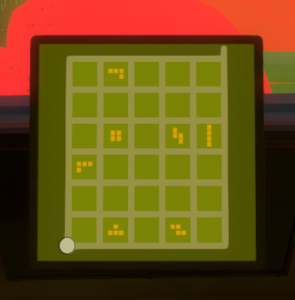 Also, I’m pretty sure some of these puzzles are NP-complete to verify correctness.

Not all the rules you discover are based on symbols in a grid. Many of the rules are about how to interpret environmental clues. For example, a nearby tree-branch might contain the solution. And then the next puzzle would involve a tree branch which has broken off. This is also a kind of puzzle that can’t be done with pencil and paper, nor is it possible in an arcade-style puzzle game.

Many reviewers are calling The Witness challenging. I will offer an alternative perspective: The Witness is easy (or it was for me). Sometimes a puzzle stumped because I didn’t understand the rules it was supposed to follow. But then I found, in another part of the game, a tutorial on those same rules, and that renders the puzzle easy. The mere fact that a puzzle stumped me at first does not mean it was challenging. It was simply a door that I didn’t yet have the key for.

Not that there’s anything wrong with easy, but I would have liked to see a few tougher puzzles–ones with large grids with unique solutions that can only be solved deductively. Or perhaps new rules could be presented with only difficult tutorials available.

Disappointingly, the game has other ideas for how to produce “challenge”.  Again and again, the game decides to make things difficult by showing you the clues on one screen, and then showing the puzzle on a different screen. Or it shows some of the clues on one screen, and the rest of the clues on a second screen. It’s as if the game is saying, “Okay, you can solve these puzzles. But can you solve them… while your short-term memory is otherwise occupied?” And of course, you can just get around that challenge by either taking notes or screenshots.

I really think The Witness would have benefited from an in-game camera, one where you can take notes on the photos (like in Myst IV). I was taking screenshots anyway–an in-game camera would surely have a better interface than me switching between windows. It also would have discouraged the use of short-term memory challenges in the game design.

Later on in the game, there is a randomized time-limited challenge. This shows lack of imagination, as if there weren’t any better ways to produce challenge.

Aside from the puzzles, I have very nice things to say about the hidden object search (which, by some accounts, is the most important part of the game). Typically, collectible items in games serve to encourage exploration of every nook and cranny. These hidden objects do even more–they encourage you to look, really look, at your surroundings. 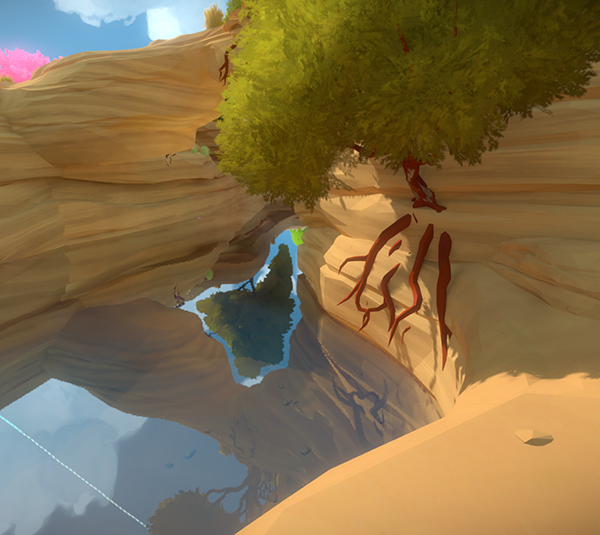 Do you see?  (No this is not one of the hidden objects.)

Aside from the visual content, I would say negative things about the textual content.  Whenever I hear an inspirational quote, my first thought is, “But have you considered… the opposite of what you just said?”  Also, at the end it turns out I’ve been a white dude all along, which is quite the twist.

Origami: Ray icosahedron » « Celibacy, and its use by asexuals