For convenience, let me summarize the results that were arrived at in the previous post of the calculations of the Poynting vector by Rohrlich for a charge Q and detector D for the following five scenarios. S represents an inertial frame (such as freely falling in a uniform gravitational field) while E is the frame of the Earth.

Scenario 1: Both Q and D are floating freely in empty space in the absence of all forces
Conclusion: D will not detect any radiation and and thus Q is said to not radiate.

Scenario 2: Both Q and D are both falling freely in a uniform gravitational field
Conclusion: D will not detect any radiation and and thus Q is said to not radiate.

Scenario 3: Q is freely falling while D is on the floor in E
Conclusion: D will detect radiation and thus Q is said to radiate.

Scenario 4: Q is on the floor in E while D is freely falling
Conclusion: D will detect radiation and thus Q is said to radiate.

Scenario 5: Both Q and D are at rest on the floor in E
Conclusion: D will not detect radiation and thus Q is said to not radiate.

Let us see how Rohrlich’s results affect the two postulates that began this series of posts:

Postulate #1: If we can eliminate all other forces such as friction, all objects that are dropped from the same height in a gravitational field will fall at the same rate and hit the ground at the same time.

Postulate #2: An accelerating charge falling freely in a gravitational field will radiate energy.

The results of Scenario 3 support Postulate #2, that the falling electric charge will radiate and that radiation will be detected by a detector at rest in the frame.

But there are still three (at least) unresolved issues.

Issue 3: This is the basic paradox that started this series of posts. If a detector D on Earth detects radiation from a falling charge (Scenario 3), that implies that the charge loses some energy in the form of radiation and thus one would expect that it will fall more slowly than a neutral particle, thus violating Postulate #1 and the Principle of Equivalence that says that all objects falling freely in a gravitational field will fall at the same rate. If it still falls at the same time as the neutral particle and thus does not violate Postulate #1, that must mean that its kinetic energy is unaffected by the emission of radiation. Does that not violate the law of conservation of energy?

While Rohrlich has done the calculations that led to the results of those five scenarios, some questions arise when we try to get a physical understanding of what is going on.

The first two issues listed above seem to suggest that we (via our surrogate the detector D) can tell which frame we are in (S or E) by noting whether the detector registers radiation or not. This would be in violation the Principle of Equivalence which says that there is no experiment that can distinguish the two cases. This becomes more acute in the photon model where any radiation is thought to consist of the emission of photons. How can a photon be detected in one case and not the other?

One hint to a solution is to observe that the situations where the detector does not detect radiation (Scenarios 2 and 5) correspond to those in which the detector is also accelerating along with the charge. In a 1980 paper that appeared in Annals of Physics 124, 169-188, David G. Boulware says that in such a situation, “all the radiation goes into the region of space time inaccessible to the co-accelerating observer”. In other words, the detector is in a region of space-time that is outside what is accessible to the radiation emitted by the charge. Others have agreed with his calculations.

I have been trying to find a way to explain what this means without bringing in a lot of the mathematics and it has not been easy. Here is the best that I can come up with, though I cannot guarantee that it is wholly faithful to those more careful analyses. 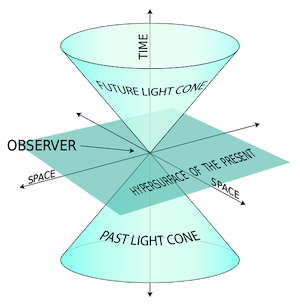 Every single event that occurs in the entire history of the universe (future and past) can be represented by a single point in space-time, since all events must occur in space-time and only one event can occur at any given location at any given time. To help visualize things, we can think of a model two-dimensional space where the horizontal axes represent the two dimensions of space and the vertical axis represents time. A ‘world line’ for any object consists of the line connecting all the points in space-time for that object, each point representing an event that occurred where the object was located. So the lives of each one of us, and indeed any object at all, can be represented by world lines that snake their way through space-time.

We have the freedom to choose the origin of the system for any object. If I choose to put myself at the origin of the coordinate system right now (i.e., I choose to put myself at x=y=0 at t=0). then there is a cone-shaped region (called the ‘light cone’) below and above the origin that encompass my past and my future. In 3D space, you have to depend on the mathematics since we cannot visualize four-dimensional space-time.

My world line would begin with my birth at a point in the past light cone and weave its way upwards within the cone (since ‘up’ represents time increasing), the shape of the line depending on how my life unfolded and where I traveled, until it reached the origin, which would be at my desk in my home in Monterey at this moment. My line would then continue upwards into the future. Each object will have a similar world line. An object that never moved would have a world line that went vertically straight up. When two people (or objects) meet, they have the same space and time coordinates at that instant. That means that their world lines intersect at that point, before then going on their separate ways.

The slope of an object’s world line gives the speed with which the object is moving, and that cannot exceed the speed of light. The curved surface defining the cones is due to the world lines of light and the slope of the curve is the speed of light. We see that there are some points in space-time (those that lie outside the future cone) that I can never reach in the future and there are some events in the past (those that lie outside my past cone) that could never have had any influence on me at this instant because in both cases it would require that I (or a signal) travel faster than the speed of light between that point and the origin. The space enclosed by the upward cone and the downward cone encompass all the regions of accessibility for me right now. Note that as time goes by and my world line moves up, there may come a time when I become aware of an event that happened in the past that is inaccessible to me now, because a signal would no longer have to travel at speeds greater than the speed of light to reach me. As an example, we know that light takes about eight minutes to reach us from the Sun. Whatever happens right now on the Sun (even if it blows up) could not have affected me now in any way. But after eight minutes, I will become aware of it.

Thus these cones do not set the boundaries of future knowledge but set the boundaries of cause and effect since any causal connection between the origin to points outside those cones would require me or a signal to travel faster than the speed of light to where I am right now. Such a limit of accessibility to events is called the event horizon. 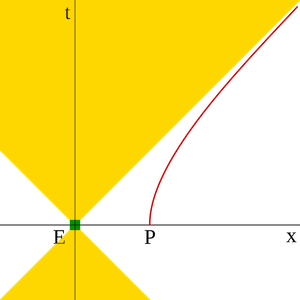 In an even more simplified model of a 1D space, we have just one horizontal axis for space and a vertical axis for time and the cone becomes a V shape but the idea remains the same. When we have an object like the detector D that has a constant acceleration g in its own frame (say by virtue of being propelled by an external constant force such as an engine or falling in a uniform gravitational field), then its acceleration as seen by an observer in an inertial frame S (which is a flat ‘Minkowski’ space), is not a constant but is given by g/γ3 where γ is the familiar Lorentz factor given by 1/√(1-v2/c2), v being the speed of D as measured in S, and c the speed of light. Hence as seen in S, the acceleration of D will start with the value of g when its speed is zero and decrease to zero as its speed approaches the speed of light. This motion of D is described as hyperbolic since the relationship between D’s space coordinate x and time t in S is given by x2-(ct)2=(c2/g)2, which is that of a hyperbola. In the figure, the curved line through P shows the hyperbolic curve of the motion of the accelerated object.

The point is that in this situation, the detector D lies beyond the event horizon of the charge Q and hence will never detect any radiation from Q, preventing D from inferring whether Q radiates or not. Hence the question of whether Q really radiates in Scenario 2 and Scenario 4 but the radiation never reaches D, or whether Q does not radiate, is an experimentally unanswerable one.

That will not be satisfactory to people who believe that we should always have, at least in theory, clear-cut answers to questions. But physics has taught us that there are some formulations of questions that simply cannot be answered, such as whether an electron is really a particle or a wave or what the precise location is of a particle is. We just have to learn to live with that state of affairs and instead formulate questions in terms of things that can be answered experimentally. So, for example, instead of asking how it is that something can be both a particle and a wave, we instead ask what the outcome would be if we do an experiment. It turns out that if the experiment is designed to detect wave-like properties (such as interference patterns), we get that the electron will display a wave-like property. If the experiment is designed to detect particle-like properties (like a particle detector), the electron will display a particle-like property. There seems to be no way to set up an experiment that will display both particle and wave properties simultaneously. To argue that it is absurd that an electron can be both a particle and a wave is to use one’s sense of incredulity to try and impose a view of phenomena that cannot be sustained and leads to seeming paradoxes.

In the next post in this series, we will look at Issue #3, which raises yet more subtle and tricky questions.