The bottom of the oceans is a mostly unexplored frontier that does not get as much attention as the frontier of space. But it does attract adventurers who seek to go where no one has gone before. On January 23, 1960 Auguste Piccard and Don Walsh went to the bottom of the Challenger Deep, the deepest known point in the world that, at a depth of 11,034m, is deeper than Mount Everest is high. But no went there again there for over a half-century until in 2012, when filmmaker James Cameron went there in a submersible. Unfortunately, the submersible had many systems failing during the trip so that, although he was not in danger, it was never used again. I blogged about this back then. No one went again for another seven years. But in the last year that picture has changed dramatically.

It began with wealthy 53-year old Victor Vescovo who was fascinated by ocean depths and wanted to go to the lowest point in each of the five oceans: Puerto Rico Trench in the Atlantic at 8,376m, South Sandwich Trench in the Antarctic at 7,433m, Java Trench in the Indian at 7,450m, the Mariana Trench in the Pacific that has the Challenger Deep, and Molloy Hole in the Arctic at 5,550m, that he was willing to put a lot of his own money into the venture. He assembled a team to construct a reusable submersible that could withstand the pressure at the very lowest point, which is equivalent to 16,000 pounds of water on a square inch. Since he wanted to be able to actually see through windows at what was outside, not just via cameras, the acrylic viewpoints had to be eight inches thick. Using this submersible that he called DSV Limiting Factor, he achieved this Grand Slam of ocean depths in 2019.

A very detailed account of all the work that went into preparing for this achievement can be found in the May 18, 2020 issue of The New Yorker magazine.

Here is a map of the journey the team took. 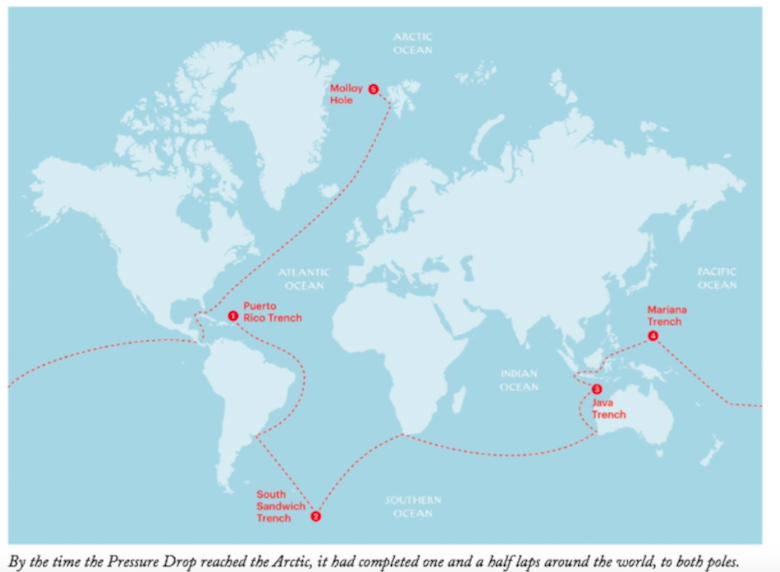 This expedition used about 100 landers that contain instruments that record what they see and sense on the way down and when on the seabed. When you go down to these extreme depths, the kinds of living things one sees can be quite different and already 40 new species have been found. Clearly the animals that can survive at these enormous pressures had to have developed novel features at even the cellular level. One of the scientists who worked on this project was Alan Jamieson who captured an image of he called a ‘dumbo’ octopus. 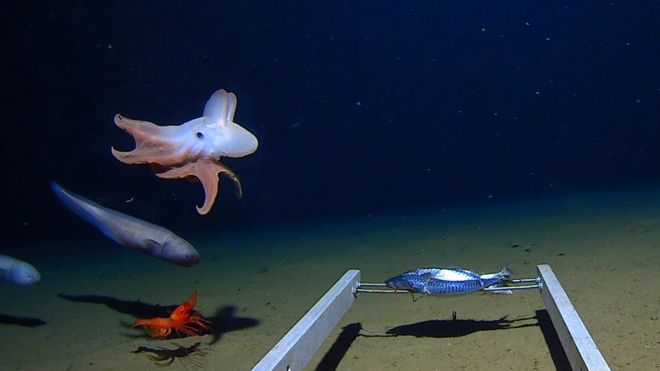 After Vescovo’s expedition in 2019, there have been many others who have done so using the same submersible DSV Limiting Factor that Vescovo’s team developed. The first woman to reach Challenger Deep is an astronaut Kathy Sullivan who, interestingly, is also the first woman to have walked in space, that she had done 25 years earlier.

Does ignoring those annoying robocalls help reduce them? » « Tropic Thunder and the problem of actors in blackface