Ohio is becoming notorious not just for producing horrific murder cases, it also leads the way in how gerrymandering produces results that do not come close to reflecting the voting preferences of its citizens and last week’s election results demonstrated this very clearly. Republican officials have abused their power to draw districts such that all the Democratic-leaning voters were crammed into as few seats as possible, leaving few left over in the other areas. The results are stark, with Republicans winning a huge majority in the state houses while actually trailing in the popular vote. 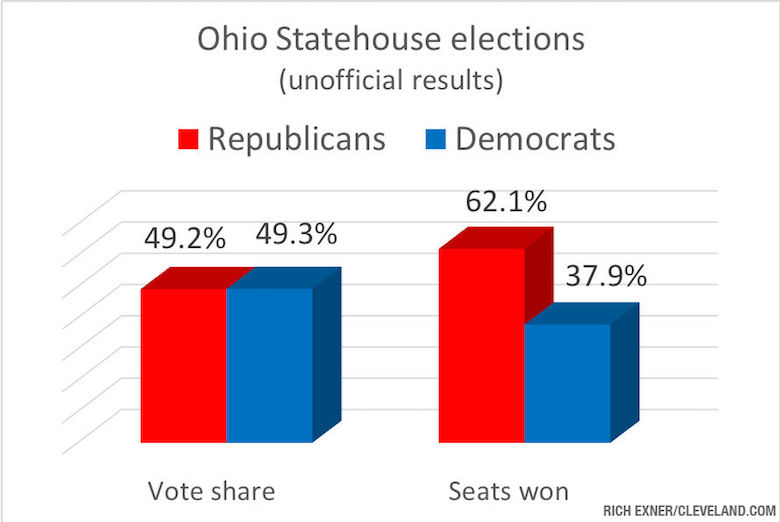 The Democrats actually collected more total votes in the 116 Ohio House and Senate elections across the state, cleveland.com found in tabulating the unofficial returns.
…

More importantly, in terms of controlling Ohio’s government, the GOP won 72 of the 116 Statehouse races.

This is a lot like what happened in Ohio’s 16 congressional districts, where Republicans won 75 percent of the seats with just 52 percent of the overall vote.
…

Despite the strong showing by the Ohio GOP, the Democrats actually did make significant gains over 2016, argues Richard Gunther, who worked on gerrymandering reform and is a professor emeritus of political science at Ohio State University.

He found the vote margin between Democrats and Republicans in Ohio’s congressional races shifted the Democrats’ way by an average of 10 percentage points. That was in line, he said, with national trends.

“Ohio did not miss out on the wave at all,” Gunther said. “The difference is that gerrymandering was so effective that the Democrats picked up no additional seats.”

But the times, they are a’changing. People are getting fed up with gerrymandered districts.

Ohioans in 2015 voted to reform the way Statehouse districts will be drawn, beginning in 2021. Then, earlier this year, Ohio voters did the same for congressional districts going forward. The votes for change were not close, passing each time with more than 70 percent support.

The separate reforms carry their own set of rules, but the gist is the same – a new set of 10-year maps cannot be approved without buy-in from both major political parties.
…

For Statehouse districts, a seven-member panel will be established to handle the process in 2021. This panel will consist of the governor, auditor and secretary of state (all Republicans as determined by this year’s election), plus two Republicans and two Democrats appointed by party leaders in the Statehouse.

A map must win approval from the two Democrats on this panel, or it will be good for only four years, not 10 years.

For the new congressional maps, the new rules are also geared toward bipartisanship:

Only if each of the first three steps fail could the majority party pass a map without minority support. But that map would have to pass additional anti-gerrymandering tests and it would be good for just four years, not the usual 10 years.

Plus, there are a lot of new restrictions placing limits on how the districts can be drawn, the goal being fewer splits of communities and geographically compact districts.

In each case, a calculation will have be made by the Republicans in charge: Is it worth pushing through a more favorable map without the Democrats buying in, if the map is only good for four years?

There is also a lawsuit underway to move the date of implementation up and force changes for the 2020 congressional elections as well.