The latest report issued by the Intergovernmental Panel on Climate Change says that we have a window of just 12 years to take meaningful steps to curb global warming. The IPCC report says that the situation is even worse than was feared and that we could adjust to an average global temperature increase of 1.5oC but no more. 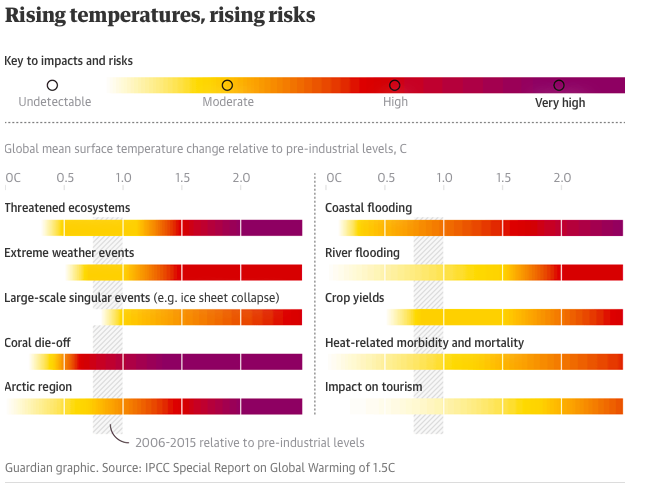 Here are some excerpts from the press release issued by the IPCC.

Limiting global warming to 1.5oC would require rapid, far- reaching and unprecedented changes in all aspects of society, the IPCC said in a new assessment. With clear benefits to people and natural ecosystems, limiting global warming to 1.5oC compared to 2oC could go hand in hand with ensuring a more sustainable and equitable society, the Intergovernmental Panel on Climate Change (IPCC) said on Monday
…

The IPCC is the source of the most reliable and comprehensive information on global warming.

To produce its reports, the IPCC mobilizes hundreds of scientists. These scientists and officials are drawn from diverse backgrounds. Only a dozen permanent staff work in the IPCC’s Secretariat.

Key statistics of the Special Report on Global Warming of 1.5oC

91 authors from 44 citizenships and 40 countries of residence.

You can read the report here.

The warnings keep getting more and more dire. Will US policymakers ever listen or will they continue whistling towards catastrophe?

Real snakes on real planes » « Songs that look back on life