No, that is not the title of the sequel to the hit film Crouching Tiger, Hidden Dragon. It refers to the artistic controversy over the recent addition of a statue of a young girl staring down the famous charging bull statue on Wall Street. 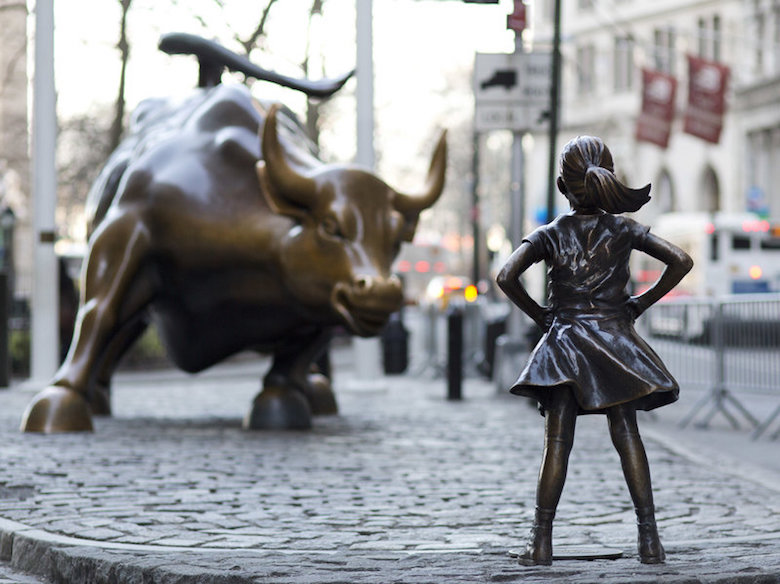 The artist who made the original bull statue is crying foul, saying that the addition destroys the meaning of his work.

“The girl is standing there like this in front the bull, saying, ‘Now, what are you going to do?’ ” the bull’s sculptor, Arturo Di Modica, said at a news conference Wednesday, according to CNN.

He maintains that Fearless Girl — sculpted by Kristen Visbal and commissioned by the firm State Street Global Advisors, which intends to call attention to a lack of women leaders on Wall Street — at once distorts the intent of his statue from “a symbol of prosperity and for strength” into a villain, and does so for the firm’s own commercial gain.

The statue of the girl was to commemorate International Women’s Day and went up last month with a temporary permit that was to have ended on April 2 but the permit has been extended until 2018. I had been under the impression that the bull had been commissioned by Wall Street and had been there for a very long time. But I was wrong.

Di Modica himself plopped his 3 1/2-ton bovine beneath a Christmas tree in front of the New York Stock Exchange in December 1989 without a permit. The Italian immigrant intended the work to bolster American traders’ spirits after the stock crash of a few years before — though the NYSE, it must be said, was not pleased with its holiday gift, hefting away the bull by the end of the day.

The Charging Bull eventually found a home two blocks away, at its current resting place just south of Wall Street.

While I like the symbolism of the girl challenging the bull, I have to agree that Di Modica has a point. Adding a new statue in close proximity to the original one, especially if it has been deliberately designed to relate to it, does distort the original artist’s conception of the piece. People who do not know that the girl was added later and think that both were one conception will draw different conclusions about what the ensemble is saying.

Simply placing new art in juxtaposition to an existing one is not the problem. Galleries do it all the time. But usually there is no obvious connection between the two works, so each one is viewed independently of the other. In this case, the two statues were not in some sculpture garden where one expects to see different items and views them as independent. In this case, the statue of the girl was placed deliberately to reference the first. It would be like if an art gallery placed right next to a Jackson Pollock painting another one that showed a child flicking paint in the direction of the Pollock. That would seem wrong somehow because then you are adding commentary to the Pollock, rather than letting the viewer make their own sense of the painting.

[By the way, those who saw Crouching Tiger, Hidden Dragon will recall that no tiger or dragon ever appeared in that film. I never did figure out what they were supposed to symbolize.]

Film review: Hell or High Water (2016) » « The astonishing story of how women got to run in the Boston Marathon