The so-called ‘pizzagate’ story gets weirder the more one delves into it. It has become a symbol of how social media has enabled fake new gets circulated widely. For those not familiar with it, the story was that Hillary Clinton and the Democratic party were running a child porn/sex trafficking ring out of a Washington, DC pizza shop. Just stating this will raise the eyebrows of even a marginally rational person, because it seems such an absurd claim on its face that it would require a high level of evidence to substantiate it. But apparently no evidence at all was necessary for the Clinton-haters, especially one person who went to the shop with a rifle to shut down this operation and shot up the place before being arrested. Fortunately there were no injuries.

Robert Mackey provides more details of how this absurd story spread and his own experience when he tried to confront the propagators.

When I learned that a man with an assault rifle had stormed into a Washington pizzeria to “self-investigate” an online conspiracy theory for which there is no evidence — that the restaurant is a front for child sex abuse involving Hillary Clinton — I decided to confront some of the alt-right bloggers who had played a role in spreading the hoax on the social network.

The gunman, Edgar M. Welch, surrendered after telling the police that he had discovered that there were no child sex slaves being held at the pizza place, Comet Ping Pong, despite the lurid fantasies he had read online about a made-up scandal known as “PizzaGate,” which surfaced just before election day. 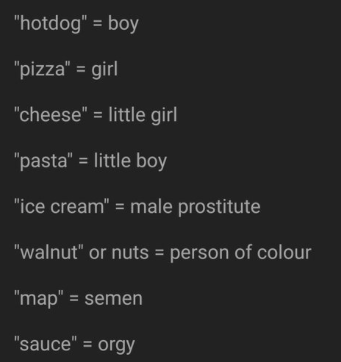 This illustrates so well the idea of confirmation bias because by very virtue of repetition, something that is totally false can become seen as true as long as the news is congenial to your own views. Adding layers of detail, however preposterous, adds to the credibility. For example, it was claimed that while people were ostensibly ordering pizza, they were using code words for what they really wanted (see right). Mackey’s article also shows how any crackpot theory can be made immune from refutation by placing the burden of proof on those denying the claim, by saying that they will believe it is true until proven otherwise. Of course, such a defense is impregnable. People can cling on to anything, however meager, to sustain beliefs, and resort to saying things like “There’s no smoke without fire” in place of actual evidence. Even when the shooter himself conceded that he had found no evidence of a crime going on, the true believers said that this was a ‘false flag’ operation, and that the shooter was actually in on the crime and trying to divert attention from it and discredit the accusers.

Where do these stories originate? A BuzzFeed investigation finds that Macedonia is the home to many such stories and that young people there, some teenagers, are making a financial killing by feeding into the fantasies of gullible Americans.

Over the past year, the Macedonian town of Veles (population 45,000) has experienced a digital gold rush as locals launched at least 140 US politics websites. These sites have American-sounding domain names such as WorldPoliticus.com, TrumpVision365.com, USConservativeToday.com, DonaldTrumpNews.co, and USADailyPolitics.com. They almost all publish aggressively pro-Trump content aimed at conservatives and Trump supporters in the US.

The young Macedonians who run these sites say they don’t care about Donald Trump. They are responding to straightforward economic incentives: As Facebook regularly reveals in earnings reports, a US Facebook user is worth about four times a user outside the US. The fraction-of-a-penny-per-click of US display advertising — a declining market for American publishers — goes a long way in Veles. Several teens and young men who run these sites told BuzzFeed News that they learned the best way to generate traffic is to get their politics stories to spread on Facebook — and the best way to generate shares on Facebook is to publish sensationalist and often false content that caters to Trump supporters.
…

“I started the site for a easy way to make money,” said a 17-year-old who runs a site with four other people. “In Macedonia the economy is very weak and teenagers are not allowed to work, so we need to find creative ways to make some money. I’m a musician but I can’t afford music gear. Here in Macedonia the revenue from a small site is enough to afford many things.”

Most of the posts on these sites are aggregated, or completely plagiarized, from fringe and right-wing sites in the US. The Macedonians see a story elsewhere, write a sensationalized headline, and quickly post it to their site. Then they share it on Facebook to try and generate traffic. The more people who click through from Facebook, the more money they earn from ads on their website.

When you combine this willingness to believe anything that they agree with with a president-to-be in Donald Trump who does not care about the truth and is willing to say anything and spread any lie as long as it meets his immediate needs, and who is backed by a Republican party that cravenly refuses to confront him on this dangerous practice, it suggests that we have entered a bizarro time where truth consists of what you want to believe and the idea of evidence has no meaning to many people.

Take a look at this interview with some of Donald Trump’s voters and the way they rationalize Trump’s reversals. Look especially at the woman at the 4:10 mark when the interviewer asks about the false claim that millions of people voted illegally, something that was spread on a fake news site and then repeated by Trump. Under questioning, the woman keeps shifting her position in order to maintain her belief. She is so sure she is right but has no idea why.

People like to quote Abraham Lincoln’s statement that you can fool all of the people some of the time to explain the current state. In the Oliver Stone documentary Comandante (thanks Matthijs!) Fidel Castro, who has a bust of Lincoln in his office, points to it and says that he disagrees and that you cannot fool all of the people for even a short time. There is always a reality—based community out there that will bring you down to Earth and you ignore them at your peril.

The list of real events that can threaten to prick the bubble these people live in is long. There is a limit to how much you can get from spinning your own fantasy world. Reality has a way of always winning in the end. And the eventual collision of fantasy with reality can be painful and hurt a lot of innocent bystanders. A hard rain’s gonna fall.