There has been much gnashing of teeth and tearing of hair about the UK voting in a referendum to leave the EU. There have been some analyses of the demographics of the vote that looked at how each of the over 300 local authorities voted and comparing that with the demographics of that area. The analysis suggests that those voting to leave were more likely to be older, less formally educated, have lower incomes, and live in areas that had smaller population densities and fewer foreign-born and unmarried people.

Kevin Drum provides a chart that breaks it down by age and shows that the desire to remain in the UK was strongest among the youngest voting age group and declined steadily with rising age, but the rate at which they voted went the other way. It is quite striking. 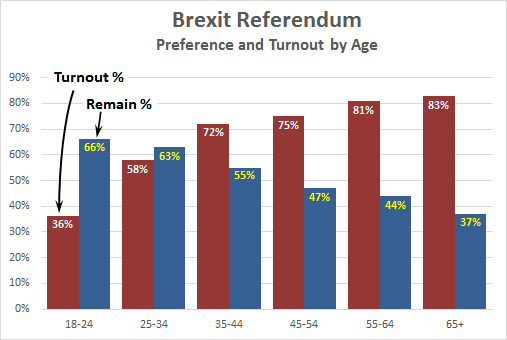 But figuring out who voted which way is easier than why they voted the way they did and there have been quite a lot of facile analyses in the media that places the blame on the British people being too stupid to understand the consequences of their actions and they have gleefully seized on anecdotal reports of people regretting their vote to leave. While it may well be true that some people simply wanted to register a protest vote under the assumption that they would lose, this kind of ‘explanation’ that resorts to blaming the voter is often more a sign of the arrogance of the elites in the political, business, and media worlds, that they alone know what is best and that the ignorant rabble is clueless and driven by fear, xenophobia, racism, and bigotry.

While fear, xenophobia, racism, and bigotry are always present and such deplorable factors undoubtedly played a role in the vote (there are reports of increased racist attacks following the vote), such impulses are unfortunately present in all of us at all times and we have to recognize that certain external conditions are more conducive than others to those feelings coming to the surface and becoming more openly manifest. ‘Explanations’ that simply split the population into the good and the bad, sensible and foolish, merely serve to deflect attention away from the culpability of the same elites in creating the conditions that had helped the growth of such deplorable attitudes.

The US Green Party’s Jill Stein issued a excellent statement that had as good and succinct an analysis of the Brexit vote as you will find anywhere and that is presented below in its entirety.

The Brexit vote reflects the rejection of neoliberalism by economically stressed voters saying no to the neoliberal agenda of austerity, corporate free trade and globalization that serves the economic elite.

The Brexit vote also reflects the deplorable and dangerous anti-immigrant, anti-Moslem, anti-refugee anger that neoliberalism generates. Economically stressed voters are vulnerable to demagoguery, and have been lulled into blaming immigrants for the economic crisis caused in fact by the economic elite.

In reality, immigrants are themselves refugees from neoliberal militarism and economic domination – and have been forced to flee their homelands in search of safety and economic survival.

The only answer to this crisis is truly progressive policies – fair trade agreements, economic equality and security including the right to a job at living wages, health care and education as human rights, the cancellation of student debt, and respect for the needs and rights of immigrants. We must honor diversity and stop causing the immigration crisis through predatory economic and military policies of neoliberalism.

In order to achieve progressive policies that can address the growing crisis, we must also demand real democracy, both in the EU and the US. Only then can we begin to create an America and a world that works for all of us, that puts people, planet and peace over profit.

Glenn Greenwald has a good round up of media reactions, both the good ones and those that reflect elite sneering of the rabble and why the elite media has only itself to blame for becoming increasingly irrelevant.

Media reaction to the Brexit vote falls into two general categories: (1) earnest, candid attempts to understand what motivated voters to make this choice, even if that means indicting one’s own establishment circles, and (2) petulant, self-serving, simple-minded attacks on disobedient pro-leave voters for being primitive, xenophobic bigots (and stupid to boot), all to evade any reckoning with their own responsibility. Virtually every reaction that falls into the former category emphasizes the profound failures of Western establishment factions; these institutions have spawned pervasive misery and inequality, only to spew condescending scorn at their victims when they object.
…

But a major factor is that many people recognize that establishment journalists are an integral part of the very institutions and corrupted elite circles that are authors of their plight. Rather than being people who mediate or inform these political conflicts, journalists are agents of the forces that are oppressing them. And when journalists react to their anger and suffering by telling them that it’s invalid and merely the byproduct of their stupidity and primitive resentments, that only reinforces the perception that journalists are their enemy, thus rendering journalistic opinion increasingly irrelevant.

This obviously has consequence for how we understand what is going on in the US with the rise of Donald Trump and the resonance of his message, such as it is, that also involves fear, xenophobia, racism, and bigotry with an extra dose of misogyny thrown in for good measure. The political and media establishment are now worried about what his rise means for the establishment political structure without closely examining their own role in facilitating that same rise.