Albert Einstein and his wife Elsa stopped off in Colombo in 1922 on their way to Japan but the visit did not receive the kind of widespread publicity in the local papers that one would have expected, given how famous he was. True, he had not as yet received the Nobel Prize. A few weeks after his visit, the announcement was made while he was in Japan that he had received his retrospectively for 1921, but he was still an eminent celebrity. I myself was not aware of this visit until a friend of mine recently sent me a link to this article that summarized what Einstein had written in his private notes about the visit and his encounter with a rickshaw, a mode of transport that has disappeared, though I remember seeing them as a child.

Notes Einstein scribbled during the trip describe in some detail how they were escorted to rickshaws and Einstein’s candid impression of what he saw in Colombo.
… 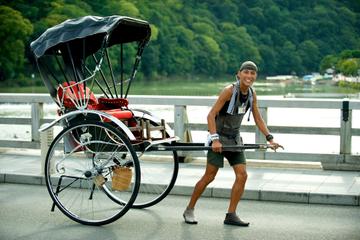 Einstein says, moment he and Elsa stepped out of the deck, a fine-boned man with a proud look and brown saliva trickling from the mouth, hauled him away exclaiming “all-round two rupee” and sat him on a rickshaw. Einstein, pointing the finger to a near by ship’s official, has protested vehemently as if it had been a fault of this officer, expressing his reluctance to get driven in a carriage pulled by a man. The official had told Einstein, what you said is true, but now you are in the Orient. In the meantime another rickshaw puller got Einstein’s wife Elsa seated and began running. Einstein shouted “stop” and asked Elsa to get down. The official intervened again, once he explained the procedure, both got into the rickshaws and were driven to streets of the Colombo City. A note in the Einstein’s diary dated 28th October 1922 reads “We rode on small one man carriages drawn at trot by men of Herculean strength, yet of delicate built. I was bitterly ashamed to be a party to the abominable treatment accorded to fellow human beings, but the circumstance did not permit me avoiding it”. However, Einstein’s wife being naturally more practical had remarked “For these men to earn a living, they need our patronage”.

Einstein says dwellers in Colombo living in poverty need little and does little but looks noble exhibiting pleasing bodily features. Unlike in the Port Said the society he saw in Colombo, seemed to be peaceful and serene but certain amount of submissiveness was noticeable. In observing these people closely, one tends to loose the taste for more degenerate, coarse and greedy European attitudes which unfortunately account for their superiority to conceive and manage big things. These inhabitants give the impression that climate eliminates the necessity of thinking about future or past for more than one quarter of an hour and wonders whether same would happen if people in his region of the world were in a similar environment. Einstein described Colombo Harbour as a busy place with workers loading and unloading cargo and divers displaying their courage and comments that they sacrifice physically to satiate others who are mean enough to enjoy. Einstein has also said that he was deeply moved when a slender man with grey beard from the Colombo harbour who came to deliver a collection of cablegrams addressed to him, impassively asked for a tip.

Christians in the US under persecution » « Too little, too late?