Zimbabwe has expressed an interest in having the dentist Walter Palmer be extradited to that country to face charges for illegally killing Cecil the lion. They have already arrested the owner of the land on which the lion was killed and the leader of the hunt.

Jonathan Turley says that the US has an extradition treaty with Zimbabwe and that the rules allow for extradition provided that the act involved is a crime in both countries. The charge in this case (hunting without necessary permits) would seem to qualify.

Any US court can hear the charge if it agrees that there is sufficient evidence to sustain the charge and that extradition is warranted, it then hands the matter over to the Secretary of State. The US government has to agree to hand the person over to the foreign government and this could be an issue. The main thing working in Palmer’s favor is that Zimbabwean president Robert Mugabe is seen in the US as such an authoritarian figure that it may be politically difficult for the US government to be seen as cooperating with him, however vilified Palmer might be.

Meanwhile, let us not forget that Palmer is by no means the only, or even the worst, person guilty of wantonly killing rare animals just for the fun of it. Turley points to another American doctor Jan Casimir Seski who is also accused of illegally hunting a lion with a bow and arrow in Zimbabwe. His guides have also been arrested.

Then take a look at the ‘trophy room’ (a strange name for what is effectively a tomb) of a Texas oilman Kerry Krottinger. 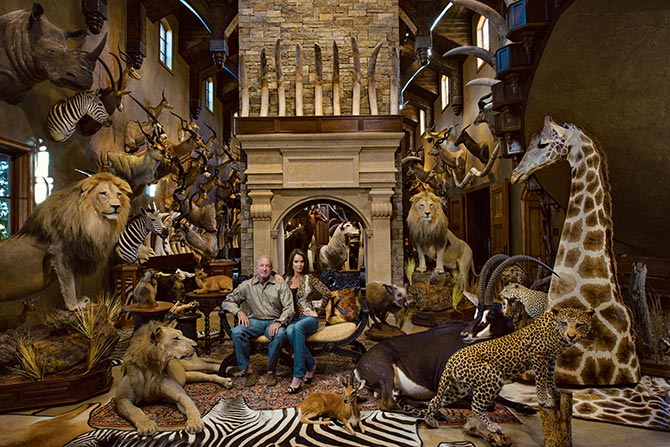 One can see how this can lead to a kind of competition among people with a particular mindset, each one of these Hemingway wannabees seeking to outdo the other in the number and kinds of magnificent exotic animals that they have ‘taken’ (the euphemism trophy hunters use for killing) as trophies.