In the wake of the murders in Charleston, SC, even president Obama seems resigned to the fact that there seems to be little or no chance of even slightly reducing the ease with which lethal weapons are available to practically anyone so that they can engage in carrying out their violent fantasies. As a result we are reduced to rhetoric and symbolism, such as calls for the confederate flag to be removed from its mast on the state capital grounds

John Oliver goes further in suggesting what can be done about the flag.

But even this step this will not be easy. People are inordinately attached to symbols. Consider how fiercely people in Cleveland rebuff attempts to dump their racist Chief Wahoo. And we are talking about an ugly mascot for a damn baseball team. But the fact that Mitt Romney, Jeb Bush, Scott Walker, and even South Carolina Nikki Haley are calling for the flag to come down is a welcome sign. During her remarks, she was flanked by “Charleston Mayor Joe Riley, the heads of both major political parties in the state and U.S. Sens. Lindsey Graham and Tim Scott, and U.S. Reps. Jim Clyburn and Mark Sanford.” Graham and Scott had waffled earlier on this and it seems like their presence indicated an endorsement of Haley’s call. It will be interesting to see if the other Republican candidates join in or try to use this to differentiate themselves from Bush and Walker, the presumptive front-runners for the Republican nomination.

[UPDATE: A prominent leader of the Southern Baptist Convention Russell Moore and Southern Baptist Theological Seminary President R. Albert Mohler Jr, both prominent conservative evangelicals, have called for the removal of the flag.

UPDATE2: Walmart has announced that it will stop selling any merchandize that has the confederate flag on it. This could start a snowball effect among retailers.]

It was also encouraging to see an estimated 15,000 people of all races join hands and march yesterday near the church where the killings occurred. 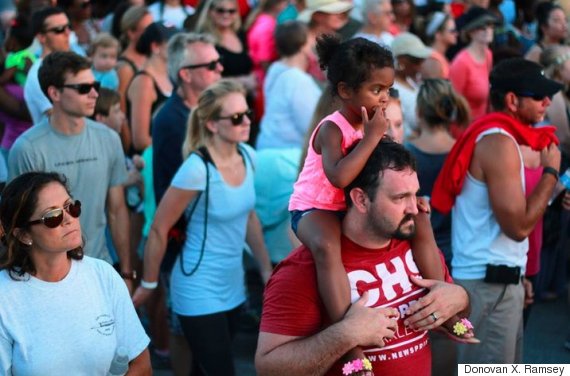 A possible meeting of the minds on same-sex marriage » « How could people do something like this?