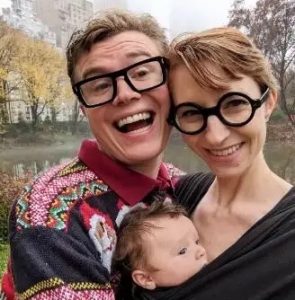 Look to the right. If you ever wanted to see a pair of gold-plated smirking morons, there they are. Those two, Malcolm and Simone Collins, were cooked in the crucible of weird Silicon Valley culture — he was a manager at Google, while she worked for Peter Thiel — and they came up with a techno-fetishist cult built on their misunderstanding of science. It’s a horror story.

Googleplex, the Google HQ in Mountain View, California, is an incubator for new religious movements. Ten years ago, Google hired Ray Kurzweil, prophet of the Singularity. In 2015, Google engineer Anthony Levandowski started The Way of the Future, a church to worship super-intelligent AI. And now we have the Religion of the Future Police, began by former Google manager Malcolm Collins and his wife Simone.

The Collinses came to my attention last month, thanks to a great article by Julia Black in Business Insider, called ‘Can Super Babies Save the World’. They’re the founders of pronatalist.org, and part of a pronatalist movement growing in Silicon Valley and around the world. Pronatalists think the world is facing a population crisis: not too many people, but too few. They think civilization is threatened because of lowering birth rates, ageing populations and plummeting male fertility (average sperm count fell 50% between 1973 and 2019, and no one is sure why).

OK, I might be persuaded that the carrying capacity of the planet might be somewhat greater than the current number of 7.9 billion, but only if there was a more equitable division of wealth — the rich are resource hogs — and if we made a concerted effort to develop more sustainable technologies. Somehow, I don’t think a pair of smug Silicon Valley smegholes would go along with that. I also think that all you have to do is examine the dismal prospects of climate change and environmental decline to see we can’t sustain the current population, so blithely suggesting we can just increase it more without consequences is insane.

Also, can I just say that naming your cult The Religion of Future Police sounds rather fascist?

These people are basically long-termists who are open about one of their goals. They aren’t just trying to expand humanity as a whole, they specifically want their own personal lineage to take over the world.

as long as each of their descendants can commit to having at least eight children for just 11 generations, the Collins bloodline will eventually outnumber the current human population. If they succeed, Malcolm continued, ‘we could set the future of our species’.

Their math is sort of right – 8 kids per child per generation for 11 generations is 8,589,934,592, or 8½ billion descendants. Imagine pressuring your children with the requirement that they must have at least 8 kids each! Unfortunately, they don’t carry through on the calculation. Since each generation after the first is only going to be half Collins (unless they’re also going to encourage incest), the individuals in that last generation are only going to be 0.0098% Collins, assuming there’s no interbreeding at all, which is unlikely given they’ll constitute a population of over 8 billion people. It’s a silly and innumerate endeavor. 99% of that 11th generation are going to be derived from genetic contributions from all the other people on Earth, and with any luck they’ll completely dilute out the taint of the Collins Family insanity.

They’re also open about trying to ‘improve’ the genetics of their children with crude engineering. Very crude. They don’t know what they’re doing at all.

They’re making children through IVF, which produces as many as a dozen fertilized eggs in a dish which can then be implanted back into Simone. A cell can be taken from each developing embryo and subjected to sequence analysis, and then they pore over the list of alleles and pick the very best super-baby combination. Or they think they do. We can’t do the kind of prediction of traits from raw genomic data that they are imagining.

Probably the most controversial part of their plan is their embrace of genetic enhancement for their children, something which they say is a secret pursuit among the tech rich. ‘We are the Underground Railroad of ‘Gattaca’ babies and people who want to do genetic stuff with their kids,’ Malcolm said. They used a company called Genomic Prediction, started by physicist Steve Hsu, which offers polygenic risk scores on embryos. Julia Black writes:

Though Genomic Prediction’s “LifeView” test officially offers risk scores only for 11 polygenic disorders — including schizophrenia and five types of cancer — they allowed the Collinses to access the raw genetic data for their own analysis. Simone and Malcolm then took their data export to a company called SelfDecode, which typically runs tests on adult DNA samples, to analyze what the Collinses called “the fun stuff.”

Sitting on the couch, Simone pulled up a spreadsheet filled with red and green numbers. Each row represented one of their embryos from the sixth batch, and the columns a variety of relative risk factors, from obesity to heart disease to headaches. The Collinses’ top priority was one of the most disputed categories: what they called “mental-performance-adjacent traits,” including stress, chronically low mood, brain fog, mood swings, fatigue, anxiety, and ADHD. With a large number of green columns and a score of 1.9, Embryo №3 — aka Titan Invictus (an experiment in nominative determinism) — was selected to become the Collinses’ third child.

Oh god, Stephen Hsu? they’re taking genetic advice from a racist physicist? All the traits they think they are selecting for are complex polygenic behavioral phenomena, products of currently uninterpretable combinatorial interactions. They think they’re being rational and logical by making choices based on numerical scores, but it’s all garbage in, garbage out.

Cocky little ignoramuses, aren’t they? Just the sort to base their life choices on a religion.

I wondered how they were paying for all this gee-whiz techno pseudo-science? Easy. They’re running a religious grift.

Today they live in a farmhouse in Philadelphia with three children and a fourth on the way. They’re launching a VC fund and accepting enrollments for The Collins Institute School for the Gifted, a $20,000-a-year course in homeschooling which teaches students math, coding, how to pitch, how to run successful email campaigns, and other life-skills. They’re also running a match-making service for alpha adults, and they’ve launched their own religion with an elaborate theology described in a GoogleDoc.

They’re selling a $20,000 course in homeschooling! You know, sending your kids to a public school is a better investment — they’ll get qualified teachers who are regularly assessed, and a curriculum set by state standards. I know, sometimes public schools can be awful for many kids, but it’s not because they lack a good framework. It’s because other people can be assholes.

A homeschool run by those two arrogant know-nothings, though, is guaranteed to have an enriched population of privileged assholes.

Their status as confirmed assholes can be determined by reading their Collins Family Theology document. It’s a turgid, pretentious mess that makes sweeping pronouncements about human nature, bolstered by a few citations to short science articles which I can tell you, he uses inappropriately. Malcolm Collins has a painfully linear and determinist view of genetics. For instance,

Our culture also resists instinctual attachment to biological identity, instead contextualizing children as more “us” than we—our present biological bundles—are. Consider that each biological kid you have is 50% you. As soon as you have more than three kids, there is more of your biological identity (1.5X) in them than there is in you.

By coincidence, I happen to have three kids. That does not mean 1.5 copies of me exist — each one is a unique combinations of genes and experience. You cannot quantify “biological identity” in that simple-minded way!

What they’re doing is building a relabeled version of eugenics, based on the same conceptual errors as the original eugenics. They’re making the same horrific categorizations that the Nazis did. If you don’t accept their views, then you’re a husk — something non-human.

They call their religion ‘secular Calvinism’ — interestingly, the scientist JBS Haldane called eugenics ‘scientific Calvinism’ in the 1920s. They believe the ultimate good in the universe is ‘sapience’. More humans = more sapience. More educated and more free-thinking humans = even more sapience. Intelligent, free-thinking humans are better, according to this theology, than conformist dull-witted herd-humans, or what the Collinses call ‘husks’:

we call them a “husk” because when someone halts the process of creative destruction — refusing to explore, weigh, and sometimes to accept new ideas — they stop being meaningfully human (in our House’s view, at least).

When eugenicists say that people who think differently to them are ‘husks’ who have ‘stopped being meaningfully human’, that’s a red flag folks!

To make it a little bit worse, their kids are taught to idolize the Future Police, an imagined population in the far distant future who are looking back and judging them for how well they assist their destiny in coming to be.

Future police as a family tradition are also very useful in conveying more complex concepts exemplifying our Secular Calvinist cultural framework (such as predestination, the future that must come to pass, and the Elect) in ways that a child can easily understand. For example, it is easy to explain to a kid why the Future Police have no motivation to protect an individual who lives only for themselves or their immediate community instead of the future of the species and their family. The concept of Future Police can be used to teach kids to constantly consider how their actions impact humanity in both the near and distant future.

Future Police also allow for fun family holiday traditions. For example, at the beginning of each year, our family has a celebration in which we combine common New Year’s traditions (such as making commitments to the future) with Future Police motifs, encouraging our kids to “prove their dedication to the future” to these distant descendents in order to curry their favor and secure gifts and privileges.

“Fun.” And then they all join in a rousing chorus of Tomorrow Belongs to Me. I call it terrifying children with threats of the Future Police judging them for failing to curry favor. This is just the same old fucked-up Christian guilt-trip.

Sure, Googleplex is an incubator for new religious movements, but they’re all loony as hell, all seem to converge on the same ol’ authoritarian cultishness, and I hope they all die and fade away.