About a year ago, there was some sensational science news: the approximate time of year that the big dinosaur killing cataclysm occurred was determined. It was in the Northern hemisphere spring. That’s kind of cool.

Paleontologist Robert DePalma speaks about the fossil evidence discovered which support the impact event believed to have wiped out most of the dinosaurs almost 66 million years ago at the Goddard Space Flight Center in Bldg 28.

Now a small scandal has sprung up, one that doesn’t change the conclusion at all, but does highlight the fact that some scientists can be colossal jerks. It seems that one paleontologist, Melanie During, came up with the evidence to support that conclusion, and talked about it with a colleague, Robert DePalma, who quickly threw together a sloppy paper to scoop her.

In June 2021, paleontologist Melanie During submitted a manuscript to Nature that she suspected might create a minor scientific sensation. Based on the chemical isotope signatures and bone growth patterns found in fossilized fish collected at Tanis, a renowned fossil site in North Dakota, During had concluded the asteroid that ended the dinosaur era 65 million years ago struck Earth when it was spring in the Northern Hemisphere.

But During, a Ph.D. candidate at Uppsala University (UU), received a shock of her own in December 2021, while her paper was still under review. Her former collaborator Robert DePalma, whom she had listed as second author on the study, published a paper of his own in Scientific Reports reaching essentially the same conclusion, based on an entirely separate data set. During, whose paper was accepted by Nature shortly afterward and published in February, suspects that DePalma, eager to claim credit for the finding, wanted to scoop her—and made up the data to stake his claim.

Well, yuck…but on the bright side, independent corroboration of the conclusion is a good thing, right? Not so fast.

After trying to discuss the matter with editors at Scientific Reports for nearly a year, During recently decided to make her suspicions public. She and her supervisor, UU paleontologist Per Ahlberg, have shared their concerns with Science, and on 3 December, During posted a statement on the journal feedback website PubPeer claiming, “we are compelled to ask whether the data [in the DePalma et al. paper] may be fabricated, created to fit an already known conclusion.” (She also posted the statement on the OSF Preprints server today.)

The plotted line graphs and figures in DePalma’s paper contain numerous irregularities, During and Ahlberg claim—including missing and duplicated data points and nonsensical error bars—suggesting they were manually constructed, rather than produced by data analysis software. DePalma has not made public the raw, machine-produced data underlying his analyses. During and Ahlberg, a member of the Royal Swedish Academy of Sciences, question whether they exist.

DePalma refuses to release the raw data, which is a big red flag. Also another big problem: DePalma literally owns the site with all the fossil data!

DePalma holds the lease to the Tanis site, which sits on private land, and controls access to it.

I find that disturbing. He bought up the lease and controls who has access to the specimens and data? I can’t be the only one who finds that troubling. Maybe he’s a hero who snatched it up to protect it, and lets anyone who asks do research there, but then…uh-oh, another ugly revelation. Someone who knew him well for many years has come out to say that he’s a creep. 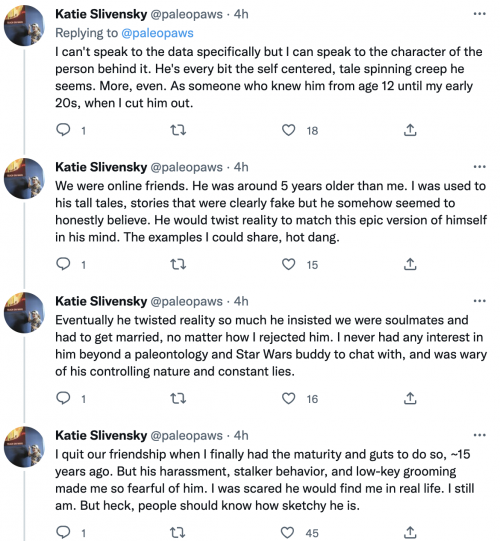 DePalma has a different perspective on the whole affair, but the timing of publication and the fact that the paper has many errors and that the raw data is hidden away leaves me suspicious. Also that he is trying to turn the tables and claim that During stole his ideas.

DePalma characterizes their interactions differently. He says his team came up with the idea of using fossils’ isotopic signals to hunt for evidence of the asteroid impact’s season long ago, and During adopted it after learning about it during her Tanis visit—a notion During rejects. After his team learned about During’s plan to submit a paper, DePalma says, one of his colleagues “strongly advised” During that the paper must “at minimum” acknowledge the team’s earlier work and include DePalma’s name as a co-author. DePalma says his team also invited During’s team to join DePalma’s ongoing study. “During the long process of discussing these options … they decided to submit their paper,” he says.

Collaboration and open communication are an essential part of the scientific process. This whole conflict would go away if the data, and the field site, were shared openly, but someone seems to be hoarding all that. It’s a shame, too, that such interesting work and such a spectacular fossil site are being tainted by this ugly possessiveness and grubbing for priority.

How old is that kid, anyway? » « At least they weren’t Nazis