Nowadays they send idiotic mail to harass you, instead of a pair of idiots. I miss the personal touch. So yes, I got some mail. 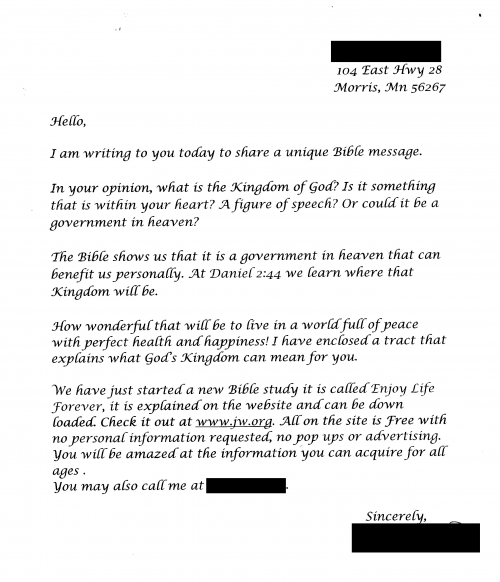 I didn’t censor out the return address, because that’s not a private home. That’s the JW Kingdom Hall here in Morris, go ahead and stop by and knock on their door.

To answer their question, though: no, the “kingdom of god” is an archaic fantasy, a myth built up by people who couldn’t imagine an alternative to their own situation, living in the city-states of the ancient Middle East. I don’t believe in a heaven, but if I did, it would be a decentralized anarchic association of individuals with no kings, and also no angels or devils.

Also, my correspondent is only telling half-truths. Daniel 2:44 says,

And in the days of these kings shall the God of heaven set up a kingdom, which shall never be destroyed: and the kingdom shall not be left to other people, but it shall break in pieces and consume all these kingdoms, and it shall stand for ever.

It’s not very specific, although it implies that God’s kingdom is going to be an earthly one, set up to compete and defeat all other kingdoms. It seems to be a rather primitive conception, don’t you think?

Yes, they included a tract, in that classic, easily recognized Jehovah’s Witness style. 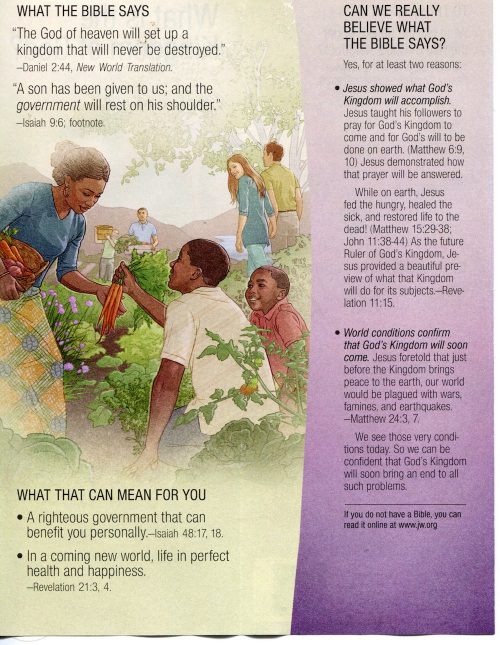 Sorry, that doesn’t persuade at all. It’s a lot of empty promises of a utopia, and the only evidence cited for it all is the Bible. Typical. The Kingdom Hall is only about a kilometer away, I oughta walk over there and give them a copy of Cat’s Cradle, and throw them into the chaos of Bokononism. They’ll be better people for it.

How are your cryptocurrency investments holding up? » « Losers!