Richard Dawkins got a major fluffing from The Times this weekend, and I don’t care enough to try to get around the paywall. Sorry. We all know what kind of conservative BS he’s going to say, and the worst of it (I hope — if there’s worse in the article, I don’t want to know about it) is right there up front in the blurb, and in the title, even.

This doesn’t even make sense. Pretty damn binary — so he’s adding vague qualifiers to something he wants to assert is only one thing or another. Everything is black and white, as long as those shades of gray get ignored, I guess. Let’s also ignore the fact that there is a wide spectrum within each sex, with femaleness and maleness having huge individual variation, with overlap. These are forced categories. You’ve decided that, by definition, there are only two possibilities allowed, therefore everyone must be wedged into one or the other, and you look with horror on the boundary conditions that show your classification scheme is inadequate.

What does he think should be done with individuals who are in the pretty part of his damn binary? Shall we just ignore them, pretend they don’t exist, maybe torture them into non-existence so they don’t clutter up your boundaries?

Good grief, he’s an evolutionary biologist. Does he also insist that species are pretty damn binary, you’re either a member of one or not, and there are no individuals who fall into any kind of hybrid state? Embrace the blurriness of the boundary conditions. That’s where all the interesting stuff happens.

I am privileged to see the opening paragraphs of the article. I don’t need more.

There’s not much that frightens Richard Dawkins. He shrugs off his regular hate mail from angry evangelicals, occasionally taking to YouTube to read it aloud. He has never backed down from his withering criticisms of Islamic fundamentalism, despite the potential for blowback. He’s happy to pick intellectual fights with eminent fellow scientists and has even been known to find fault (hard to imagine, I realise) with the odd journalist or two.

But Dawkins tells me there are two things he does fear: one is being cancelled by the left. The other is hang-gliding. I think he’s probably in more danger from the former.

There is so much hand-wringing on the right about getting “cancelled”, whatever that means. It seems to be a rather ineffectual state in which some people stop treating you as a demi-god and are more willing to criticize what you say and do, and it’s only a threat to people who consider themselves deserving of uncritical adulation.

By that definition, sorry, Richard. You were cancelled long ago, as were we all. If not by one group, by another (like, say, the American Humanists). Get used to it.

By the way, this photo was embarrassing. 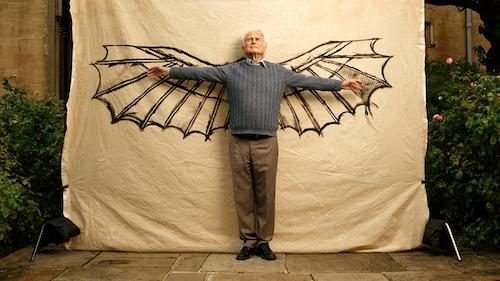 I will charitably assume that it was the newspaper’s idea to put him into a christ-like pose, but really, Richard, you can say no. Tamp down that ego a little bit and just realize that an occasional fit of humility will serve you better nowadays.

Every spider is as brilliant as it needs to be! » « Owen Strachan needs to get out more