I have never understood the aversion. Is it because I learned the term as part of Science Latin (all scientists get to learn a crude pidgin version of Latin that lacks all grammar rules and has a limited vocabulary, you know) where “cis” just means “on the same side”? It’s common parlance in structures in organic chemistry and regulatory logic in molecular biology. There’s nothing pejorative about it. When I learned it’s also used to describe someone whose gender identity is the same as the sex they were assigned at birth, yeah, sure, it made perfect sense. I’m a cis person. You can call me that and I won’t be offended at all. Some people are trans, they don’t identify as the sex on their birth certificate, and that’s fine, perfectly normal, “trans” is a nice short word to describe that.

Hmmm. Maybe that’s why some cis people are outraged at being accurately described, because the word also implies the normal categorical existence of trans people.

Anyway, how determined are these people to dodge the awfulness of being called “cis”? They’re trying to appropriate other words for their condition, to hilariously offensive results. 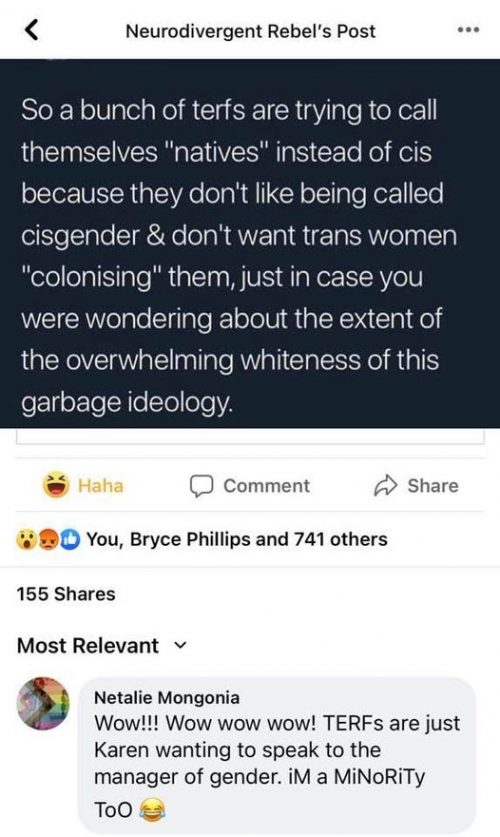 You’d think they’d figure out that abandoning the neutral, innocuous term “cis” to use a different word with an immense amount of baggage is a bad idea, but if they were smart they wouldn’t be TERFs.