For those who don’t know, Todd Stiefel is a wealthy philanthropist who has been giving money to atheist organizations for over a decade. It seemed a good and noble use of his money, but now I don’t know — maybe it wasn’t about the cause so much as it was a cult of personality. He is deeply peeved that anyone would disagree with Richard Dawkins, and is going to use his money to punish those who question his words. 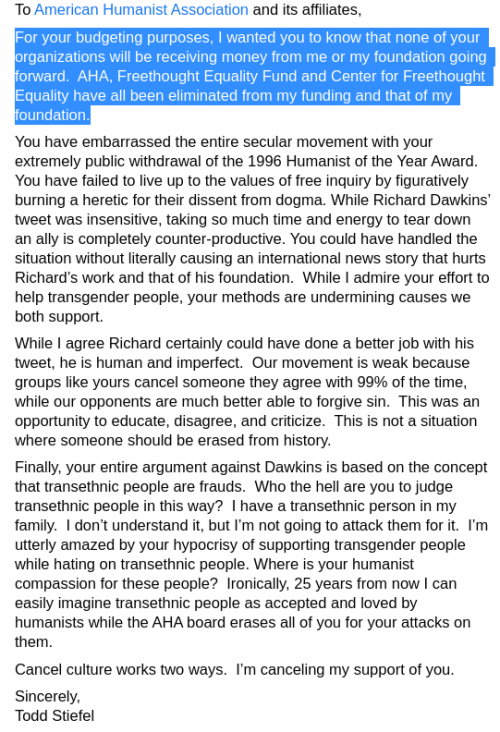 Wow. He will not support organizations that criticize Richard Dawkins — that is his right, of course, no one is going to compel him to donate to non-Dawkinsite organizations — but it’s still a chilling comment. Is there a loyalty oath or statement of faith attached to any grant from the Stiefel foundation? This is exactly what I never wanted to see happen to atheism, that it become a dogma attached to a figurehead, no matter who it is. The details of that letter are ill-thought out, too.

He’s unhappy because the American Humanists were “extremely public”. I don’t know what that means. Did they put on a parade or put up a billboard? No, they issued a mundane press release, kind of the minimum statement to explain a change in their policy. What were they supposed to do, shut up and be silent and not criticize Richard Dawkins at all? As Stiefel writes further down, this was “an opportunity to educate, disagree, and criticize”…which is what they did! They made a statement that said, “Richard Dawkins has over the past several years accumulated a history of making statements that use the guise of scientific discourse to demean marginalized groups, an approach antithetical to humanist values”, and removed an honorary award because he no longer represented the values of the organization. That’s it.

To Stiefel, this is “figuratively burning a heretic.”

He goes on to claim that Dawkins is “canceled”, an over-used, meaningless term that right-wingers love. Likewise, he implies that Dawkins has been erased from history. Hyperbole much? Dawkins is still selling books, still being invited to speak, is still living a comfortable upper class life, and still has mobs of fawning acolytes, as we can see above. I am appalled that atheism is now supposed to have idols.

I’m not even going to discuss his entire “transethnic” excuse, other than to point out that Dawkins was using the term entirely according to this definition: “a racist transphobic trolling and derailling tactic deployed when trans oppression is being discussed”. While maybe there are contexts — complex, fraught contexts — where it can be discussed reasonably, a Twitter fart from Richard Dawkins is not one of them.

This has been an issue with Richard Dawkins for over a decade, and he has learned nothing, and gotten worse, if anything. He is still defending his anti-trans stance for which AHA rebuked him.

Dawkins, however, disagrees. He is, he said, not a misogynist, as some critics have called him, but “a passionate feminist.” The greatest threats to women, in his view, are Islamism and jihadism — and his concern over that sometimes leads him to speak off-the-cuff.

“I concentrate my attention on that menace and I confess I occasionally get a little impatient with American women who complain of being inappropriately touched by the water cooler or invited for coffee or something which I think is, by comparison, relatively trivial,” he said.

“And so I occasionally wax a little sarcastic, and I when I have done that, I then have subsequently discovered some truly horrific things, which is that some of the women who were the butt of my sarcasm then became the butt of really horrible or serious threats, which is totally disgusting and I know how horrible that is and that, of course, I absolutely abominate and absolutely repudiate and abhor.”

Man, Islam is still his excuse for everything. Hey, you American women, shut up and stop complaining about being groped at work or treated sexually in professional situations. Don’t you know Muslim are horribly abused? He still hasn’t grasped the fallacy of relative privation. He still thinks he’s a passionate feminist even as he suggests that women ought to accept that their co-workers get to touch them inappropriately.

Hey, Richard! Stop complaining about being snubbed for an honorary award! Don’t you know that transgender women are still being murdered by Christians, and good Christian lawmakers are busy writing laws to oppress them further, right here in America, and in the UK, too? By comparison, everything that has happened to you is relatively trivial.

When you “wax a little sarcastic”, and discover that your zealous followers are being totally disgusting, do you ever retract and apologize? Have you ever apologized to Rebecca Watson, who is still clearly occupying a quadrant of your great brain? Do you abominate and absolutely repudiate and abhor the fact that you, personally and directly, blacklisted her from any conference that invited you to speak?

Does Todd Stiefel realize that Dawkins has consistently failed to live up to the values of free inquiry?

They crossed the streams! » « The tragedy of being a spider