Emergency surgery: the patient, a handsome Mozambique tilapia in the prime of life, was trapped inside a maze of tunnels, an environment not compatible with life. Medical scans revealed its location, but it was deep and too large to be easily extracted. 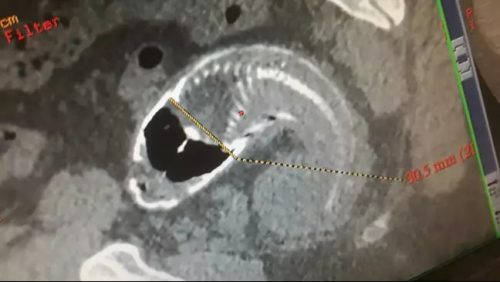 The only solution was to go in and widen the tunnels. When they finally got to the fish, though, it was too late. It had expired.

It may have been dead for a while, and its location was not exactly conducive to preservation.

To make matters even more disgusting (if that’s possible), medics were reportedly gagging at the smell in the operating theatre.

Tragic and horrifying. O Poor Tilapia! We grieve for you.

The question remains: how did this terrible event happen to the fish?

When a nurse questioned him on it, the patient claimed he’d ‘accidentally sat on’ the fish, which then entered his body via his anus.

A chat transript has circulated on China’s social media service Weibo. It states that the healthcare worker responded, saying: “Do you think I’m an idiot?”

People, look before you sit down. You never know when a fish might be sitting in your chair. From the perspective of any innocent small animal taking a break on your office chair, you’re just an ominous stinky dark hole lowering itself to engulf anything on the seat.

The COVID-19 crisis is an opportunity for charlatans on all sides » « Creationist bashing opportunity!