Yesterday, I made the long drive to St Paul to to talk to a small group at Minnesota Atheists about some entertainingly bad science, and explain why it’s bad science. While I was there, I talked with August Berkshire for a bit, and he knows I’ve been despairing of the state of the atheist movement (David Silverman’s behavior is just the most recent example of trouble), and he tried to reassure me that American Atheists is getting back on track. August is a good guy, a long-time local leader of the atheist movement, and Minnesota Atheists has always been an inspiration — they’ve never questioned a commitment to social justice as part of atheism. They’re good people and I’ll always listen to August’s opinions.

We drove away at the end with good feelings, and then I made the mistake of reading Twitter. No, never do that if you want to retain some vestige of joy. I discovered that…Richard Dawkins has spoken again. 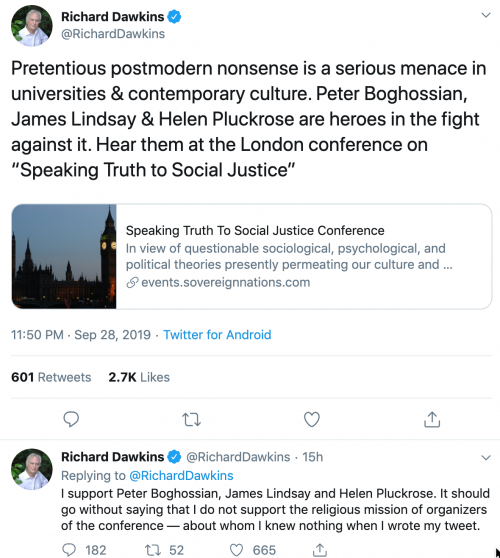 He’s endorsing a conference by something called Sovereign Nations, and just the name of the organization ought to set off klaxons, sirens, and alarm bells. I had to check, and it’s as bad as my first impression told me it would be. Sovereign Nations is a Christian Nationalist front by a guy named Michael O’Fallon. As near as I can tell, it’s one of those things where a rich conservative decides that he’s a leader of a movement and he starts hiring speakers and contriving conferences to support his views, sort of like another Travis Pangburn (who, by the way, is now tweeting climate change denialism). It’s great for the grifters who will leech off of him for a while, but there’s no there there, and we can expect it all to collapse like a flaccid balloon soon enough.

Meanwhile, O’Fallon is spewing the most awfully written glurge. Dawkins, who if nothing else is a phenomenally lucid writer, ought to be curling up in shame at endorsing a guy who could write this:

The purpose of Sovereign Nations is best understood as a prolegomenon to the formation of a new, and not just sentimental, conservative and Constitutional Republic. Sovereign Nations serves as an exploration of the intellectual viability of the conservative political habitat, with a view to establishing the groundwork for the construction and elaboration of a broader and more comprehensive vision for the movement in relation to the exegetical intent of our founders through the national founding documents. The essential precondition for a renewed conservative engagement with intellectual life is confidence in its own coherence and credibility.

As can be seen over the past 8 years, the goal of Open Society Foundations is to demean and destroy the tenets of traditional conservatism and thus create a crisis of conscience within the mind of the conservative. In order to succeed, we must rebuild the confidence in the presuppositions of conservatism in all of its exercised forms including in economics, civil liberties, family, sovereignty, theology, rule of law, and foreign affairs. What was once heresy is now law and what was once law is now heresy. The issue for progressive Open Society Foundations is that their new “law” has no foundational presupposition.

It is our hope to engage with the ideas and concepts that are at the center of Open Society Foundations without descending into ad hominem argumentation. We would seek to be upfront with our disagreements, respect our philosophical and ideological opponents, and look forward to creating a common ground of open discussion.

The first-century B.C. poet Virgil stated, “Fortunate is he who understands the hidden causes of things.”

This statement is as brilliant today as it was 2,000 years ago. Why has the entire foundation of law and justice been cast aside in an all-out embrace of Marxist-sourced social justice conformity?

Why have the Judeo Christian concepts of freedom and liberty been thrown into the ash heap of history as the nations of the earth sprint toward the chains of global manipulation?

Will the United States succumb to open borders and the manipulation of leftist billionaire George Soros?

Well, wasn’t that a lovely collection of right-wing buzzwords? He’s also, as you might expect, vigorously pro-Trump.

Knowing that President Trump has been dragged through the mud and his reputation has been sullied and attacked viciously by the Open Society Foundations, the progressives they fund and their media proponents – but he has not backed down – has shamed all of us who react in fear instead of purpose. We must follow Trump’s example.

This isn’t his first conference, either. In January, he promoted something called Social Justice & the Gospel: the God-Breathed Hierarchy and the Postmodern Crisis Within the Church. In 2018, he hosted something called Identity Politics & The Marxist Lie of White Privilege at the Trump hotel in Washington DC, featuring Jordan Peterson as a speaker. O’Fallon has obsessions about Marxism, about the Holy Mother Church, about George Soros (call that what it is: anti-semitism), about post-modernism, about retaining the privileges of class and race.

Dawkins says he had no idea about any of that. All I can say is…goddamn it, LEARN. As an influential voice in atheism, you’ve got a responsibility to figure it out.

Furthermore, this is a “conference” with just 3 speakers, Boghossian, Lindsay, and Pluckrose, who have a deplorable reputation as bad scholars who make up shit in their crusade against post-modernism, just like Peterson, while not having the vaguest notion of what it is. O’Fallon, who is a Florida man, is flying them off to a “conference” in an arbitrary location, London, which none of them have connections to, and the trio have cheerfully accepted, apparently without looking crosswise at the Catholic conservative who is funding their junket. This is a guy who publishes articles like Hitler the Progressive, which argues that the problem with Nazis was that they abandoned Christian morality, and they’ve just unthinkingly joined his crank crusade.

Can we someday have an atheism that isn’t all tangled with the likes of Dawkins, Boghossian, Lindsay, Pluckrose, and their mob of slimy ignorati? Please?

Do you have an orange shirt? » « I’ll be babbling in St Paul today