The governor of Puerto Rico is one sorry sexist homophobe, and that fact was exposed when the contents of some of his messages was revealed.

In the chats on the encrypted messaging app Telegram, governor Rossello calls one New York female politician of Puerto Rican background a ‘whore,’ describes another as a ‘daughter of a b****’ and makes fun of an obese man he posed with in a photo. The chat also contains vulgar references to Puerto Rican star Ricky Martin’s homosexuality and a series of emojis of a raised middle finger directed at a federal control board overseeing the island’s finances.

What do you think happened then? Puerto Ricans rioted for days! 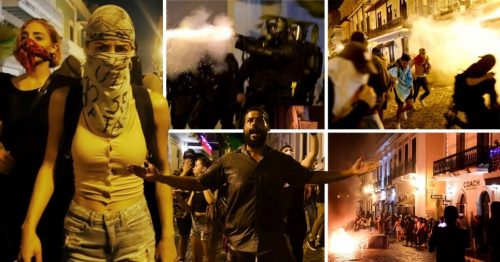 Of course, it wasn’t just that Governor Rossello was a demonstrable ass, it was also the corruption.

‘Chatgate’ erupted only a day after Rossello’s former secretary of education and five other people were arrested on charges of ‘steering federal money to unqualified, politically connected contractors’.

In contrast, here on the mainland USA we have an even worse president, an incompetent cabinet, and widespread corruption. We aren’t tearing up the streets, although we should be. Instead, we’re trying to play by the rules, work out resolutions in a formal, lawyerly way, which ought to be a good thing. I would be quite satisfied if we were making progress towards resolving the problem of the bigoted asshole-in-chief in the White House through such cautious means. But we’re not. The Republicans are a solid bloc who stand behind Trump no matter what he says and does, while the Democrats … oh god, the Democrats are Democrats. They struggled to put together a censure motion in the House against Trump’s racist tweets, which ought to have been a given.

But as with most attempts to show disapproval with the president, Tuesday’s efforts proved to be ham-fisted. House Democrats formally condemned Trump for his social media missive. But the path getting there was complicated by internal disarray, and overshadowed by the absence of an agreed-upon strategy that culminated in a massive blow-up on the House floor, with Speaker Nancy Pelosi accused of violating House rules in her attempts to peg the president as a racist.

It was, in the grand scheme of things, a bureaucratic misstep. But for many Democrats it symbolized something far more: yet another illustration of the party’s ineptitude and, ultimately, its timidity in confronting Trump.

“Trump wins all these fights for the simple reason that he’s not getting impeached,” said Adam Jentleson, former chief of staff to former Senate Majority Leader Harry Reid. “Every half-hearted attempt to hold him accountable just highlights that Democrats are choosing not to use the most powerful accountability tool available to them.”

Jentleson added, “This is an untenable strategy for leaders who promised real accountability.”

We sit here placid and pacified by the delusion that there is an Official Resistance Party that will persevere to make things right, and we don’t have one. We have a nominal opposition party that is dominated by conservative/centrist/moderates that would prefer to do nothing, in hopes that someday they’ll get a majority and then they can take the place of the Republicans. That’s all they aspire to, getting more committee leaderships, more money from lobbyists, more power to maintain the status quo.

Some Democrats see ominous signs in the minefield that faces the party going forward.

“Trump threw us a lifeline and unified us for now,” a senior House Democratic official told The Daily Beast. “But I think what you’re seeing here is what is going to play out national during this election: progressives feeling like they’re always getting pushed aside for the more moderate position and the frustration will continue to boil over.”

“I don’t think our problems are going away anytime soon.”

I see ominous signs in Puerto Rico. If the Democratic leadership can’t pull their heads out of their asses and lead, I see fires in the streets and gunfire in the capitol.

I don’t think I have enough patience to deal with people this far gone » « Pretty, pretty Shae