I was watching this video in which Chrisiousity takes apart a lecture by Gad Saad. Saad, as you may know, is one of those regressive types, an adherent of the cult of evolutionary psychology, who is the darling of all those conservative gentlemen who want to believe that traditional values are the best values, scientifically. He’s not exactly someone I think is worth listening to, but Chrisiousity does a fine job of questioning his claims, so that was worthwhile.

I was struck by one thing, though: Saad puts up an abbreviated version of Dartmouth’s Freedom Budget, a plan for increasing diversity and representation at the university, and seems to think it’s a bad thing. I guess this is a distinct difference between us, because I read it and thought it was excellent and aspirational, and would like to see it implemented everywhere. Saad seems to think it’s obvious that it is an evil plan.

Here’s the opening of the Freedom Budget, which clearly lays out the purpose and goals of the plan.

We, the Concerned Asian, Black, Latin@, Native, Undocumented, Queer, and Differently-Abled students at Dartmouth College, seek to eradicate systems of oppression as they affect marginalized communities on this campus. These systems–which include racism, classism, sexism, heterosexism, and ableism–are deployed at Dartmouth and beyond as forms of institutional violence. We demand that Dartmouth challenge these systems by redistributing power and resources in a way that is radically equitable. We believe that dialogue and resistance are both legitimate and necessary ways of disturbing the status quo and forcing parties to deal with the roots of the issues.

For our resistance, we have chosen to invoke The Rev. Dr. Martin Luther King, Jr. and the Civil Rights Movement because Dartmouth claims to celebrate both the man and the movement with month-long programming. Prior to his death, Dr. King had been working with the larger movement to produce a “Freedom Budget.” This Freedom Budget focused on redistributing power and restoring justice for communities who suffered economic oppression at the hands of rich, white power structures. This budget was not a proposal for better interpersonal interactions, but a proposal to transform oppressive structures. Dartmouth epitomizes power being isolated to rich, white males. As such, there is no better place than this campus to campaign for a Freedom Budget that will address the consequences of white male patriarchy today.

Yes. We need to stop shrugging our shoulders, retreating to the excuse that this is just the way it is, and make changes to enable better representation. Really, you can’t just appease white guilt and say “we wish we had more black faculty”…you have to take the next step and actually hire them.

But, as I said, Saad just put up a sample of the demands. This one. 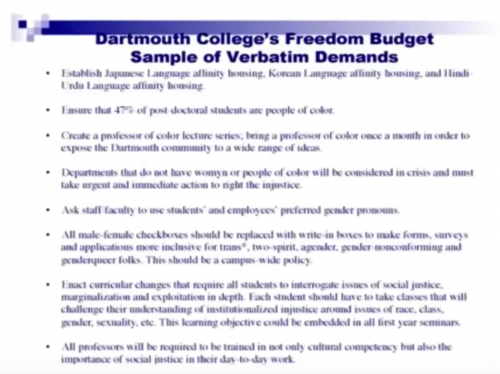 It still looks fine to me.

Saad moans about identity politics here, but this is an issue of practical concern. If you are attracting diverse students with different native languages, help them. Dartmouth apparently already has Chinese and Arabic affinity language housing, this is just asking to do likewise with other cultures. Your services should reflect the student body, and provide support for all of them.

Why does Saad find this controversial?

Ensure that 47% of post-doctoral students are people of color.

Unfortunately, they don’t have a mechanism provided for doing this: post-docs are typically hired by research groups, not directly by the university, so the university does not have much influence here. But the logic is sound: the full document points out that “They should match the student of color population at Dartmouth”, and since post-docs are the next generation of the professoriate, making their population match the undergraduate population offers both better representation now, and will improve representation in the future.

It’s a nice idea. We should be wondering why the students we’re training are not being fairly represented in the next stage of professional development. We should be doing something about it.

Only once a month? This is a trivial request. At large research universities, it’s not uncommon for individual departments to bring in speakers once a week.

Departments that do not have womyn or people of color will be considered in crisis and must take urgent and immediate action to right the injustice.

Saad mindlessly echoes the bias that perpetuates this situation: do we really think we should insist that math and engineering programs that don’t have any women faculty are a problem? YES. There are plenty of women mathematicians and engineers. That there are more men in those fields does not imply an absence of qualified women, and you don’t get to use that as an excuse to amplify the bias. If your department cannot find non-white, non-male candidates for a position, that clearly says there is a crisis…most likely a consequence of implicit bias by current faculty.

Ask staff/faculty to use students’ and employees’ preferred gender pronouns.

This one always provokes indignation from assholes like Saad. He tells an anecdote about a women who suggested that he should ask all the students in his class what pronouns they prefer, and he acted like that was an onerous and ridiculous demand.

It’s not. We routinely ask students to tell us their names, and it’s reasonable to expect us to treat them as individuals and respect who they are. Pronouns aren’t significantly harder (but they are slightly harder, because we often have to overcome years of cultural training, and I sometimes screw up). But if you’re willing to see each student as a unique individual — as you should, as a teacher — this is not too much to ask.

Also, you don’t actually have to go around the room and ask. I’ve found that if I just include the phrase “preferred pronouns: he, him” on my syllabus, students are quite happy to offer their preferences in return.

All male-female checkboxes should be replaced with write-in boxes to make forms, surveys, and applications more inclusive for trans*, two-spirit, agender, gender-noncomforming and genderqueer folks. This should be a campus-wide policy.

Saad construes this as a denial of science, which he avers states that there are only two sexes. This is not true. There are reproductive concerns if we’re trying to breed organisms, but that is totally irrelevant to the classroom, which is a complex sociological construct in itself, with students who have complex and diverse identities which cannot be neatly constrained to two check boxes. Universities should have zero interest in grouping students into breeding pairs. They should have a strong interest in recognizing the unique identities within the student body.

This is also an easy no-brainer. Why insist that all students must conform to one of precisely two patterns? What is your purpose in this?

Enact curricular changes that require all students to interrogate issues of social justice, marginalization and exploitation in depth. Each student should have to take classes that will challenge their understanding of institutionalize injustice around issues of race, class, gender, sexuality, etc. This learning objective should be embedded in all first year seminars.

Saad seems to think this is a demand for indoctrination. It’s the opposite. Notice the language: “interrogate”, “challenge”. This is a statement that a university education should wake people out of complacency and question the status quo. It’s not saying what they should think, but that they should think. I approve of this goal.

At my university, we already have requirements for breadth. Students are expected to take a year of a foreign language, for instance, and I can tell you…we get complaints about that. We require students, even biology majors, to take courses in history and social sciences and literature and all kinds of stuff, and we encourage them to study music and art as well. Universities are not vocational schools where you go to get a certificate in some narrow skill.

As for putting it as a learning objective in all first year seminars, this is also not a big deal. Maybe Saad thinks his classroom is a place for him to pontificate and ramble, but we actually have to put some thought into what we specifically want as outcomes of a course, and we lay out lists of objectives to be met. This is also important for accreditation — the accrediting agencies aren’t going to sit through every lecture in every course. They’re going to ask for evidence that we actually have a well-thought-out curriculum and that we assess our work routinely.

All professors will be required to be trained in not only cultural competency but also the importance of social justice in their day-to-day work.

I understand that some people, like Saad, have a knee-jerk negative response to the words “social justice”, but too bad. If you haven’t thought about the social context of your work, you don’t belong in a university where you have to teach a diverse student body, and not only compel them to memorize a bunch of facts, but learn how the material has context and meaning in their lives.

Of course, Gad Saad is outraged that universities are silencing, he thinks, conservative views, and he goes around lecturing people at other universities about how his kind of voice has been censored. It reminds me of that time David Horowitz spoke at St John’s University, and he ranted and railed about how he was oppressed and not allowed to express his views, and how those social justice types would never allow his opinions to be heard, and in the Q&A, one student raised his hand to mention that his entire class was in attendance — his entire class of women’s studies people studying peaceful strategies for the world.

I will just note that Gad Saad is employed as a university professor and gets far more respect and invitations to speak elsewhere than he deserves, given the deplorable quality of his arguments.

I don’t think we’ll be able to take a nap and wake up at Alpha Centauri » « Ho-hum, Comma again