The photograph is, I think, tastefully provocative. 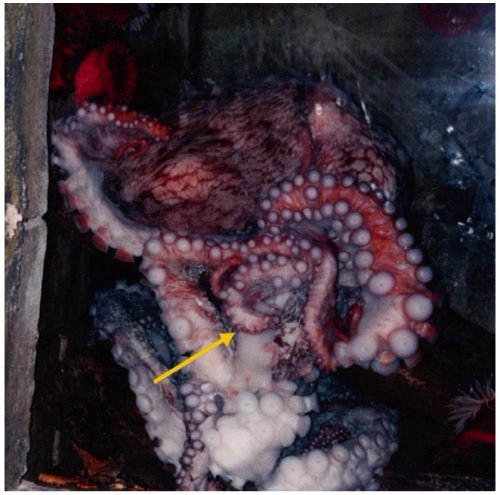 A male and female giant Pacific octopus mating in captivity at the Aquarium of the Bay (San Francisco, California, USA). The male is on top. The arrow points to the insertion of the male’s hectocotylized arm into the mantle cavity of the female. (Photo by Kevin O. Lewand.)

It’s the accompanying text, describing multiple observations of mating, that gets hot and heavy.

A female was placed in a 12,000 l display tank and the male was added 10 min later. The female weighed 18 kg and the male weighed 20 kg. The female was sitting motionless in a lower corner of the tank when the male was added. She was oriented horizontally, facing outward from the corner. As he swam to the bottom, the male inked. He jetted directly to the female and enveloped her with his web and arms. There was then an active intertwining of arms for 2 min. At the end of this period, the female was facing into the corner and the male was on top of her facing the same direction, with his dorsal arms wrapped around her head and mantle. The hectocotylized arm of the male was inserted into the right mantle opening of the female. He was a mottled gray/pink color with frontal and mantle white spots apparent. The mantle was papillose. The female was dull red and smooth. The male’s respiration rate was 5.9 sec/breath, and the volume was judged “deep breathing.”

At 78 min after first contact, there was an increase in the intensity of the mottling and the brightness of the white spots on the mantle of the male as he raised his body up off the female slightly and then settled onto her again, whereupon the intensity of the mottling and white spots dulled. This was likely an arch and pump. At 3 hr 43 min, the male removed the hectocotylized arm. He moved away from the female at 4 hr 1 min. At this point, he was smooth and bright red; she was smooth light pink.

After 17 min apart at the opposite corner of the tank, the male again approached the female. She was in the same corner facing outward. He mounted and grasped her as before and turned mottled and papillose with mantle and frontal white spots apparent. After 3 min, she turned toward the corner as before, so they were facing the same direction. He again held her with his dorsal arms. His hectocotylized arm was inserted into the mantle of the female. They maintained this position for another 4 hr 12 min. He then moved off to an opposite corner of the tank and turned smooth dark red. She maintained a smooth pale pink for several minutes and then turned mottled and papillose. No spermatophores were observed protruding from the female’s mantle cavity as reported by Mann, Martin and Thiebsch, (1970).

Whew. Get back, EL James, there’s a new bestseller in the making. I’m also impressed with the male’s endurance — 3-4 hours? We hoo-mans are not worthy.

Why do I never recognize the universities hated by conservatives? » « What if I don’t want to debate you, G Man?