A graphic designer, Katherine Young, redesigned a girls’ magazine cover to highlight the implicit assumptions we all tend to make about women: 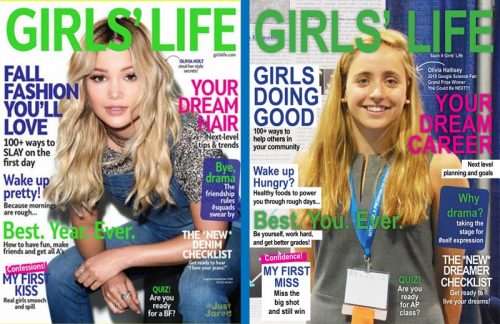 I ran across this on Facebook, where someone posted it approvingly, and I agree — why shouldn’t girls and boys be reinforced for a wide range of abilities? You can be pretty, or you can be smart, or you can be strong, or you can be brave, or you can be sensitive…or you can be all of those things at once, even, although then I’ll hate you for being so much better than me. No! That’s not it! We should give everyone opportunities to be all those things, and others as well, and avoid channeling them down a single acceptable path.

But then someone commented on that post, and it was fascinating. I’m used to criticizing creationist for appallingly bad reasoning abilities and misuse of scientific theories, but here’s a magnificent example of someone babbling pretentiously in favor of some narrow scientific concepts, and applying them as a justification for his gender biases. It’s kind of horrifying. It’s also painfully common.

So this person (all names removed to protect the guilty) asks for a clarification. He doesn’t get one, but that doesn’t matter, he’s on a roll.

it seems to me that you are suggesting that is immoral or at least somehow improper for females to be evaluated using physical characteristics that highlight fertility such as facial symmetry, skin texture, hip to waist ratio, etc. and that instead they should be judged on mental abilities that enable them to have a career. is my understanding of your intent correct?

The implication being that the females should be judged on the basis of their potential fertility, where fertility is the most desired quality, but things like intelligence make no significant contribution to their maternal abilities.

I wonder if he’d make the same demands on boys: we should be evaluating them on symmetry, penis length, sperm count, and combat ability, because those contribute to men’s purpose in life, which is to crush their competitors and impregnate females. I didn’t ask, because I was afraid that he’d say yes, and also think those are good things.

Because of course what he claims to be driving his ideas is an objective position on evolution.

given the great demands placed on the female body during homo sapiens’ lengthy gestation and lactation period, would it be wrong for me to suggest that encouraging males to select mates based on characteristics that enable the female to generate wealth independent of a mate rather than on their ability to bear children may have long term negative effects on the species. or is that just the crazy in me talking?

Oh, man. A couple of problems here: evolution doesn’t care what’s “good” for the species. It’s all about short term responses for individuals and their progeny, and different strategies work for different individuals. One size fits all is not a smart plan for a diverse population.

Humans have complex lives and a difficult maturation process. It also wouldn’t benefit us if females were reduced to a shapely, symmetrical uterus perched atop some wide, sexually attractive hips. Maybe benevolent evolution should be shaping men to be uxorious and devoted stay-at-home fathers so their mates can focus on that beauty thing, for the good of the species?

I should also point out that this idea that we men, from our limited perspective, can actually assess what traits are “good for the species” has an unpleasant history. That’s the basis of eugenics, the idea that we can control the complex genetic interactions involved in our development, physiology, and behavior, and that we can predict what traits will be directly beneficial for future generations. We can’t. That we can’t doesn’t stop people from over-simplifying the problem and pretending that they know exactly what’s best for everyone else.

It’s pointed out to him that he’s making the fallacy of composition. Does he care? Of course not! Because evolution. And because he cares about these girls <shudder>.

that may be true but i would caution throwing the baby out with the bath water and ignoring the evolutionary reasons behind our obsession with beauty, not just because of the long term impact on the species as a whole, but also because of the individual impact on the mental well being of young girls

Again with the “species as a whole” argument! How does he know what’s good for the species as a whole? For example, right now we’re seeing a long term pattern of decline in sperm counts in many human populations. Would he favor artificial selection for fecundity in boys for the “good of the species”?

He also seems to think he knows best what is good for the mental well being of young girls, and that is to focus on beauty and appearance and fashion. Some girls will be happy with that, and of course they can follow that course…but others are not. What are we to do with them, for the good of their mental health? Tell them to shape up and memorize cosmetics brands, so they’ll be happy and well-adjusted? I never faced that specific pressure, but I was told as a kid by my peers and teachers that I, as a boy, was supposed to like sports, and should turn out for baseball and football. I was judged because I wasn’t good at sports (maybe some of you experienced the same phenomenon), and it wasn’t good for my emotional well-being. I liked to read books instead. All I needed in my life was some jerk trying to explain to me that my interests in science were not good for the species, and that they had an evolutionary justification for why I needed to butt heads with the big boys on a grassy field.

But now we get into the religious argument. This is an example of uninformed religious dogmatism.

it seems to me that you always turn the natural order of things upside down! sometimes i am not sure if you are serious or just playing with me :)

not everyone can be smart and win the google science fair. suggesting to young girls that they have to be smart in order to have a meaningful and successful life might not be the best way to go.

And that last line…has he considered that suggesting to young girls that they have to be pretty in order to have a meaningful and successful life might not be the best way to go? Probably not.

when i was young and naive, the vanity of women frustrated me. especially because i was a slob, i could not understand their obssession with adorning themselves with all kinds of paints and bows and ribbons and shiny trinkets, but now that the passions of youth that blind objective contemplation have been reduced a few dimly glowing embers buried in a pile of ashes, i understand there are evolutionary forces behind these obssessions and i can accept them as the natural order of things.

The hypocrisy…he was a slob, but he knows best what women should do. He thinks women as a whole are vain. But now that he has found Jesus evolution, he understands the reason why women should be working so hard to make themselves beautiful — it’s to enhance his ability to reproduce, and theirs, too, because the only way a woman can improve their fitness is with a good hip-to-waist ratio, while he can get away with being a pompous slob.

I am not fooled at all. This is a man using poorly understood sciencey buzzwords to justify his culturally supported biases.

Unburying some Secrets: Peter Godfrey-Smith’s evolution of consciousness » « Why I am a biologist rather than a physicist