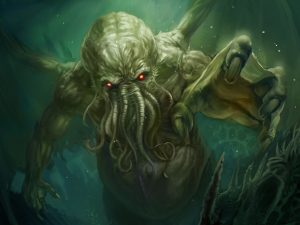 If you ever want to publish some poorly written drivel in a popular “news” magazine, there’s an easy recipe: make sure it’s pious drivel. It’s like these rags have a mandatory quota of religious crap they have to spread around, and quality is no criterion. So Newsweek published an article titled, Does god exist? Some scientists think they have proof. Guess what? They don’t have proof, and it’s not written by a scientist. The author is an economist, or more precisely, working at the intersection of economics, environmentalism and theology. It shows. He has a couple of bad arguments that don’t justify what he claims.

His first argument is basically that math is magic. It’s not matter, and it’s not energy, therefore it’s something independent of physical reality.

In other words, as I argue in my book, it takes the existence of some kind of a god to make the mathematical underpinnings of the universe comprehensible.

Did I mention that he’s peddling a book? Of course he is.

I’m not a mathematician or a philosopher, I’m just a pragmatic biologist, so I find the whole point of this line of reasoning to sail right over my head. It seems more than a little self-referential — god created logic; I’m making a logical argument; therefore god exists — and they want to argue not that god is mathematics, but that god is something outside of mathematics who created math, so it’s not clear how demonstrating that the universe operates on a consistent set of logical principles argues for something outside that universe. That math works does not imply that a god, especially the specific deity of myth and folklore, Jesus, also works.

But it’s typical of this guy’s approach. If he can’t see it or touch it, it must be a mystery, and must be supernatural, therefore god. He has another example, besides the math he doesn’t understand: consciousness.

How can physical atoms and molecules, for example, create something that exists in a separate domain that has no physical existence: human consciousness?

It is a mystery that lies beyond science.

That consciousness exists in a separate “domain” is nothing but an assertion.

The complex, patterned flow of electrons inside the computer he typed that on also lacks “measurable dimensions”, therefore Microsoft Word is supernatural. Probably satanic, even.

…I would argue that the supernatural character of the workings of human consciousness adds grounds for raising the probability of the existence of a supernatural god.

Except…the workings of human consciousness are not supernatural. You can swallow a pill that affects the level of neurotransmitters in your brain, and change your mood. You can have a stroke that knocks out regions of the brain and get changes in personality and behavior. You can lie in an MRI and think about math problems or poetry and see changes in the pattern of oxygen consumption in your brain. It’s complicated and we’re far from understanding everything about consciousness, but it is clear that it is profoundly physical, a product of shifting patterns of ionic flux and material patterns of connectivity and chemistry.

This being a pseudoscientific essay on god, he’s also got to throw in his two cents about evolution. He doesn’t understand it.

As I say in my book, I should emphasize that I am not questioning the reality of natural biological evolution. What is interesting to me, however, are the fierce arguments that have taken place between professional evolutionary biologists. A number of developments in evolutionary theory have challenged traditional Darwinist—and later neo-Darwinist—views that emphasize random genetic mutations and gradual evolutionary selection by the process of survival of the fittest.

Oh? Really? What are these arguments? Of course random genetic mutations are part of the story. Of course selection occurs. There are arguments about the relative contributions of different processes in evolution, but no real challenges to the big picture. Where does he get this idea that there are major shake-ups going on that make the supernatural a plausible alternative theory?

Would you believe…Stephen Jay Gould?

From the 1970s onwards, the Harvard evolutionary biologist Stephen Jay Gould created controversy by positing a different view, “punctuated equilibrium,” to the slow and gradual evolution of species as theorized by Darwin.

No. Punctuated equilibrium is not a different view (although Gould himself contributed to the confusion by inflating the significance of an argument about the tempo of evolution). There is nothing in PE to defy our understanding of how evolution works. What this is is simply more of the standard creationist lack of comprehension of both evolutionary theory and punctuated equilibrium.

I recommend this overview by Douglas Theobald on the misconceptions about PE.

Much confusion has surrounded the concept of Punctuated Equilibrium (PE) as proposed by Niles Eldredge and Stephen Jay Gould in 1972. This essay addresses a few of the erroneous views held by many creationists and even some evolutionary biologists concerning PE. In this article I make the following main points:

Aside from mangling ideas by Gould, who else is claiming that natural mechanisms are inadequate to explain evolution? It’s James Shapiro.

In 2011, the University of Chicago evolutionary biologist James Shapiro argued that, remarkably enough, many micro-evolutionary processes worked as though guided by a purposeful “sentience” of the evolving plant and animal organisms themselves. “The capacity of living organisms to alter their own heredity is undeniable,” he wrote. “Our current ideas about evolution have to incorporate this basic fact of life.”

Shapiro is a crank. The only people who promote his theories all seem to be intelligent design creationists. The Newsweek article seems to believe he’s supporting the god-hypothesis.

For my part, the most recent developments in evolutionary biology have increased the probability of a god.

You know, I’m a little bit familiar with current developments in evolutionary biology, and none of them involve magic or the supernatural. Once again, he’s just making an assertion without evidence, in contradiction to the actual state of affairs, and somehow leaping to the conclusion that evolution is evidence for a god.

Oh, hey, did you know that the existence of science is evidence for gods, too?

The development of the scientific method in the 17th century in Europe and its modern further advances have had at least as great a set of world-transforming consequences. There have been many historical theories, but none capable, I would argue, of explaining as fundamentally transformational a set of events as the rise of the modern world. It was a revolution in human thought, operating outside any explanations grounded in scientific materialism, that drove the process.

That all these astonishing things happened within the conscious workings of human minds, functioning outside physical reality, offers further rational evidence, in my view, for the conclusion that human beings may well be made “in the image of [a] God.”

Again with the claim that human minds function outside physical reality. If that were true, maybe he could make a case, but he hasn’t demonstrated what he claims.

Furthermore, from this broad, diffuse, non-specific set of sloppy arguments for a god who is some generic force behind mathematics and consciousness and evolution, what do you think: will he promote a pantheistic vision of a deity? Maybe he’ll plunk down on the side of one of the Hindu gods. Or maybe it’ll be Anansi or Huitzilopochtli.

Nah, you know it was coming. He thinks this nebulous nonsense is evidence for the god of the Christian holy book. So predictable…

That the Christian essence, as arose out of Judaism, showed such great staying power amidst the extraordinary political, economic, intellectual and other radical changes of the modern age is another reason I offer for thinking that the existence of a god is very probable.

But he even mentions Judaism — which is significantly older than Christianity, and still extant. If endurance is the metric, shouldn’t it win? Hinduism and Zoroastrianism are even older.

I’d also have to argue with the idea that the Christian essence, whatever that is, has been stable. Ever heard of the Reformation? The Thirty Years War? And which Christianity is he talking about: there are thousands of denominations, and all of them would look really weird in contrast to Christianity in the first century, or the tenth century.

Also, I have to point out that the fact that people believe in something is not actually evidence that what they believe is true. People have believed in ghosts for millennia, that does not mean that ghosts exist.

Botanical Wednesday: Enough, Australia, you’re getting carried away » « So that’s why we don’t have evidence of mermaids