I’m reading a few papers on cephalopod evolution, and one helped me pinpoint my happy time.

Coleoid cephalopod molluscs comprise squid, cuttlefish and octopuses, and represent nearly the entire diversity of modern cephalopods. Sophisticated adaptations such as the use of colour for camouflage and communication, jet propulsion and the ink sac highlight the unique nature of the group. Despite these striking adaptations, there are clear parallels in ecology between coleoids and bony fishes. The coleoid fossil record is limited, however, hindering confident analysis of the tempo and pattern of their evolution. Here we use a molecular dataset (180 genes, approx. 36 000 amino acids) of 26 cephalopod species to explore the phylogeny and timing of cephalopod evolution. We show that crown cephalopods diverged in the Silurian–Devonian, while crown coleoids had origins in the latest Palaeozoic. While the deep-sea vampire squid and dumbo octopuses have ancient origins extending to the Early Mesozoic Era, 242 ± 38 Ma, incirrate octopuses and the decabrachian coleoids (10-armed squid) diversified in the Jurassic Period. These divergence estimates highlight the modern diversity of coleoid cephalopods emerging in the Mesozoic Marine Revolution, a period that also witnessed the radiation of most ray-finned fish groups in addition to several other marine vertebrates. This suggests that that the origin of modern cephalopod biodiversity was contingent on ecological competition with marine vertebrates.

There are lots of details, but the summary is this: they’ve used the molecular data to calibrate a tree of cephalopod phylogeny to place the major diversifications of the group in context, and they’ve also looked at degrees of diversity over time. And the answer is summarized in this one diagram: 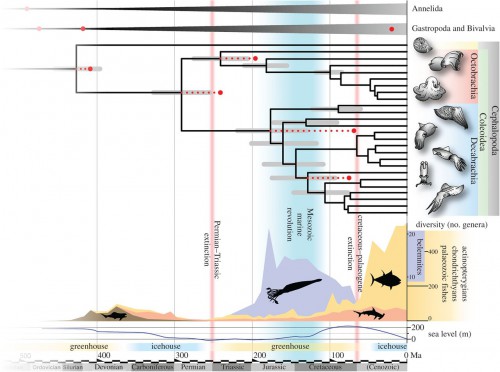 They’ve got a good story behind it, too. What drove the concurrent evolution of both cephalopods and bony fish was a competition to occupy the nektonic space. That is, before the Devonian, animals were primarily benthic — the lowest level of the aquatic environment than includes the floor of the body of water — and that the hot new space to occupy was the nekton, the upper levels of the water. This required new strategies, fish evolved jaws, cephalopods evolved beaks, that opened up new predator/prey relationships. Further, as these groups evolved in the nekton, there was a switch in defensive strategies from making heavy armor to stripping down and becoming more agile. Those trends are conspicuous in both groups.

Taken together, molecular divergence times and the cephalopod fossil record are consistent with a scenario in which predator–prey arms races shaped the coleoid body plan, biodiversity and ecology. The coincidence with the evolution of jawed vertebrates and teleost fishes during the Devonian Nekton Revolution and the Mesozoic Marine Revolution, suggests that nektonic marine vertebrates have been key antagonists towards cephalopods throughout most of their evolution.

So it all started with the Devonian Nekton Revolution, and reached completion in the Mesozoic Marine Revolution, which they call “the final stage in the shift from Palaeozoic ecologies into the modern structure of marine ecosystems”. What you can also see in the diagram is that there has been a shift in the diversity of the phyla occupying that nektonic niche, with cephalopods owning the Mesozoic seas, and teleosts taking over in the Cenezoic.

Which tells me that when I retire, I need to set the dials on my time machine to the late Jurassic/early Cretaceous, and settle down to start fishing/squidding. I was just checking my maps and I see that there was a big inland sea stretching from British Columbia and Calgary, down to most of North Dakota and the western part of South Dakota, so I would only have to move a few hundred miles west.

And 150 million years back.