Yesterday it was Ray Kurzweil. Today it is Steven Pinker. What is it with these people trying to reassure us that the world is getting better for the average person? They’re the real world equivalent of the ‘This is fine’ dog. 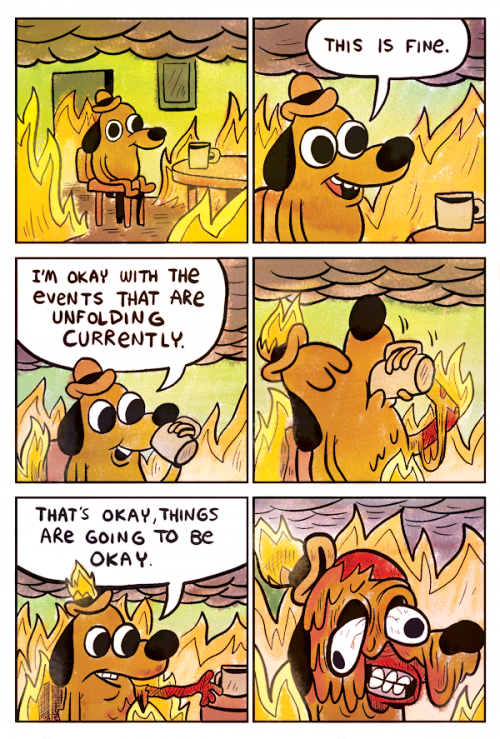 Look, I agree with them: in many ways, the world is gradually getting better for some of us, and slowly, increasingly more people are acquiring greater advantages. I am personally in a pretty comfortable position, and I’m sure life is even better for oblivious buffoons hired by google to mumble deepities, or for Harvard professors. Pinker and Kurzweil even make the same trivial argument that it’s all the fault of the news:

News is a misleading way to understand the world. It’s always about events that happened and not about things that didn’t happen. So when there’s a police officer that has not been shot up or city that has not had a violent demonstration, they don’t make the news. As long as violent events don’t fall to zero, there will be always be headlines to click on. The data show — since the Better Angels of Our Nature was published — rates of violence continue to go down.

So, the solution would be…to start reporting every police officer who is not shot? Balance the bad news with a representative amount of good news? Does anyone wonder why the news reports more crimes than flowers blossoming in the park? I agree with Pinker that news priorities are often a mess — he makes the point that a single mass shooting gets disproportionate attention compared to mass of single shootings, and I’d add that it’s ridiculous that ‘celebrities’ get so much press — but there’s a reason for that. Telling me that Joe is fine is not something I need to worry about, or should do anything about; telling me that Jane has been beaten up tells me there’s a problem, and that something needs to be done. I don’t want loudspeakers and sirens in town constantly announcing “THERE IS NO TORNADO” with a “THERE IS A TORNADO” inserted a couple of times a year.

The purpose of the news is not to give a statistically accurate picture of the world. OK?

A statistically accurate picture of the world is an excuse to hide behind numbers rather than to pay attention to individual lives. There’s a place for careful actuarial assessment and there’s a place for ‘WE NEED TO DO SOMETHING’. You have to keep both positions in perspective, or it leads to misleading assessments like this one.

Belluz: Another thing we often lose sight of is that, in terms of global and local violence, terrorism and war deaths are negligible.

No. No death is negligible.

What his numbers mean is that in an average group of 71,000 people, every year one person is going to be taken aside to be shot, or have a bomb dropped on them, or to step on a landmine, and just generally to die a horrible, violent, bloody death, and we shouldn’t worry about it, because hey look, 70,999 of us are still here! And of course we assume that we will be one of the survivors, because we know that college professors are statistically even less likely to die in wars.

It’s also misleading because the odds are not uniform. I have no anxiety about the insignificant number of college professors getting killed in a war, but I might have very different priorities if I were a citizen trying to survive in Syria or Iraq. It’s extremely easy to sit back in our comfy chairs and cite low numbers in some places, as if that makes the problem go away.

It also ignores the general misery. Being a refugee, or living in poverty, are co-factors in the general statistics of death. That 1.4 per 100,000 is a small number, but it’s much larger if you’re a member of a group that is already enriched in suffering — these deaths are not uniformly distributed, and they’re spread around in a way that is grossly unfair.

The numbers are not sufficient. We need to look at the problems.

Pinker’s solution seems to be to not talk about the problems, which doesn’t seem to me to be a strategy for solutions.

Hey, Professor Pinker! I’m raising my hand! Me! Me! I know the answer!

It’s because they’re anomalous and extreme. They may be more rare than single homicides, but as long as we’re focusing on statistics, look at this: 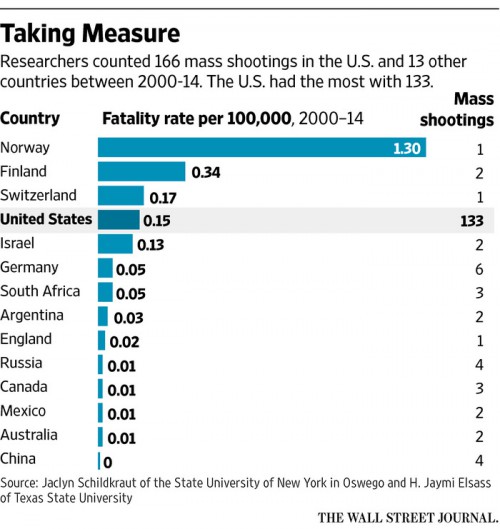 Look at the US numbers. Norway has a higher homicide fatality rate for its population, but we’ve got that weird thing of much higher rates of men grabbing an assault rifle and running amok in a school or shopping mall. Why? Shouldn’t we care about that? Shouldn’t we try to do something about this specific, anomalous problem in our society?

The problem really is not that the news is reporting them. The focus of the problem should be on addressing the cultural sickness that has turned too many American men into gun-fondling assholes who explode into rampages.

Pinker also tries to claim that it’s also the fault of the media, because murdering a lot of people is a way to get your name in the news and become famous. This is also ridiculous. It ignores deeper sociological problems to claim that these are purely vanity killings. You might also ask what there is about our culture that makes the trivial fame of getting your name mentioned a bunch of times on CNN so important to us.

And then there’s … this. Ugh. So much wrong.

There is a concern over the phenomenon of depolicing — of police being less willing to intervene in potentially violent incidents out of a fear they’ll be accused of racism. There’s reason to think that this phenomenon, post-Ferguson, has been one of the contributors to the increase [in violence] from 2014 to 2015. I think it’s not addressed by liberal politicians and if they pretend it doesn’t exist at all, they’ve created an opening for the right to exploit the issue.

Whoa. Those damned liberal politicians. Don’t they realize that the real problem here is that the police are worried about being accused of racism? That the reason that 990 people were shot by police in 2015 or that the reason Philando Castile or Sandra Bland or any of those other human beings were murdered had nothing to do with racism, or trigger-happy militarized cops, but were a consequence of insufficient aggression by the police, who are intimidated by fear of being called a mean name?

You know what I think is going on? That after centuries of oppression and exploitation, after so many years of abuse and violence, economic and physical, that was not reported by the institutional media that simply took it for granted as a universal property of a racist society, rising awareness of inequity is making people question the role of the enforcers. It’s funny how smashing shackles is reported as violence, but placing them on others is law and order.

But jesus fuck, white people: you’re embarrassing me. They “fear they’ll be accused of racism”, and that’s the real problem, rather than fear you’ll be shot at a traffic stop for a broken tail light. 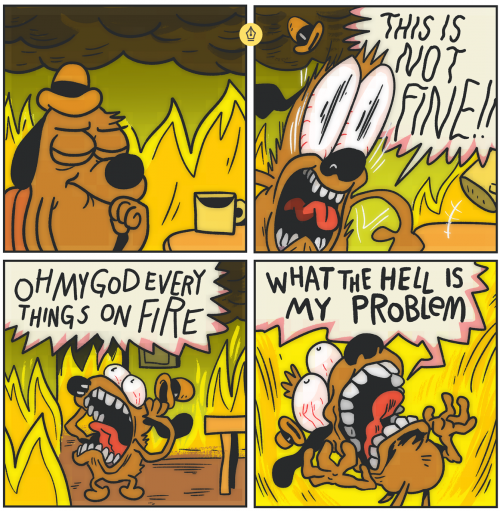 You aren’t still arguing for irreducible complexity, are you? » « Discuss: Interesting Stuff