Dave Futrelle has a tag for MRAs trying to make memes. Maybe I should do something similar, because atheists are also sending me inane, nonsensical memes. Like this one. 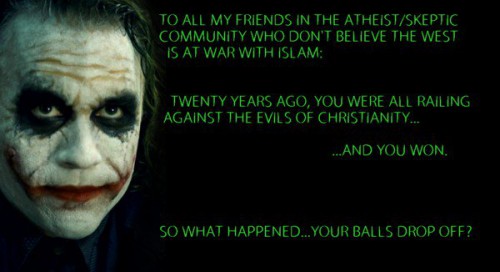 To all my friends in the atheist/skeptic community who do not believe the West is at war with Islam:

Twenty years ago, you were all railing against the evils of Christianity…

So what happened…your balls drop off?

There’s so much wrong with that.

First, that image: why do these people have an affinity for the Joker? He’s a comic book psychopath. He’s a bad guy. Putting your words in the mouth of a murderous madman does not give them added gravitas.

The people sending me this crap are not my friends. Quite the opposite; they’re people who have been harassing me for years, and generally endorse alt-right values that I find repugnant. So right away I’m put off by the dishonesty.

I do not believe the West should be at war with Islam. When will we learn that “war” is an inappropriate and dangerous metaphor for a conflict between ideologies? You do not resolve ideological differences between cultures by shooting people or blowing them up. Islamists are not persuading American and European people that Islam is an enviable philosophy by making terrorist attacks, and we are not winning hearts and minds in the Middle East with drones and bombs and invasions. These acts harden resistance and polarize nations.

Also, it’s an inappropriate division. This is a conflict between secularism and theocracy. Every person in the West is not secular — and especially in America we have a significant element that is in sympathy with Islamic theocrats in action, even if under a different religious label — and not every person in the Islamic world is fanatically religious. It is especially bogus for atheists, who ought to be clearly on the side of secularism, making a blanket alignment with “the West”. It’s more complicated and confusing than that.

I still rail against the evils of Christianity…and the evils of Islam. Both are still around and still going strong. Where is this delusion that we “won” against Christianity coming from? Have you looked at Congress lately?

And of course that last line…did you know that many atheists do not have “balls”? Never had ’em to lose ’em. Yet somehow people like Susan Jacoby, Annie Laurie Gaylor, Margaret Downey, etc., etc., etc. manage to be intelligent, outspoken, and assertively godless without them. It is also ironic that those who espouse the virtues of testicular fortitude also often tend to be the most slavishly devoted to obeying their manly leaders and excusing their every failing.

It’s also interesting that that last line also aligns the obnoxious atheists with the MRAs. Maybe there’s something to the idea of “balls” — they seem to be poisoning a lot of minds.

Writing erotica is a hard way to make a living » « This is a problem I never had, back in the day