The usual suspects are currently howling and thrashing and having temper tantrums over Steve Shives, another white guy who thinks we ought to welcome diversity, but they’re also taking the opportunity to fling accusations of hypocrisy my way. It’s simply amazing how triumphantly they are spamming my email and twitter account with this irrefutable proof that I lied. 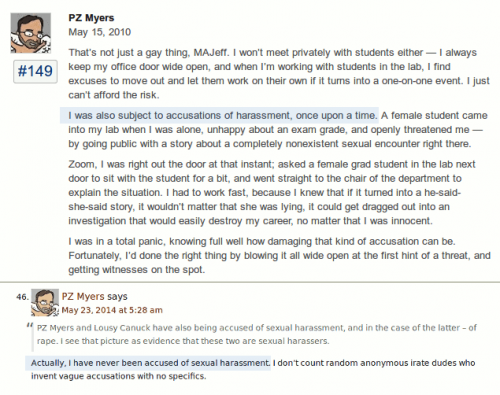 No, I have never been accused of sexual harassment. If you were to have access to my employment record, you’d find it was completely clean — I simply do not harass women (or men, for that matter), and never have. It’s also not that I have been exonerated of charges — I’ve never been charged with harassment, because I’ve never done it (note that this does not imply that being accused means you are guilty), and I’ve scrupulously avoided circumstances where there is even an opportunity for such an accusation.

They love to make much of that incident in the 1990s — in which a young woman thought she could get a better grade by extortion. I responded by immediately removing myself from the situation and making the situation open to investigation by authorities. She did not accuse me because she couldn’t.

So I have been threatened with extortion, but no extortion took place. Similarly, I get weekly murder threats, but I have not been murdered. I am conscious of the distinction, but these wackaloons apparently are not.

By the way, these loons have also sent wild accusations of harassment to my university employers…who have treated their baseless bullshit with the respect they deserve. Those also are not credible accusations.

Guess who is all done grading? » « Solnit sings