In South Carolina, a two-year-old found a gun in his car and shot his grandmother.

Bollinger noted that investigators had already determined that the child was not in a car seat at the time of the shooting, enabling him to reach the .357 that was hanging in a pouch on the back of the passenger seat.

“We’re still trying to figure out how the child pulled the trigger,” he said. “We’re encouraging folks as always, keep your weapons secured, especially around small children.”

I have to ask…why did this person need or want a deadly weapon hanging off of their car seat while they were running routine errands? Did it make them feel more safe than putting their child in a car seat, because that also seems irresponsible and dangerous?

In Tennessee, an 11-year-old got a shotgun and killed another child, because she wouldn’t let him play with her puppy.

His parents had a shotgun and ammo easily available in a closet. Why? Did they think a flock of partridges might suddenly take wing in their living room? What was wrong with that kid that he thought using a shotgun was a reasonable response to having his feelings hurt?

We’re swimming in guns. We have so many guns that children are stumbling over them, and shooting people by accident or intent.

The United States has only 4.5% of the world’s population but has 41.5% of its civilian-owned guns. The U.S. has by far the highest gun ownership rate on Earth — nearly 90 firearms for every 100 people.

And no other developed nation comes close to us in firearms fatalities. We’re at 10-plus per 100,000 people. One third are homicides, two thirds are suicides.

These guns are everywhere. This interactive map gives a different meaning to the red/blue divide. 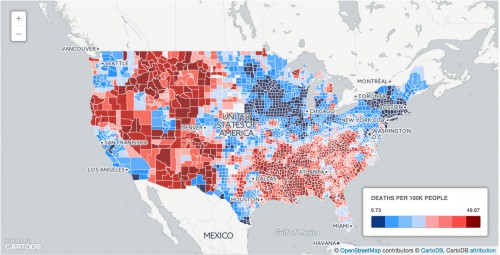 To some degree the split is urban vs. rural. But it is also northern California vs. southern. Northern Utah versus southern. Border counties in Texas had few gun deaths; other parts of the state had a lot.

New England and the Midwest were relatively low on the scale of gun deaths. Vast, vast sections of the South experience very high rates of death by gun. Rural Oregon and other major swaths of the non-urbanized West were disproportionately hit by firearm fatalities.

We’re talking pure unadulterated madness. We don’t need to be awash in guns, they are not making people safer, and coupled to the irrational entitlement of obsessed gun fondlers, they are creating all kinds of new dangerous situations. It’s also getting personal, when a raft of idiots think the solution to campus gun violence is to hand guns to more students.

An emeritus professor, Daniel Hamermesh, has resigned because of the open carry laws on the University of Texas at Austin campus. He’s the smart one.

“With a huge group of students my perception is that the risk that a disgruntled student might bring a gun into the classroom and start shooting at me has been substantially enhanced by the concealed-carry law,” Hamermesh, 72, wrote. He announced his resignation in a letter sent to university president Gregory Fenves on October 4, explaining that he would not be fulfilling his contract to teach fall economics classes through 2017 “out of self-protection.”

“Having a gun in his or her pocket, not with any plan in mind, just as an impulse, to pull it out and shoot at me,” Hamermesh explained to Daily Intelligencer, “that’s the real worry.”

Hamermesh says it’s not uncommon for some students to act irrationally about grades and schoolwork. “I’ve taught some 20,000 students over the years, and I’ve had enough students come to the office complaining, and some of them get pretty riled up.”

Remember, one of the dead in the Umpqua shooting was a professor, Lawrence Levine, and his previous interaction with his killer was to correct him on a vocabulary word. These are not situations where anyone needs to be armed, and having a mob of armed students respond to a threat with a hail of gunfire does not ever improve a situation.

It’s a good thing I don’t own or carry a weapon. I’d be tempted to blast away at the next person who mentioned the second amendment to me, because they’re all fucking morons, and they apparently consider shooting a reasonable reaction. Can we please change that thing? The founding fathers done screwed up big time with that one (and with their timidity and greed in dealing with slavery), and it’s long past time that we recognized their failure and FIXED IT.

It was all China’s fault » « Mary’s Monday Metazoan: Snake embryos have this twisty thing going on