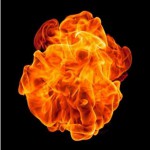 There’s this story going around about why believers are afraid of atheists, and here’s a video that summarizes it.

It annoys me in a couple of different ways, I’m sorry to say.

I don’t disagree that atheists are disliked, but I really doubt that it’s because we make believers afraid — what I’ve most often seen is anger because we’re rejecting their traditions, and annoyance because we’re arrogant (and righteously so, because we’re right!) I suspect we could get a similar reaction — more thoughts of death, worries about personal mortality — if you flashed crucifixes at atheists. Does that mean we’re afraid of Christians because they make us think of death?