Denialists claiming to be pro-science. Politicians insisting on a balanced treatment. A population ignorant of the science indignantly rejecting a clear and well-established, evidence-based conclusion.

I’m not talking about creationism, although it’s exactly the same story. It’s the anti-vax position now.

That dishonest weasel, Chris Christie, is now talking about respecting the choice of anti-vax parents.

Mary Pat and I have had our children vaccinated and we think that it’s an important part of being sure we protect their health and the public health, Christie told reporters here Monday. But the likely Republican presidential candidate added: I also understand that parents need to have some measure of choice in things as well, so that’s the balance that the government has to decide.

Christie, however, said there has to be a balance and it depends on what the vaccine is, what the disease type is, and all the rest. He added, Not every vaccine is created equal and not every disease type is as great a public health threat as others.

This is absurd, almost as absurd as declaring the earth to be 6000 years old. Vaccination is effective; the arbitrators of that effectiveness should be qualified doctors, not ignorant politicians pandering to the stupid vote; and some things are not a matter of opinion, and not subject to the whims of the biggest dumbasses in the population. “Balance” should not be an issue in public health (what, we need to have equal numbers of the sick and dying vs. the healthy and thriving?) just as it isn’t a concern when determining what biological science to teach our kids.

This is what the current measles epidemic, caused by asses who refuse to vaccinate, is doing. 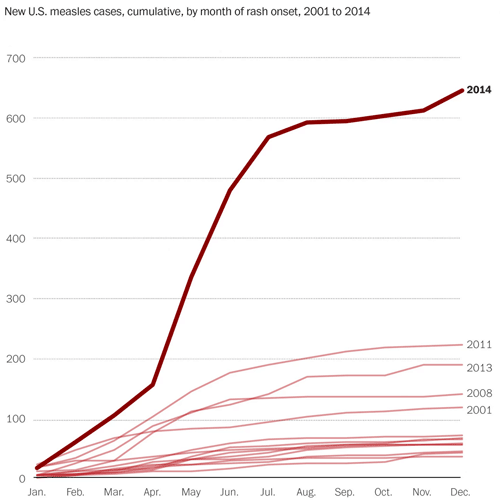 We’re now living in a country where the fostering of New Age nonsense has led to one of our richest states, California, being the leader in child suffering, while Mississippi now has the honor of the nation’s best child vaccination rate — and freedom from measles outbreaks. Measles is not some irritating rite of passage for children, with a few spots and a bit of itching and then it’s all over — kids die of this disease, and often it’s the innocent who are the casualties, not the privileged jerks who don’t want their kids to be afflicted with imaginary side-effects. Read Roald Dahl’s letter about his daughter, who died of the measles. I wouldn’t expose my kids to that kind of risk.

And then there are the irresponsible ‘professionals’ who spread lies about health care. Just as with creationism, it has to be made clear that these aren’t innocent differences of opinion, but that the public is being lied to.

A quick thought on labels » « Jeet Heer and the New Atheism