I’m as surprised as you are. Apparently, the Social Justice Warriors are victorious!

far-left weirdos with nothing going on in their life, who try to inject their toxic, tiresome political ideology into every field imaginable. They’ve taken over Atheism, Science Fiction Books, and they were poised to take over video games until #Gamergate started roundly thrashing them. Now, with what’s being called #Metalgate, we’re finding out that they want to take over heavy metal too. …

I was jazzed to hear that we’ve taken over Atheism and Science Fiction Books, but my enthusiasm was tempered by the subsequent delusional ravings. #GamerGate didn’t thrash anyone but themselves — it was a ghastly episode of autoflagellation. This #MetalGate nonsense is just another invention of the desperate gamergaters.

But actually, we are winning. Here’s an encouraging paper from Hassal and Bushfield, in which they looked at one of the key issues the people on my side of the rift have been pushing for the last few years: getting more diverse representation in conference lineups. The title gives away the answer: Increasing Diversity in Emerging Non-religious Communities. We’ve been succeeding in one of the key platforms (if you want to call it that) of the good side of the rift. 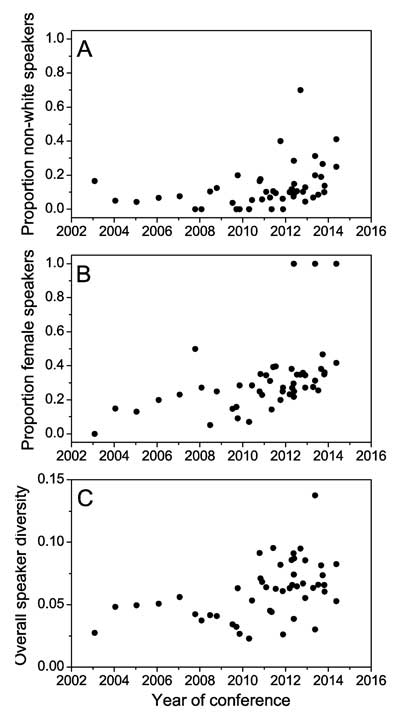 The trends look good, although we’re not quite at the level of perfect parity yet. The authors make some recommendations about how to keep the momentum going.

So what can we learn from the theoretical framework and empirical approach described above? There appear to be a few clear courses of action for those who wish to promote greater diversity based on the central principles of the gatekeeper model and more recent work on the sociological study of academia:

We hope that we have demonstrated the value of diversity monitoring in the atheist community and we encourage the organisers of future conferences or past conferences that have not been included in this paper to contact the corresponding author with conference program details and speaker biographies. Given the relatively close links between organisers of conferences within fields (be it academia or atheism), there should be scope for a consistent recording schema for the on-going evaluation of diversity in invited and presenting speakers at conferences. By way of example, all of the data used in this analysis are available as supplementary data to this paper and we hope that they are of use to organisers in future work towards studying the role of equality in conference participation.

In another bit of evidence that we are triumphant, a reader sent in the harassment policy for the American Geophysical Union Fall Meeting. These standard policies are another thing that makes the wackaloons foam at the mouth, and they really are becoming mainstream…and have been so at professional meetings for a good long while. 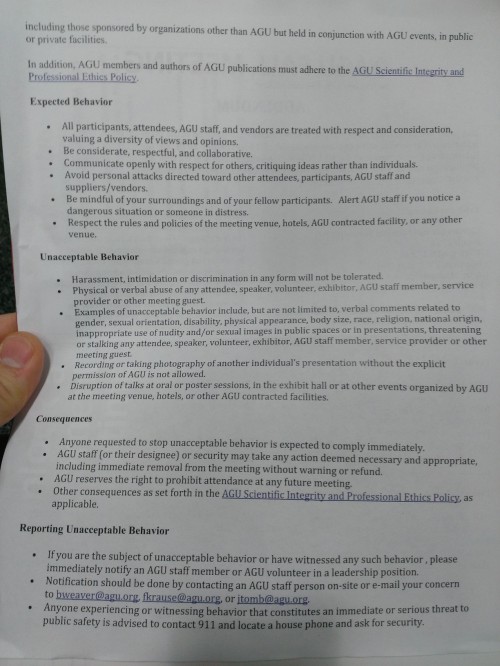 Winning! Hey, maybe we should take on heavy metal music after all…

Sarah got an abortion » « Oh, right. That religion of peace.