Most Minnesota high schools have settled something well: there will be no further discrimination against transgender students in athletics.

Capping months of emotional debate that brought tens of thousands of e-mails, the board overseeing high school athletics in Minnesota overwhelmingly said yes Thursday to opening up girls’ sports to transgender student-athletes.

The decision by the Minnesota State High School League will take effect in the 2015-16 school year, making the state the 33rd to adopt a formal transgender student policy.

The board set out criteria for determining whether transgender students who were born male but identify as female can be eligible for girls’ teams at the nearly 500 schools in the league’s membership. State law already permits girls to compete in boys’ sports.

Except (there’s always an “except”)…

Religious-affiliated private schools will be exempt from complying with the league’s new language.

Of course. Because religion is not a proper source of ethics and morality. Can we stop arguing that it is?

There’s even worse, though. The Star Tribune also ran this ad. 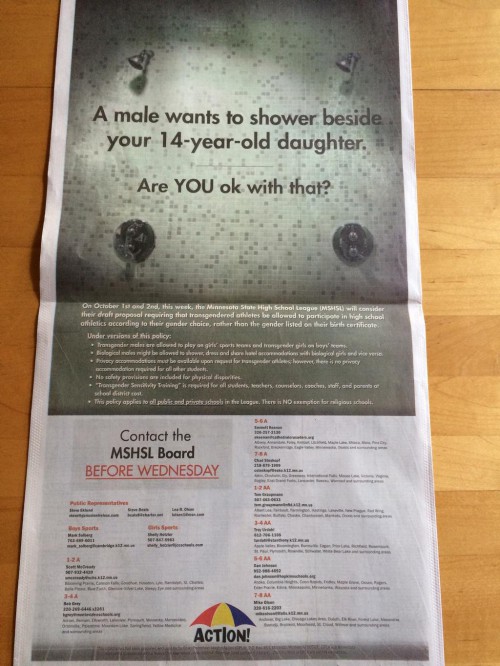 Let’s ask different question. A male wants to shower beside your 14-year-old son. Are YOU ok with that?

It’s all in the innuendo. Make it sound like a threat — “A male” — and obscure reality as much as you can. The most likely fact of the matter is that a shy person with possible gender dysphoria who has been terrifed for most of her time at school is being forced by school policy to take her clothes off in public and shower with a whole bunch of other people. If my past experience as a 14 year old boy is any measure, she’s going to avoid meeting anyone’s eyes and is going to want to get the experience over as quickly as possible.

Also from my past experience, the only people who see the after-gym shower as a predation opportunity were aggressively cis-gendered jocks who would mock all the smaller, younger kids. I don’t see how a transgender girl in the shower is going to be as dangerous as the bullying football player with a wet towel.

And of course the people behind this disgraceful ad, the Minnesota Child Protection League, are a religious bigots and tea party loons.

I just pray that God will be merciful. I do not understand. God is NOT homosexual and he talks about how dangerous this life style is for our eternal souls. (1 Corithians 6:9-11) God created us Man and Women. Does this not express his “good” creation. No civilization has been able to survive this decision. It will be a rapid decline. We turn away from Him even though we know we do not make our own hearts beat, nor our own lungs breathe.

God also seems to have created us gay and straight, cis and trans. If he’s so all-powerful and intrusive that he’s making our hearts beat and our lungs breathe (although as a biologist I’d argue against that), then every time a trans woman takes a breath, she’s being given a gift from your god. Her pulse rebukes you. Who are you to deny her respect?

Not so much a defense of Watson as an indictment of modern biology » « It’s like asking, “if we remove the cancer, what will we replace it with?”