I’ve been vicariously following the #MovingSocialJustice conference this weekend, and feeling that these are really my people. At the same time, though, my nominal people, the ones called atheists, seemed to be remarkably stirred up and have been hitting me with messages of protest: don’t you know that atheism only means you don’t believe in gods? It has zero meaning beyond that. It’s just a straightforward, simple term that has been overloaded by those nasty Social Justice Warriors.

I don’t know what has roused these guardians of the One True Meaning this week — I suspect it’s the latest idiocy from #gamergate — there is some overlap between atheist and gaming communities, and definitely between some atheists and the anti-feminists.

Im just dont agree with the whole trying to make atheism into some kind of belief system.

(Don’t mob him: I think he realized what an awesomely stupid thing he had just written, and deleted it fairly quickly.)

I guess we atheists are just so especially special, that none of our ideas are beliefs, but just simply embodied reality. I have gotten so many emails from atheists insisting that we can’t acknowledge a speck of opinion or mere belief or even emotion, or it means that atheism is exactly the same as a religion. We must insist on complete denial that what atheism is is an interpretation of the nature of the universe.

I think it’s a really good interpretation, and it has the advantage that it’s built on a framework of evidence, and it’s a far better and more thorough explanation than anything religion has ever had to offer, but let’s not pretend that it can be somehow absolute. Jeez, next thing you know, someone will reject the entirety of philosophy, or tell us that science isn’t a philosophy.

And then I found that Michael Luciano had published this remarkable article, decrying the whole notion that atheism could be…something…more than just a flat abstraction.

There’s a weird trend that’s been slinking its way through the social justice community, whereby so-called New Atheists are being denounced for supposedly failing to embrace liberal causes such as diversity and equality.

That’s a lovely sentence. What “weird” trend? Why, the weird ideas of diversity and equality. How freakish! Such absurd, alien ideas would have to “slink” to sneak their way into the company of true rationalists, like atheists. Mr Luciano seems to think this is causing some phony problems.

Apparently, atheism has a “race problem,” or maybe it should be called a “white male problem.” Whichever the case, it appears atheism also has a “shocking woman problem.”

All of these problems must not be real, since they’re only apparent and all get the scare quote treatment.Apparently, we must diminish these so-called problems so that we won’t have to deal with them. This is an astonishing degree of denial, especially since the next thing he does is quote Sikivu Hutchinson, a black woman, talking about the things that white atheists fail to address. Luciano verifies her point by continuing to ignore them, and further asserting that these aren’t real problems that atheists must deal with. Why? Because atheism defines them away.

Did I sleep through some radical redefining of the word ‘atheist’? It’s always been my understanding that an ‘atheist’ is someone who simply lacks belief in deities. That’s it. Somehow, though, it’s suddenly incumbent on atheists to take up certain social and political causes, and that’s just silly.

No, you didn’t! You just conveniently ignore some of the words. Here’s a definition for you: “a person who disbelieves or lacks belief in the existence of God or gods”. There is an important word in there: “person”. Atheists are people. These dictionary atheists are always quick to forget that. People have responsibilities to each other, and further, the rejection of religion and the understanding that the universe, and we human beings, lack any kind of grand purpose, shapes the pattern of those responsibilities. You simply cannot pretend that atheism is meaningless outside one philosophical abstraction.

Well, I suppose you can…but then how can you find any reason to even be an atheist?

There’s also a really low bar set here. Valuing diversity — the idea that atheism should be equally welcoming to all races and sexes — and valuing equality — that everyone in that community should have the same status — are such basic ideas that it’s shocking that anyone could regard their promotion as a sign of a corrupting conspiracy by Social Justice Warriors. Who the fuck would argue with those ideas? Virtually no one. Definitely no one that we would want to accommodate in the atheist movement.

Demanding that part of the responsibility of being an atheist should also mean being a decent human being who wants to build functional, useful communities doesn’t sound like a particularly onerous expectation to me. Of course, what that also means is that atheism needs to broaden its goals and its membership to serve a larger proportion of the population.

That’s also a pragmatic reason to support diversity and equality, even for the Libertarians among us. The issues that many white males care about — such as separation of church and state and science education — becomes an easy no brainer if we’ve got 100 million atheists in the US. But the only way to get to those large numbers is to also recognize that there are other issues that people would like us to work towards. Ignore that and be forever marginalized and frustrated.

The real problem isn’t sneaky liberals in the atheist movement. It’s lazy thinkers who see atheism purely as an entitlement for their social group rather than a responsibility to the whole of humanity.

One other problem: that Luciano article is illustrated with this. 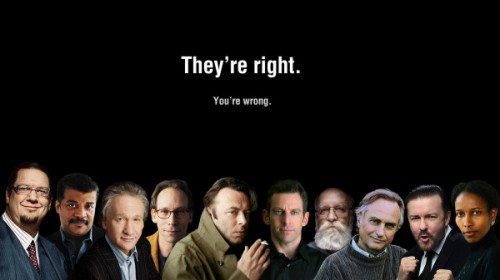 Can we also purge the hero-worshipping authoritarianism from this movement?

Actually, when it involves the Catholic church, it’s never good news » « Your child should not be your proxy victim