Skepchick earlier reported on This vs. That, a poor man’s version of Mythbusters that was actually more like a reanimated version of the thankfully deceased Man Show. The creators have since turned to twitter in a manic campaign to get people to watch their awful show. Take a look at their feed — it’s spam city. I’m surprised it hasn’t been taken down already.

They sent me a couple of tweets offering a discount code and HUGE SAVINGS and urging me to watch their show. I turned them down, rudely, saying they were cheesy sexist shit. They replied.

Hmmm. I find your approach enticing. Who’s in charge of your PR?

I did check out their response. It’s actually a reply to Phil Plait, who said exactly what I said, but much more politely, because he’s Phil Plait.

Thank you for the note. However, I have decided not to watch the show. I watched the trailers, and found them to be off-putting, to say the least. I know they were trying to be tongue-in-cheek, but the sexism in the trailers completelye dissuaded me from wanting to see the show. Also, the use of “booth babes” at Dragon Con (and the tweets promoting them) pretty much sealed the deal for me.

I have written several times about sexism – and sometimes outright misogyny – in the skeptical and scientific communities. I want to promote getting more young girls interested in these topic so they can grow up to be scientists, and not have to deal with institutional and cultural sexism. Given the way you promoted the show (as well as only having men as guests, apparently), I don’t see “This Vs That” as furthering this cause, and in fact would appear to impede it. For that reason, I won’t be promoting it.

That Phil. He’s a pretty good guy. Seeing his email is the only thing of worth in the This Vs. That reaction.

Hotchkiss’s (the creator of the show) response is complaining that he needs to parade around booth babes in skimpy outfits (with two of them wearing lab coats!) because it’s the only way to get his show noticed. He really wants to get more women in science.

But…when he lists his participants and advisors, they are all men. He has an excuse!

@thisvsthatshow: @futilityfiles We invited more than a dozen women scientists to appear on This vs That. ALL of them turned us down!

Yeah? I wonder why. Maybe we can see part of it in his twitter campaign.

@thisvsthatshow: @rickygervais Finally, a TV series that will help you get laid. Promise. http://ow.ly/oFWso

And he denies that he’s a sexist. Right. This is the approach that will get more women in science — tell the men that it will get them laid.

Oooh, not cool. He must have pulled the letter. But hey, I had it open still, and here it is! 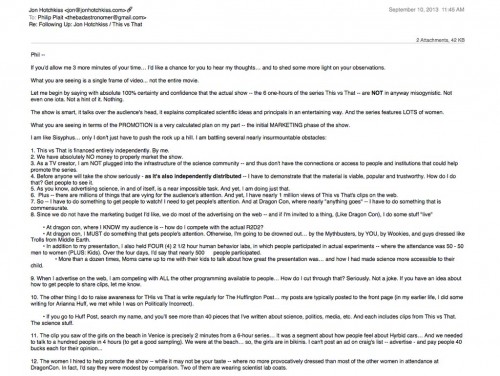 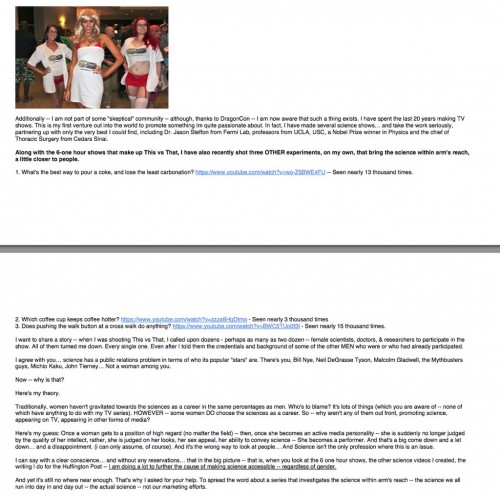 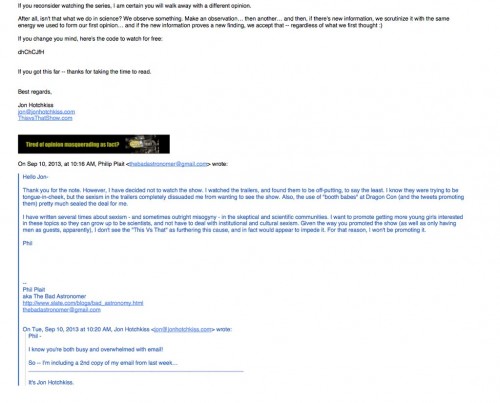 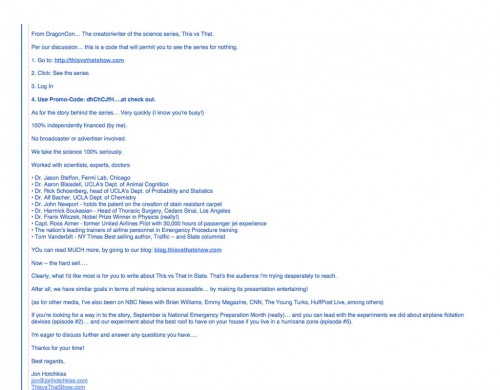