[This is a guest post by Iris Vander Pluym]

The War on Drugs is not a war on drugs, at least not as that phrase is commonly understood in the English language. Assess the misery associated with the drug trade, and you would have to be on drugs yourself to believe the War on Drugs is anything other than a total, abject failure. From measures of public health, addiction rates, narco-terrorism, police corruption, gang violence, vast criminal networks spanning the globe to the inhumane prison-industrial complex here at home, the War on Drugs has made the world a far worse place.

Of course the U.S. government has long known that (a) military strategies do not work and may actually boost profits for drug traffickers, and (b) drug treatment is far cheaper and twenty-three times more effective than supply-side approaches. If the War on Drugs is such a spectacular failure in every respect, why would the feds continue to perpetrate it? The answer is that it is not a failure in every respect: the War on Drugs provides an excellent pretext for violent action by the U.S. and its client states in the Western hemisphere. Not in service to democracy, freedom and human rights, mind you—strictly for the benefit of elite U.S. business interests.

Since 1946, the U.S. Army has been training Latin American government and military officials at its School of the Americas (now WHINSEC) in "counterinsurgency," for the purpose of suppressing leftist movements that might interfere with the unimpeded exploitation of natural resources by U.S.-based conglomerates. We helpfully trained these people in various torture techniques, civilian targeting, extrajudicial executions and extortion. We enthusiastically encouraged terrorism, sabotage, arresting people’s relatives and blackmail. We have engineered violent coups and murders to keep in power cooperative governments. We have deposed, assassinated and otherwise interfered with democratically elected officials and other leaders who exhibit the merest hint of socialism.

In recent decades in Colombia alone, the U.S.-trained army and its allied right-wing paramilitary groups have killed thousands upon thousands of union organizers, peasant and indigenous leaders, human rights workers, land reform activists, religious leaders, leftist politicians and their supporters. Some paramilitary leaders have attempted to ‘cleanse’ Colombian society by murdering drug addicts, alcoholics, prostitutes, petty criminals and the homeless. It’s true that some Colombian presidents have attempted to address the social, political and economic issues that the guerrillas claim are their grievances. But the United States government will not have any of that. With assistance from its allies in the Colombian political, economic and military elite, efforts at meaningful reform have all been thwarted. And so those pesky guerrillas—who have no love for the drug trade—will continue to strike back the only way they can: by blowing up oil pipelines. That is why there is a "War on Drugs" in Colombia.

Sound familiar? It should. The War on Terror works exactly the same way in the Middle East. That is, it doesn’t work, at least not for its stated purposes. No one seriously doubts that our policies create far more terrorists than we could ever capture or kill, or that we have long supported and armed some of the most brutal, tyrannical, anti-democratic and oppressive dictators in the region for the benefit of the world-warming, profit-pumping petroleum industry. Take a look at this nifty interactive map of Yemen , and then try to tell me with a straight face that we’re over there drone bombing Muslims to Keep Us Safe… from terrorists, as opposed to, say, protecting a very cooperative Yemeni regime .

The War on Terror has led to profound changes in American society. The populace has meekly accepted the militarization of domestic police forces, the rise of a vast and insidious surveillance state and the erosion of constitutional rights and civil liberties, all in exchange for empty promises of safety. It’s long been clear that none of it works . Meanwhile, on the home front the War on Drugs has subjected generations of citizens to mass incarceration. More than two million people are behind bars in the U.S.: that is 25 percent of the world’s prisoners. Prison populations have exploded since the 1980s, with the majority of the increase comprising low-level offenders, particularly drug offenders, and disproportionally black and Latino men who are no more likely to dabble in drugs than their white counterparts . What happened after the 1980s? The previous go-to excuse for invading, bombing and otherwise imposing our imperial will on other countries—the Cold War—had just collapsed, but the War on Drugs had already begun. Eventually, Osama bin Laden did America’s Owners a big favor, and the rest, as they say, is history. What could be a more perfect pretext than a "War on Terror"? Let’s invade Iraq for oil! We’ll just say Saddam’s in league with Al-Qaeda or something! The press?! Pfft. They’ll help us do it, bro.

This is not a Republican-Democrat thing. No matter which party is nominally in power, the U.S. government will use every tactic at its disposal keep the American left marginalized as effectively as the Colombians do. Obama saw to it that the Occupy movement was crushed. FBI, NYPD, State Police and other law enforcement agencies have long been infiltrating and monitoring groups opposed to U.S. economic policy, immigration policy, harmful trade agreements, union-busting and racial profiling. The feds are also interested in keeping tabs on anti-death penalty groups, labor organizers, those who support Palestinians or the Israel divestment campaign,and, unsurprisingly, anti-war groups. After all, how are we all going to be duped into the next War on Whatever if we have a formidable peace movement?

All of this is precisely what one would expect from a system of unbridled, imperialist capitalism constrained by neither law nor conscience. The System is the problem.

On Tuesday afternoon, I attended a rally at Union Square. It was the NYC kickoff for an "Abortion Rights Freedom Ride," a cross country caravan organized by StopPatriarchy.org , with rallies planned along the route including places where some of the nation’s most restrictive abortion laws have been passed: Fargo, North Dakota; Wichita, Kansas; and Jackson, Mississippi. Take Mississippi , for example: since 2002 only a single clinic providing abortion services has been in operation. The state’s legislators and governors, who clearly have no other problems to attend to , have been very busy attempting to shut down that last remaining clinic by passing disingenuous laws purporting to protect women’s health. (As if anyone, anywhere, believes conservatives are concerned about anyone’s health. OMGLOL .) Not to be outdone, North Dakota —another state with only one remaining clinic—passed a ban on abortions after six weeks, a point at which many women have no idea they’re pregnant.

I had recently written a piece mentioning StopPatriarchy.org and their refreshingly plain language and savvy messaging: "Abortion on Demand Without Apology." "Women are NOT incubators." "Forced motherhood is female enslavement." When their campaign started to gain attention, the liberal hand-wringing came right on cue . There were concerns, you see. This Abortion Rights Freedom Ride will be "too confrontational, too vociferous and may turn off people to the cause." The activists will be viewed locally as "invading outsiders." Mass political protest only "distracts from important court cases." Besides, it’s better to "rely on officials channels of politics."

Really. How’s that been working out? In the past three years , states have passed nearly 180 restrictions on abortion, and 2013 is already on track to record the second-highest number of abortion restrictions in a single year, ever.

And these concerns sounded familiar. Where had I heard this before? Oh, that’s right: from critics concerned about the Occupy movement, who in turn echoed nearly verbatim critics of Martin Luther King and the Civil Rights movement, and critics of the women’s suffrage movement before that. Quiet down, they said. Wait. Work with The System. Please. When has anything short of confrontational, vociferous, mass political protest ever yielded more than lip service or a few table scraps from The System?

America’s Owners do not care one whit about abortion rights, except insofar as the issue drives conservatives to the polls to elect their Republican servants or outrages liberals enough to elect their Democratic servants . Indeed, they have every reason to keep the War on Women raging.

This is why voting is not enough: the game is rigged. As Chris Hedges put it so succinctly , "There is no way to vote against the interests of Goldman Sachs."Democrats have concern-trolled themselves right into irrelevance. They are The System. The System is the problem. The math is not hard.

I’ll leave you with something promising. There are people who get it. I met some of them at the Abortion Rights Freedom Ride rally. 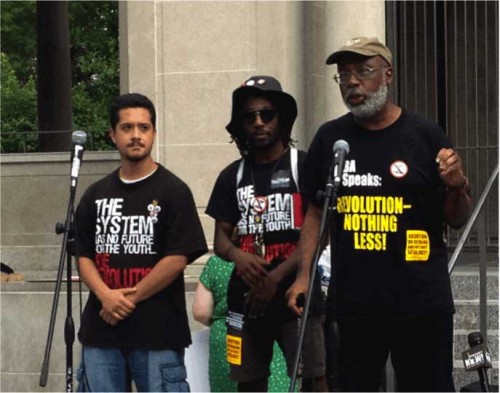 Meet (L-R) Noche Diaz, Jamel Mims, andCarl Dix, members of the Stop Mass Incarceration Network , and defendants in cases brought for nonviolent civil disobedience actions protesting the NYPD’s Stop & Frisk practices. To be honest, when they were first introduced I wondered why three d00ds would be speaking together at an abortion rights rally. It didn’t take long to find out: their explicit message was that if women, who make up half of humanity, are not free, then none of us are free. They spoke powerfully and eloquently about the oppression that they and their communities have faced—and linked it directly to the same source of oppression and exploitation that women, workers and millions of marginalized people face, here and abroad: The System.

The difficult part is predicting what will spark the revolution—and where we will end up after it’s all said and done. To have a shot a desirable outcome, we need more citizens to realize that we, too, are casualties of war.

I’ll see you in the streets.

Iris Vander Pluym is a godless, feminist lefty blogging at perrystreetpalace, a contributing columnist at The Political Junkies for Progressive Democracy, The Feminist Hivemind, Worldwide Hippies/Citizen Journalists Exchange, and an occasional guest poster at Pharyngula, The Greanville Post, and elsewhere. When she is not busy mocking conservatives and other fools, she is an artist and activist living happily in New York City’s West Village.

No gods, no masters…and no revelations, no miracles » « Tackling Pinker’s defense of evolutionary psychology