This letter in the New York Times from 1906 was found by Thomas Lawson. I’d kind of like to see the previous letter that prompted it — it seems that men have been denying sexism for over a century. 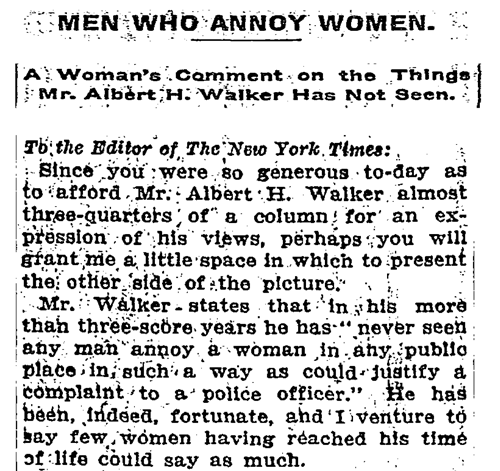 The “Caruso incident” was almost certainly the Monkey House Incident, in which Enrico Caruso was arrested for wandering about in the New York Zoo, fondling women, including one Hannah Graham.

On the one hand, the incident triggered a public discussion about the daily harassment of women in New York. When a man wrote in to the New York Times to say he had never seen any improper treatment of women in public places in New York, numerous women quickly responded with assertions to the contrary. Typical were letters claiming that inappropriate behavior by well-dressed men was far from unusual and praising the police prosecution of the case. According to one letter about harassment on elevated trains, “these detestable practices do not seem to be confined to any particular line of cars nor any one class of men.”

On the other hand, few who were concerned about women’s virtue and security were likely to be comforted by the legal proceedings. For one thing, the charge against Caruso was not personal assault but rather disorderly conduct, which was only a defense of women in an indirect way. For another, part of Caruso’s defense strategy was to impugn Hannah Graham’s character as a virtuous, “respectable” woman, asserting that, whoever the woman was, she had initiated contact with Caruso with a flirtatious glance. Such a strategy only confirmed women’s fears about the hazards of taking legal action against a harasser. Finally and most importantly, Cain’s testimony that he watched Caruso commit four incidents of harassment before he could intervene would have reassured no one. If his was a battle for the protection of women, the results suggest a Pyrrhic victory.

By the way, the case was a complicated mess, tangled by casual anti-Italian bigotry and the reluctance of the victim to step forward and be slimed. Caruso was convicted, fined $10, and went on to popular acclaim at the opera, despite being an ass.

So did Caruso do it? Did he molest the woman who called herself Hannah Graham—or anyone else in the Monkey House that day? As problematic as the case against him was, and as suggestive as the claims of police blackmail, circumstantial evidence suggests that this kind of behavior toward women might not have been out of character for Caruso. A 1903 newspaper profile remarked that Caruso’s first love was garlic, and his second was young American women. A 1905 article noted, “Right here it might be apropos to chronicle that Signor Caruso likes our American oysters.… And the American women!… Same as the oysters. Loves ’em.” Then, a 1906 profile focused on Caruso’s playful penchant for chasing women, which included running around backstage at the Metropolitan Opera. “It is said that you kiss all the beautiful girls that let you!” the reporter said to Caruso. “‘I kiss the homely ones, too,’ he replied, ‘to do penance.’” The lighthearted report concluded, “He runs after Nordica, Fremstad, Marion Weed, at rehearsals, and behind the scenes at plays. He tries to kiss them, but they do not let him.” These accounts probably have as much to do with the emerging emphasis on male opera stars as with Caruso’s behavior, but they do cast the entire incident in a slightly different light.

Catholic hospitals have ethics commissions? » « NRA down in flames