We’ve been having a wolf hunt here in Minnesota this year, and so far about 150 wolves have been killed (by the way, don’t read the comments at that link; our bold brave wolf trappers are accusing critics of being “trannies” who have to squat to pee — it’s amazing how this toxic machismo poisons so many things). But the news in the NY Times is that a famous wolf has been killed. That’s 832F, the alpha female of the Lamar Canyon pack in Yellowstone. 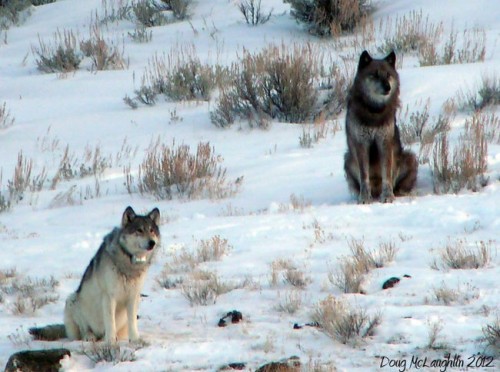 She’s wearing a radio collar. She was a prominent member of a visible pack, and well known to journalists and tourists. Unfortunately, she wandered out of the protected confines of the national park (funny how animals don’t notice artificial boundaries) and was shot. The male in this photo was also shot a few weeks ago. All of these kills were perfectly legal, as are the kills in Minnesota.

It’s disturbing that we should have a desire to restore and maintain the richness of a complex ecosystem, but our solution is to hand ignorant yahoos a license to flex their barbaric masculinity by gunning down key species; a solution that also props up an unsustainable compromise that allows agricultural interests priority over rational land use. We use national resources to subsidize a small number of ranchers — we basically set aside these tracts of land as a national preserve, and instead we bought grazing land for sheep farmers.

You want to profit off the open land? Consider wolf kills of your livestock to be a tax on your privileges.

Well, that’s a novel use for Carl Sagan » « Anti-Caturday post