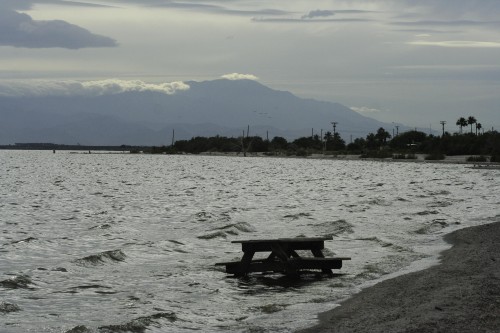 A week ago today a good-sized storm blew into Southern California’s desert off the Sea of Cortez, a.k.a. the Gulf of California. In the Salton Basin (a.k.a. the Salton Trough) north of the Gulf winds averaged 40 mph or so, with gusts above 60. The Salton Sea fills the lowest part of the Salton Basin and the winds churned that water, roiled up its murky, anaerobic depths, and released a cloud of stench, mostly hydrogen sulfide, into the air. People who’ve lived in the Basin are used to that smell, but last weekend the wind off the Sea of Cortez picked up that mixed hydrogen sulfide cocktail and blew it to Los Angeles. On Monday, air quality management districts got complaint calls from residents of Simi Valley, almost 200 miles from the Salton Sea.

It took a day or so before everyone agreed that the Salton Sea was to blame for the stench, and now a few more people are aware of the fact that it’s in trouble. There are plans to “fix” the Sea that would cost several billion dollars, which is getting no traction at all in Sacramento given rabid anti-tax sentiment in California. But “fixing” the Sea in the long term is futile, and the reason involves the Colorado River, plate tectonics, and — possibly — the Grand Canyon.

If it wasn’t for the Colorado River, the Sea of Cortez would extend well into California. Most of the Salton Basin lies below sea level, with only a 30-foot berm near Mexicali between it and the ocean. The Basin is a northern extension of the same rift that holds the Sea of Cortez, created by the north end of the East Pacific Rise as it works to splinter the west side of the North American continent. If it wasn’t for that 30-foot berm you could sail from Mazatlan to Coachella for the Music and Arts Festival, though you might need a snorkel to watch the Tupac hologram.

That berm is there because the Salton Basin/Sea of Cortez rift valley is where the Colorado River happens to reach the sea.

Rivers carry sediment, and desert rivers carry a lot of it, and over the years as the Colorado flowed into the Sea of Cortez rift valley and formed a delta, that delta gradually sealed off the Salton Trough from the open sea. Creating the Colorado Delta took a lot of sediment. As the East Pacific Rise wedges the rift valley wider, the valley floor drops. The Geology 101 term for a valley like this is a “graben,” German for “grave.” California has a few of them, including the valley currently occupied by Lake Tahoe. The floor of the Salton Basin has been sinking almost as fast as the Colorado can fill it up, so the Colorado must have had one hell of a good supply of sediment. More than 10,000 cubic miles of sediment, in fact. At Westmoreland, bedrock lies 18,300 feet below the surface. Even in the extreme north of the Basin the bedrock is usually beneath several thousand feet of sediment. That Tupac hologram stood atop about 13,000 feet of the stuff.

It’s been something like 5 million years since the East Pacific Rise started opening up the Salton Trough area, and if you ask yourself where the Colorado River might have found a lot of sediment in the last 5 million years, there’s an obvious answer that leaps up to suggest itself: 5 million years ago is a common estimate of when the river started cutting the canyons along its length, including that Grand one. That obvious answer is a little too easy: The Grand Canyon itself accounts for only about 1,000 cubic miles of potential sediment, and there’s some thought its carving may have begun significantly before Salton Trough formed. That’s okay. The Colorado’s watershed is about a quarter of a million square miles, so there’s a lot of arid land to provide sediment.

The Salton Sea was formed in 1905 when a would-be agricultural promoter with more enthusiasm than sense dug a canal in some of that sediment from the Colorado River to the Imperial Valley in the Salton Trough. A flood surged over the canal’s headgates and flooded hundreds of square miles of desert. If left to its own devices, the resulting lake would have dried up by the 1950s or so, but almost one and a half million acre-feet a year of agricultural and urban runoff has kept it full. That runoff has been chock-full of nutrients, including ag fertilizer and silt but also including sewage from the New River, a channel between Mexicali and the Sea that until recently was considered the filthiest river in the US, so full of pathogens and industrial chemicals that technicians wore hazmat suits to take water samples. (It’s a bit better now.)

Despite the pollution, the Salton Sea isn’t dirty so much as overfed. The Sea has no outflow other than evaporation, so everything soluble that’s entered it is still there unless it can volatilize and blow away like hydrogen sulfide. The water is so nutrient-rich that massive blooms of algae appear, grow, and die, consuming the dissolved oxygen as they decompose. Sometimes only the top few inches of water have any oxygen at all. Tilapia were planted in the Sea in the 1950s, and on bad days you can watch them gasping at the surface. Then they die, and wash ashore, and botulism sometimes breaks out in seabirds that eat them. This is a big problem, as the Sea is a crucial spot for migrating birds: more than 400 species have been noted there. 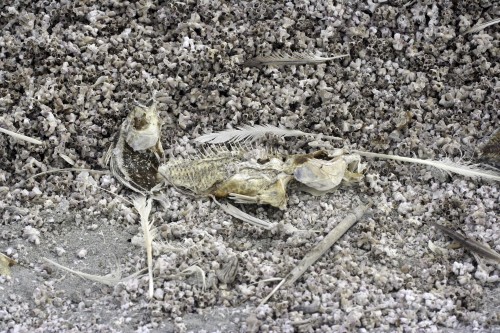 On the shore of the Salton Sea — CC

The Sea has been declining for a while, and in 2017 it’s going to take a nose dive. In 2003 the local Imperial Irrigation District agreed to send a lot of water to San Diego for people to water their lawns with. Sine then, farmers supplied by the IID have been switching to drip irrigation, fallowing their lands, and in general giving up less water to the Sea. Since 2003 the Sea has shrunk by 14 square miles. IID has been putting “mitigation water” into the Sea, but in 2017 that stops. If nothing’s done, the Sea’s fish will probably die out within a year or two. For a few decades after that the Sea will continue shrinking, until it’s a hyperalkaline body of water 29 miles long and 14 feet deep  that periodically belches out clouds of hydrogen sulfide. It will still be biologically productive, but that food chain is going to be short: bacteria, algae, brine shrimp and flies, and a few birds that eat flies.

The state of California is considering plans to preserve some of the Sea’s habitat. The most-discussed scenario involves diking off some marginal sections of the Sea, maintaining open water habitat at either end, and letting the vast middle dry out. This scenario is not uniformly popular with people who live nearby, because giant clouds of alkaline dust in the air can ruin your day, not to mention your lungs. In any event, it will take upwards of $5 billion to carry out that plan, and California isn’t likely to throw that kind of cash at an environmental restoration project anyway.

Doing something to maintain habitat would be a thoughtful interim measure for the birds, but it would essentially be a bandaid on a long process we’re unlikely to control any time soon. The Salton Sea isn’t the first body of water that’s been there. At least three times before, the Colorado has changed course to flow northward into the Salton Basin, filling it up. The PaleoArchaeo folks call these previous, much larger iterations of the Salton Sea Ancient Lake Cahuilla, and I’ve been out in the open desert forty miles from the current Sea and found evidence of pre-contact settlement and fishing camps atop what were once lakeside hills.

And then the Colorado would shift course again, and the old lakes spent a few decades dwindling, growing hypersaline, losing all their habitat and turning into alkaline desert flats.

Those lakes were just a small part of a much larger, dynamic system that encompassed the entire Colorado Delta. When Lake Cahuilla dried up because the flow of the river had shifted, that loss of habitat was mitigated somewhat by the creation of new habitat at the river’s new mouth. What makes the death of the Salton Sea different from the deaths of previous lakes is that we’re not leaving any replacement habitat. The Colorado’s outflow delta is moribund. The river no longer reaches the Gulf except in very wet years. Every single drop of it has been allocated to one use or another. Over the last century we’ve built dozens of dams on the Colorado and its tributaries to regulate the river’s flow. They also function as giant silt traps. The Colorado got its name from the reddish sediment it used to carry: since the dams went up, the Colorado is usually a deep blue-green. The floods and silt that maintained the Delta’s habitat are gone.

The Colorado has taken out much more impressive dams than we could ever build, starting about 3 million years ago when volcanic eruptions blocked the river, creating dams of solid lava as high as 2,000 feet like the one Carl Buell rendered here with a Harrington’s mountain goat. 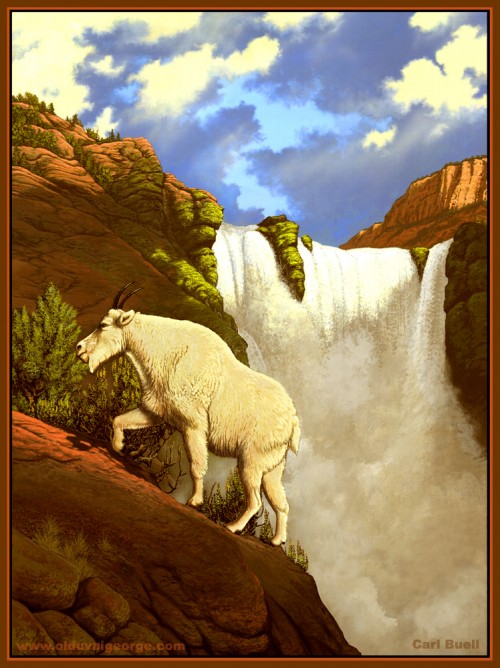 The largest of these dams created lakes that took as long as  3,000 years to fill. They may not have taken very long to empty: there’s evidence that some of these dams failed catastrophically. Imagine a 2,000-foot dam failing all at once, and a 300-foot-high flood racing downriver. We almost had a small replay of that drama in 1983, when Glen Canyon Dam nearly failed during a mere 25-year flood. If it had gone, the flood would almost certainly have overtopped Hoover Dam, possibly taking it out too, and the combined floodwaters of Lakes Powell and Mead would have barreled down on the dams in the Lower Colorado. It didn’t happen, due to some plywood sheets the Bureau of Reclamation nailed up atop the Glen Canyon Dam, but eventually it almost certainly will — and the sediment will flow again. Nature bats last.

The trick is to keep the Delta’s wildlife alive in the meantime, whether on the Salton Sea or somewhere else nearby. It’s not even close to certain that we’ll succeed.

[Lounge #368] » « Arrest everyone who disagrees with me! Show trials for all!