And they know it. Ken Ham has started a new billboard campaign for the creation “museum”, with a variety of different designs, all featuring prehistoric* creatures as draws to get kids and family to attend. Here are some examples: 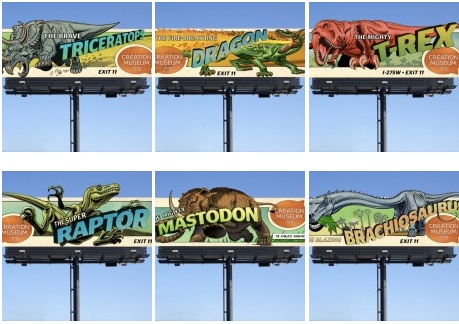 Notice what’s smart about them? They’re focused, featuring an element that they clearly know is a key draw, dinosaurs; they’re eye-catching; they’re professionally designed and have thematic unity; and the Creation “Museum” knows that good marketing is a way to get people to come in to their propaganda mill. You know they invested a good chunk of money in this effort.

So now Ken Ham is openly gloating about his wonderful billboards.

…just like everything else we do at the Creation Museum, they are done professionally—first class!

To make matters even worse, he goes on sneer at the feeble efforts of real museums, and to mock several atheist billboard campaigns, posting examples of some of the worst. And the sad thing is — and you won’t hear me saying this very often — Ken Ham is right. Real museums are strapped for cash, and most of their money is going into curating scientific collections and paying scientists to do work for them, while atheist organizations are actually small time compared to the multi-million dollar operating budget of a commercial enterprise like the Creation “Museum”.

Ham doesn’t have a clue about any of the things real museums do. When an NCSE spokesperson says he wishes more science museums could engage in this kind of promotion, Ham whimpers defensively.

You mean our government-funded (using our tax money) Smithsonian would not have a marketing budget as big as the marketing budget of the Creation Museum? And what about all the other secular museums (no doubt most are funded by our tax dollars) such as the Chicago Field Museum and New York Natural History Museum—and the many, many others!

The Smithsonian, the AMNH, and the Field Museum are not about marketing! They’re institutions doing science. Ham is confused in thinking that his freak show exhibit and monument to bunkum is anything like those places. He does not have a museum, he owns a sideshow attraction!

The article reveals Ken Ham’s ignorance in so many ways. He really doesn’t understand the difference, and he doesn’t comprehend why scientists might be worried about his campaign.

As of writing this blog post, an Associated Press article about our new dinosaur billboards has appeared on many news sites, including ABC News and the Washington Post. The AP article and many blogs indicate that secularists are concerned about them. Isn’t it amazing that they are so worried about one Creation Museum. Think of all the hundreds of secular museums and thousands of secular schools, colleges, and universities where evolution and millions of years are taught as fact—and the secularists are really worried AiG’s Creation Museum! That shows how insecure they really are. Secularists just can’t stand it when information they have censored from the public is being disseminated by us. And they don’t want people thinking for themselves; they want them to swallow their anti-God religion!

Those billboards and his “museum” are not disseminating censored information. Information about creationism is freely available all over, and gets routinely spread in a common American institution, church. We are worried because Ken Ham is spending buckets of money disseminating slickly-produced lies, while scientists are trying to do science. Lies are cheap and easy; the truth is harder to come by. That he follows the cheap and easy route means he has more money to sink into public relations.

And really, it’s easy to see what a lying fraud he is. Did you notice one of the billboards in that montage above?

*Well, actually, if Ken Ham were right, these are historic creatures that lived within the last 6,000 years.