Y’all remember Pastor Tom, right? Weird cranky Christian who got himself banned some time ago, ran a blog that he called “Hard Truth” in which he recited conservative dogma and called himself brave for doing it? He’s back. He’s started up his blog again, and guess what? I partly inspired him!

I wondered over to Pharyngula, where our old pal PZ Myers writes. I looked at a couple things, who he was picking on now, if my name was still in his “dungeon”(it is), and what his traffic was llike. (He has a “sitemeter” link at the bottom of his page) And I was shocked at what I found. 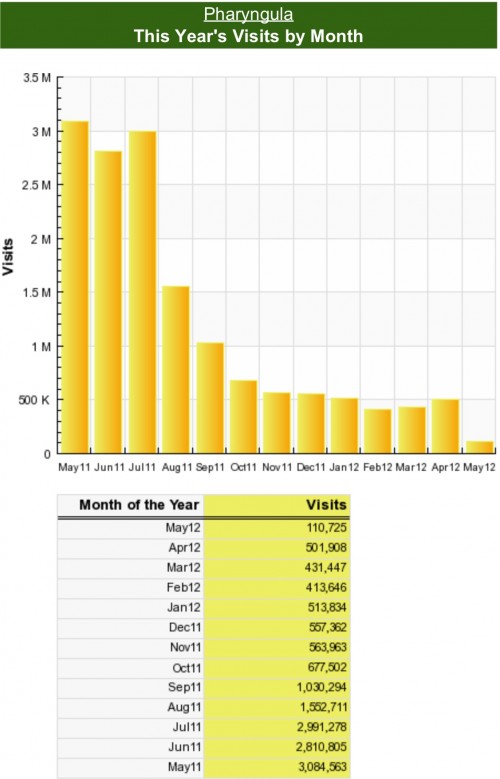 Yes, you are seeing this correct. Pharyngula’s traffic is way, way down. I must point out that I have absolutely no idea what has caused this. But none the less, it was very motivating to see the great Pharyngula down by around eighty-four percent.

This encouraged me because it showed me that changes in this world, however small, however insignificant (which, let us be very clear, the fact that PZ’s traffic is plummeting is very insignificant) can happen, and that Christians have to remain on offense. This is why I’m back doing this. This is why I hope that I can be the best pastor, husband, soul-winner, father, etc. that I can be. Because I know it makes a difference because I know God is still on the throne. Please don’t misunderstand me, seeing a meaningless atheist blog down in traffic is not why I’ve come back to blogging, it was just something that encouraged me along the way to making this decision.

It’s true. You know, that move we made last August? The traffic at Scienceblogs is way, way down, because I’ve moved most of my efforts here, to Freethoughtblogs. The site at Sb only gets partial content, everybody knows it, and so almost everyone comes here now, where traffic is way way up. He has absolutely no way of knowing what has caused this, except maybe for the big bold banner at the top of every page that says:

More articles by PZ Myers can be found on Freethoughtblogs at the new Pharyngula!

You know, the banner with three links to the new network so that no one would miss it. Except Pastor Tom.

Poor Pastor Tom, I have some HARD TRUTH for you: you’re dumb as a bag of slugs.

Before crying triumph at the decline of the heathen, he ought to take a look at Freethoughtblogs. We’re his worst nightmare.