What do you know? Richard Dawkins and I have something in common.

In a particularly slimy move, the Telegraph has posted an article that tries to tar Dawkins with the sin of slavery. Not that Richard Dawkins himself has slaves or endorses slavery, but that he had an 18th century ancestor who had a Jamaican estate with over a thousand slaves. The reporter also made the ludicrous suggestion that slave-holding was genetic.

I’d scarcely had time to re-open my lecture notes when he rang back: “Darwinian natural selection has a lot to do with genes, do you agree?” Of course I agreed. “Well, some people might suggest that you could have inherited a gene for supporting slavery from Henry Dawkins.”

So now there’s a slavery gene? That is quite possibly the dumbest assertion I’ve heard in a whole week…and I read creationist websites. As Dawkins points out, he had 512 direct ancestors in that same generation, and that he has a number of ministers in his lineage. Not only is it ridiculous to invent a slavery gene, but it’s a selective absurdity to cherry-pick members of a large population of remote relatives and claim that an individual is responsible for everything every ancestor did. That’s a rather biblical position to take, I think.

So what do we have in common? I poked around a bit in the genealogical records and found this: a piece of the 1820 US census. 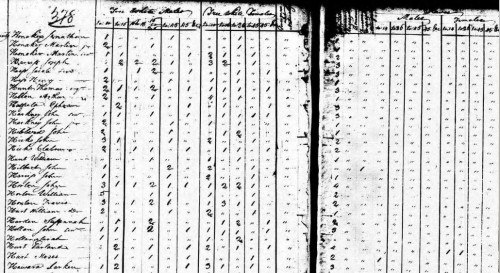 It’s not easy to read, but that’s a bit of the records for St Stevens Parish, King William, Virginia. I’ve mentioned before that I’m Scandinavian on my mother’s side, but on my father’s side, I’m English/Irish/Scots and an undefined mingling of who-knows-what, including a bit of Dutch, and they’ve been skulking around North America since somewhere in the 17th or 18th century, and some of them were even Southerners. My great-great-great-great-grandfather, Garland Hurt (1764-1839) was a Virginian married to Martisha Thurston (1768-1818), who had 3 sons and 3 daughters…and also 1 female slave under 14, and 1 female slave between 14 and 25.

Oh no! Do I carry the slave-master gene?

I suppose if I were interested and extremely ambitious (sorry, I’m not), I could trace all of Garland Hurt’s descendants forward, and then we’d find not only that some of you readers might be related to me. I suspect that some of the people who utterly despise me (if they even know of me) are distant cousins. We’re different from each other and from our ancestors.

My family is a bit down-class compared to those fancy-pants Dawkinses, but as you can see, it’s easy to find slave-owners for any of us among the swarms of ancestors we all have, just by going back far enough. I also have at least one ancestor who fought on the Union side (an Iowan who fought with Grant in the Mississippi campaign) in the Civil War. I deplore the slave-owner, but I don’t own his guilt, nor do I get to take credit for the great-great-grandfather who was mustered out in New Orleans. We’re all a great gemisch of subsets of genes from a bounded population. It’s simply silly to start parsing out characteristics from individuals in a complex cloud from the ancestral gene pool and arbitrarily assigning them to single contemporaries. The writer of that article, Adam Lusher, is an idiot…and the Telegraph ought to be embarrassed at publishing such tripe.

That didn’t work: Samsung sucks » « Episode CCCIV: All about Randi