Here is a page of WWII propaganda, from all sides. It’s weird to see it now with the distance of history making it more remote — it’s easy to judge it now fairly impartially. I have to say, from this sample, that Americans were rather crude and blunt; the Europeans in general had better design sense. And the Italians…whoa, fabulous! On the artistic merits of their propaganda posters, the Italians should definitely have won the war.

Here, for instance, is how the Italian fascists viewed American soldiers: 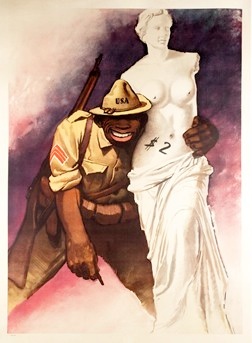 I’ve seen how US cartoonists caricatured the Germans and Japanese (short answer: full-on racist slander), but it’s eye-opening to see how the same was done to us.

What’s the matter with the United States? » « Why I am an atheist – Ellen Rees