That’s what he titles his latest youtube video, anyway. I laughed, just like I laughed when Eric Hovind called to complain about the misinformation on my website. He also claims I “accept defeat”

Myers changes his stance from Ireland, In Ireland Myers says the ‘Quran is Wrong’. After reviewing the iERA Research Paper he now believes its the Quran has ‘ very little opportunity for disproof, and they can be made to fit just about any reasonable observation.’

I am surprised to learn that I accepted defeat. Doesn’t he know I’m indomitable? Anyway, here’s the video where Tzortzis crushes me.

I will give him credit — he does link to my article debunking Islamic embryology, which is more than most creationists would do. But still, he’s got it all wrong.

During our encounter in Ireland, I pointed out that their specific claim of a discrete sequence of development in the embryo, from bones to muscles being added to bones, was false. In the article I wrote on Tzortzis’s strained exegesis of two verses from the Quran, I explained that you can’t make concrete claims about embryology from such a vague, cursory, and intentionally poetic source, such as those two verses. These are not incompatible arguments. The second point is not a softening of the views made in the first point.

If anything, Tzortzis has backed down. In Ireland, he and his friends were trying desperately to argue that Mohammed knew things that no man in his position could possibly have known without a divine source of information; my argument was that no, what’s in the Quran is very much in line with the knowledge of his day, derived from Aristotle and Galen. No miracles were required to write those two verses.

Now Tzortzis’s claim is greatly reduced; it is that the Quran does not “negate reality”, or does not make claims that contradict known science. That’s fine; as I said, it’s the most minuscule of verses saying the wobbliest things, and it’s derived from observations of embryos made by Greek and Roman predecessors, so it’s not surprising that it can be retrofitted to fit modern science by playing enough word games.

Tzortzis relies on what he calls “lexical analysis”, but it’s little more than compiling the equivalent of thesaurus entries for words in the verses, and then picking and choosing the ones that fit the point he’s trying to make. That’s not analysis, it’s cherry-picking.

Amusingly, he does the same thing to modern developmental biology. He’s gone rifling through legitimate embryology texts, trying to prove that I don’t know what I’m talking about, and he found one sentence in a textbook — “after the cartilaginous models of the bone have been established, the myogenic cells, which have now become myoblasts, aggregate to form the muscle masses” — that he thinks shows I was wrong and that his interpretation of the Quran phrase — “bones were clothed with flesh” — is correct.

Wrong. See, this is the problem with his “lexical analysis” approach — it means he tries to conform what he reads to what he already thinks he knows. I know what a developing limb looks like; mesodermal masses condense gradually into organized clusters of cells that differentiate in parallel. Centers of what will become bones aggregate and form cartilage (not bone, notice) as centers of what will become muscle (the myogenic cells in that description) aggregate and begin differentiation into myoblasts and myotubes and eventually muscle fibers.

Here’s what we actually see in the developing limb: branching patterns of cell fate decisions by tissue precursors, and parallel differentiation of the cellular components of those tissues. 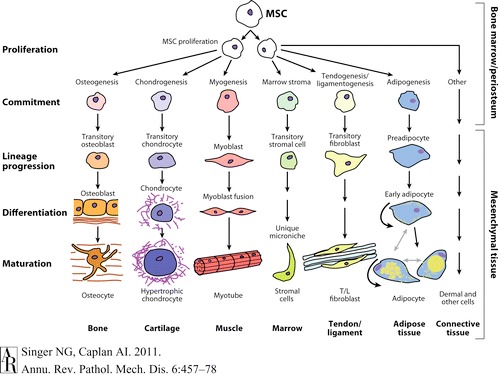 The simplistic and discrete idea of “bones, then flesh” doesn’t even recognize that “bones” and “flesh” aren’t simple binaries, and the sequence isn’t a simple temporal switch. What you had instead was the early segregation of cells into differing mucopolysaccharide matrices, within which cells began complex sequences of shifting patterns of gene expression and differentiation into mesodermally-derived tissues.

Or more poetically, bones and flesh congealed together out of balls of snot. There are sequences within that pattern, but chondrocytes aren’t bones and myoblasts are not muscles. Tzortzis is trying too hard to fit the Quran to science, because he can’t appreciate that it’s just a book written by men trying to make sense of the world, and also unfortunately trying to add extra weight to their opinions by claiming the authority of a god behind them. A sad state of affairs that I’m afraid their modern descendants continue to perpetrate.

So he didn’t like the book then? » « Botanical Wednesday: Christmas Cactus time!