If you tuned in to that local debate on Christian radio, you know that one of the points the Christian fool trotted out was the tired old claim that the Nazis were no true Christians — no True Christian™ would ever commit such horrible acts. It’s an annoyingly feeble and unsupportable argument, but it has a lot of life in it, unfortunately.

This same argument has come up in Faye Flam’s Evolution column for the Philly Inquirer, and has gone on through several articles thanks to that hack from the Discovery Institute, Richard Weikart. It started with an article titled “Severing the link between Darwin and Nazism“, which cited real scholars like Robert Richards and Daniel Gasman to ably refute Weikart’s ridiculous claim that Nazism was inspired by Darwin. The Nazis banned Darwin’s books and rejected the idea that Aryans could have evolved from the lower orders. Weikart’s reply: But Hitler used the word Entwicklung, which translates as “evolution”. It also translates as “development” — Hitler did not use the language as representative of evolution at all.

So Flam got a contribution from a developmental biologist, the most excellent Scott Gilbert, who pointed out that biology and Darwinism were not factors in Hitler’s rise to power: the Lutheran and Catholic churches were. She also gets Keith Thomson, a biologist and museum director, to explain that Darwin did not and would not have approved in any way the Nazi philosophy. Weikart’s reply: but Darwin was a racist! Of course he was — he was a fairly conventional Victorian gentleman who thought the English were the greatest people on the planet. But these biases were not significant factors in his theory, and he struggled to overcome them.

Nazism was not science-based. It was pseudo-scientific religious dogma, tightly tied to the German culture of the time, which was almost entirely Catholic and Lutheran. All you have to do is look at Hitler’s own words to see that, even if he were personally a closet Satanist (I don’t think he was; he was an idiosyncratic Catholic), he tapped into the faith of the German people to achieve his ends. You cannot blame the horrors of the Third Reich on Darwin, who had negligible influence on the great masses of the German Volk, no political pull, and no appeal to the media. If you wanted a lever to shift public opinion on anything in the 1930s, religion was where you applied your force.

I have to give an early plug for my colleague, Michael Lackey (also on the CFI speakers’ bureau, by the way), who will be coming out with a book this Spring on exactly this topic.

His new book project (Modernist God States: A Literary Study of the Theological Origins of Nazi Totalitarianism) is on Hitler and the Nazis. In this book, he opposes one of the dominant interpretations of intellectual and political history, which holds that the West, since the Enlightenment, has been becoming increasingly more secular. Scholars who have adopted this approach claim that Hitler and the Nazis are the logical product of secularization, atheism, and humanism. By stark contrast, Lackey has been trying to demonstrate that secularization has only taken hold in very elite circles, mainly among academics, scholars, and intellectuals. As for the general population, it has actually become increasingly more religious, but in ways that are significantly different from pre-Enlightenment versions of religion. Based on his findings, Lackey argues that the only way to understand Hitler and the Nazis is to take into account the new conceptions of religious subjectivity that started to flourish and dominate among the general population in the early part of the twentieth century. Understanding these new conceptions sheds new and considerable light on Hitler’s and the Nazis’ religious conception of the political.

Among the things he has done is to examine thoroughly the popular literature of Germany in the 1930s and 40s. Surprise, surprise, it isn’t singing paeans to Darwin and Science — these are eminently Christian Nazis.

The cover of his book says it all. I think it’s going to be a significant source for squelching these bizarre, ahistorical notions coming out of the Discovery Institute that somehow Nazi Germany was the apotheosis of the godless Darwinian state. 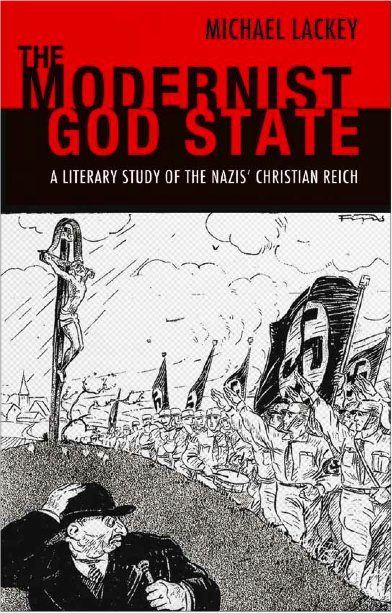 Students! » « It ought to be up to Americans to decide what is true!