I have had visitors from out of town this past week, and have been unable to find blogging time. I have a post sketched out for today, but it’s not written yet. My apologies to those of you who were hoping to read a new Monday Thought Piece today – it will go up, I’m just not sure when. Your patience is appreciated.

Hmm, my bad. I missed today’s post. In my defense, I spent the entire day at museums or on brewery tours. More on that hopefully next week.

Here’s a great story of a Christian missionary who was deconverted by his experience ministering to a non-literate, non-believing tribe. It’s amazing what can happen when you strip away the assumed veneer of respect that religious beliefs have – try explaining what you believe to someone who’s never heard of gods before. You’ll be laughed out of town.

Apologies again for the late posts this week. I did try to warn you.

Hey everyone, just want to give you a heads up that I am on the road this week and next week, so blogging may be  a bit spotty. I will do my best, but this is a work trip which means that I will be dividing my time between work things and trying to get in as much tourism as possible. Blogging will therefore take a bit of a back seat, but my material buffer is overflowing so the only thing between you and your regular dose of Crommunism is me finding the time/inclination to sit down and blurt some stuff out.

First off I want to thank those of you that make this blog part of your day. I know (anecdotally) that people read my not-quite-random thoughts as part of their routine, and that some of these posts strike a chord. I’ve even had some of you e-mail me and solicit my opinion on topics related to the blog. All of this makes me feel really good, and I would like to express my appreciation for all of that.

If, hypothetically speaking, you particularly enjoy a post of mine, or something changes your mind about a topic, or I hit a turn of phrase that you like, won’t you consider sharing it with your friends? There are ‘share’ buttons along the bottom of each post – getting a little love from these sites can go a long way toward building traffic. Those of you on my Facebook – there’s a ‘Share’ button right next to the ‘like’ button I see some of you use. It’s just a little click away, and you could be spreading some of these ideas to other people. Just as you may not have been aware of these topics – race skepticism, atheism, free speech issues – those people close to you may be similarly uninitiated.

I realize it’s a bit uncouth to ask you to work for me, but I’m hoping that my efforts in providing (what I hope is) high-quality material 5 days a week will be some reimbursement. 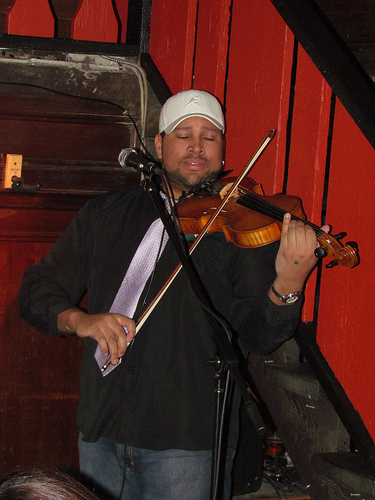 …is brought to you by Tim Wise:

Partying is what we do when we kill people, when we beat someone, when we grind them to dust. It is not what we do when we save lives or end suffering. Saving lives or doing humanitarianism is like making love, while killing people is tantamount to a good, hard, and largely one-sided fuck; and unfortunately we know which of these two things men, in particular, are more apt to prefer. [bolded emphasis mine]

Ayup. And while I’m not too sad that  the United States (look at me buying into the jingoism… weird) engaged in this intercontinental fuck, I do recognize that the rather inconclusive (in a grand sense) death of one particular psychopath isn’t the dawn of a new day, nor is the death of a human being a cause for celebration, no matter how detestable that person might be.

As always, the full piece is worth clicking through to read.

For the first time in the year I’ve been blogging, there will be no post today. Quite frankly, I am sick to my stomach that my fellow countrymen are so stupid and have been paying so little attention to what’s happening that they would give majority governmental power to someone who was a tyrant when he DIDN’T have an unchecked majority.

Regular blogging will resume when I stop vomiting, and when I stop hating the Canadian people.

So in addition to the new site design (I made that header myself – be proud), I’m also updating the blog roll that is on the right sidebar of this page. As threatened, I have removed some that are no longer being updated and have added some new ones that I am following:

I suppose now is the time to shamelessly plug myself (that sounds disgusting). If you have any friends or family members that you think would enjoy or benefit from the stuff on this blog, won’t you consider recommending a couple articles to them? Maybe throw me some link love on your blog or Facebook page? You’re never going to see a ‘Donate here’ button (unless I get fired… but I’d probably just look for a new job) – I give you my very best FOR FREE! Help a brotha out and spread the word, nuh?

I thought I would spice things up a bit by changing the layout. Let me know what you think in the comments – do you like the change or should I go back to the old style?

I’m not sure if anyone is expecting me to comment on the recent catastrophe in Japan, but I’m not going to. A really tragic thing has happened, is still happening, and the effects of it will continue to be felt for many months and years to come. I have no more insight to offer than that, and I won’t make any more comments about it unless a story comes out of the tragedy that intersects with the subject matter of this blog.

Well ladies and gentlemen, one year ago I began this blog in earnest. While the official first post went up a couple months before that, it wasn’t until March that I really hit my stride and began running this blog in more or less its present form. I am inordinately proud to say that in that year, I have never missed a post (despite some close calls around Christmas and while I was traveling). I like to think that my consistency is part of the reason why, in my opinion, this blog has been as successful as it has been.

Since this blog was started, I’ve had a staggering 49,887 hits (give or take a few, depending on what time you’re reading this). A good chunk of those are thanks to being linked a handful of times from Pharyngula, but surprisingly the most popular post got most of its traffic from Stumbleupon, so whoever “Stumbled” it, you have my thanks. As it stands now, I am averaging around 100 hits per day, which has been steady since the new year.

There are a total of 381 posts (including this one) on the site. Assuming an average of ~750 words per post (I aim for 1000, but some of them are short mini-posts so I am rounding down), that’s a total of 285,750 words all told (roughly the same number that are in a Harry Potter book, apparently). You and I have contributed a total of 1,236 comments to these posts, the only ones of which I have deleted being my own (and one that was a response to one that I deleted, so I deleted it because it wouldn’t make any sense out of context). And spam, obviously (2,100 spam comments deleted – go Akismet!).

What have I been writing about?

The following graph shows the breakdown of the top 10 subjects tagged in my posts. Please keep in mind that each post may (and often does) have several different tags at the same time. 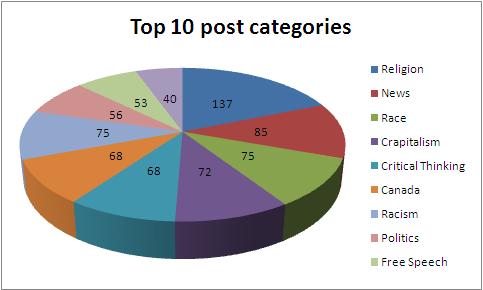 It’s perhaps unsurprising that religion is such a large slice of the pie chart, as many of my thought pieces have been on that topic. The interests of this blog have bloomed from simply talking about race, religion and free speech, and a similar chart drawn a year from now will probably look very different.

When I started this blog, it was largely at the request of friends, and also partially to (unsuccessfully) impress a girl – side note: there is a girl (and I’m pretty sure she’s the only one) who is impressed by a guy who blogs about race, religion and free speech, but she lives very far from me so I’ll have to fall back on the whole “being a rock star” thing for now. I didn’t have a coherent idea of what I was going to do at the time, but in the past year I’ve become more aware of where the niches are in the blogosphere, and I am going to try and exploit some of those more directly.

I plan on retiring and replacing the current theme/background. While it has served me quite well, it’s time for a change. I plan to register the domain crommunist.com and take WordPress out of the title, so look forward to that (if you have bookmarks don’t worry: you will be automatically forwarded). I’m also going to reach out to some of the blogs I read and see if I can get some more collaboration going on. The only fallout from all of this for you, my dear readers, is that there will be the same content (possibly more) with a new shiny look.

It’s been a great year for me, both blog-wise and life-wise. I’m looking forward to more great things in the coming year. You readers have been a big part of what made this so great – there were times when I felt like giving up and putting the whole “blog” thing on hiatus, but knowing you’re out there and reading my random cranial ejaculations keeps me focussed. The many supportive comments and e-mails I’ve received mean more to me than you know. A quick note to the few of you who have hung around to disagree with me: while I may not always be charitable in my responses, I do value your input and am glad to have opposing viewpoints expressed here.

Anyway, thanks for making this such a great year for me, and I promise I’ll keep doing my part!