Those of you who remember our discussion of System Justification Theory will recall that it posits (and goes on to demonstrate) that there are three overriding domains by which we guard our self-worth: ego motivation (“I like me”), group motivation (“I like us”) and system justifying motivation (“I like the way things are”). The balancing of these three motivations explains a great deal of behaviours that seem counter-intuitive or self-defeating, particularly in circumstances where power imbalances between groups are concerned.

When we consider race as a power imbalance, we would expect to find that the majority group is strongly motivated to preserve its ego when the fairness of the system is at risk. In other words, when confronted with a world that is clearly racist, there is considerable psychological pressure for members of the majority group to salvage their ego – the stereotypical “I’m not a racist” response. With the threat to our egos thus avoided, members of majority groups are then free to continue participating in an unfair system, confident in the knowledge that the ‘real’ problem is those ‘other’ people.

A fascinating new study from the Journal of Personality and Social Psychology sheds some light on the depths to which this behaviour can sink:

In a series of new studies from the Kellogg School of Management at Northwestern University, researchers report two new findings. First, when people worry that their behavior could seem racist, they point to past opportunities for racism they had been faced with but passed up—the “racist road not taken”—that ironically increases people’s willingness to express less racially sensitive views. Second, people actually distort their memories and convince themselves that they previously passed up opportunities for racism—opportunities that did not, in fact, exist.

“Our research suggests that people demonstrate remarkable flexibility when it comes to convincing themselves that they have proven their lack of prejudice,” said Daniel A. Effron, lead author of the studies and visiting assistant professor of management and organizations at the Kellogg School of Management. “The ability to point to blatantly racist behaviors that they didn’t perform seems sufficient for people to feel that they have non-racist credentials—even if virtually no one would have chosen to perform those racist behaviors. People are essentially willing to make a mountain of proof out of a molehill of evidence. “What’s more, our results show that people are willing to go even farther and invent the molehill, convincing themselves that they passed up opportunities for racism that they didn’t actually have,” continued Effron.

If you wish to read the full article, I have tried to make it available here (please do let me know if it doesn’t work).

A series of studies invited college students to choose between accusing a clearly guilty white suspect of a hypothetical crime, or a clearly innocent suspect who was black. In nearly all cases, the participants chose to accuse the white suspect (so hooray for progress). Participants in the study who chose to accuse the white suspect rather than the black suspect rated themselves as being more generally likeable than those who were asked to choose between two white suspects. In other words, they behaved exactly as SJT would expect, and bolstered their egos by clearly choosing to be “not a racist”.

Those of us who participate in racial conversations are aware that there is often not a ‘clear cut’ way of objectively identifying racist content in statements. There is a gradient of the level of agreement you’ll get from people identifying a statement as racist with “chink” at one end and “really good at math” at the other, and a whole lot of feverish denials and uncomfortable Thanksgiving dinners in between. The authors of this study explored whether or not an ability to remember “not racist” behaviour gives people psychological license to find things “not racist”, asking them to perform the same ‘identify the guilty’ task, and then rating statements for racist content: 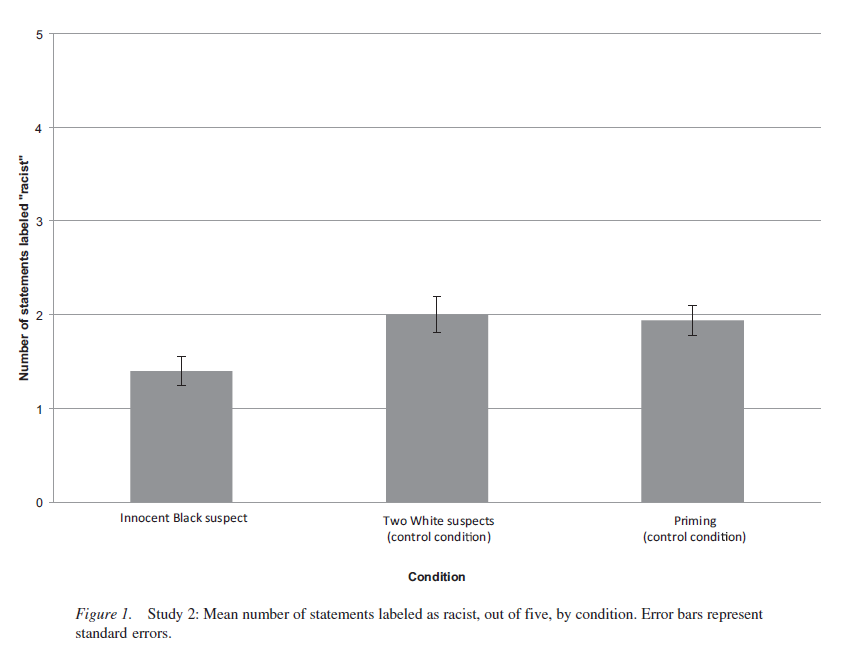 As you can see from the above figure, while the effect size is comparatively small, the relationship is statistically significant: when given an opportunity to remember how “not racist” they were in not accusing a clearly innocent black person of a crime, participants were more likely to ‘go easy’ on themselves when deciding whether or not a racist statement had been made. In other words, having a recent example of yourself being “not racist” makes you more likely to ignore racism in your environment.

While much of the focus of discussions about racism tend to focus on overt displays of hatred, many forms of racism happen in environments where no interpersonal animus is necessary or possible. These can be incredibly damaging at a systematic level, as we have seen elsewhere. The question the authors explored is whether or not having a “not racist” cognitive escape route made people more justified in preferring their own group (white people) to an out-group (in this case, black people). They were asked to hire a police officer (either white or black), and to divide a pool of money between an organization that served either a predominantly black or a predominantly white community: 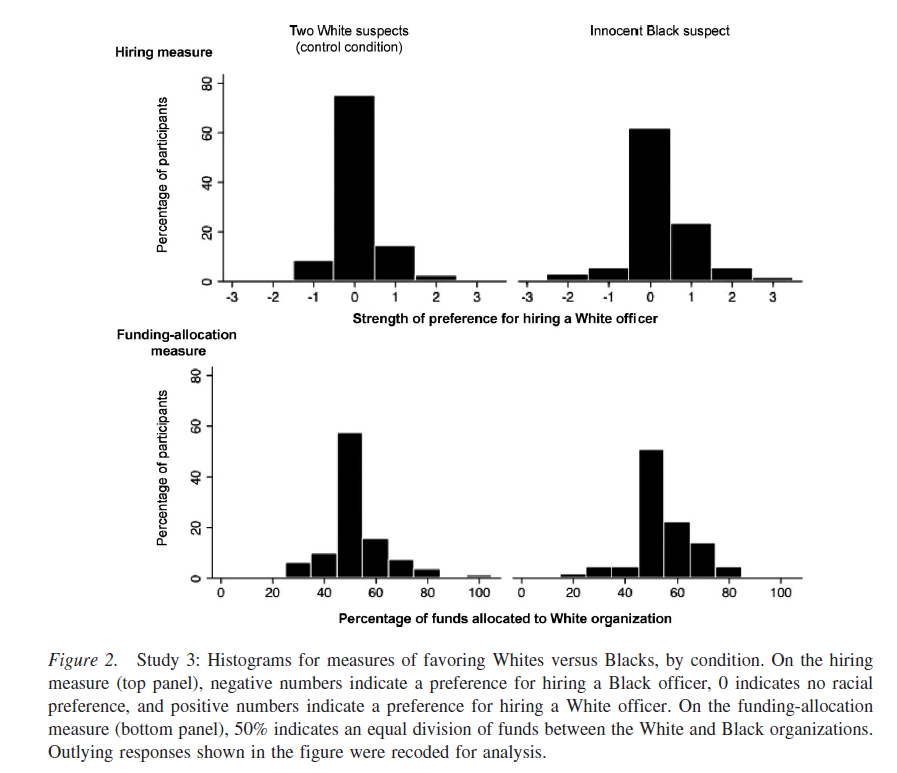 As above, we see a small but noticeable shift in attitudes when given the opportunity to appear “not racist” by exonerating a black person who is clearly innocent, allowing people to feel more comfortable favouring their own racial group. In the presence of a salient reminder of how racially virtuous and non-prejudiced they are, members of majority groups (in this case, white people) feel greater freedom to make hiring or funding allocation decisions based not on merit (which would be equal in this particular case), but rather on an explicitly racial criterion*.

I will have to continue this exploration in a subsequent post, because the other findings of this study are more fascinating still.

*There is a counter-argument that white people, assaulted as they are at all times by white guilt, are moving toward a merit-based system (that just happens to favour white people) from one where they explicitly favour the racial out-group for reasons of arch-liberal “fairness”. I am skeptical of that interpretation, in the context of the above examples and the rest of the literature.